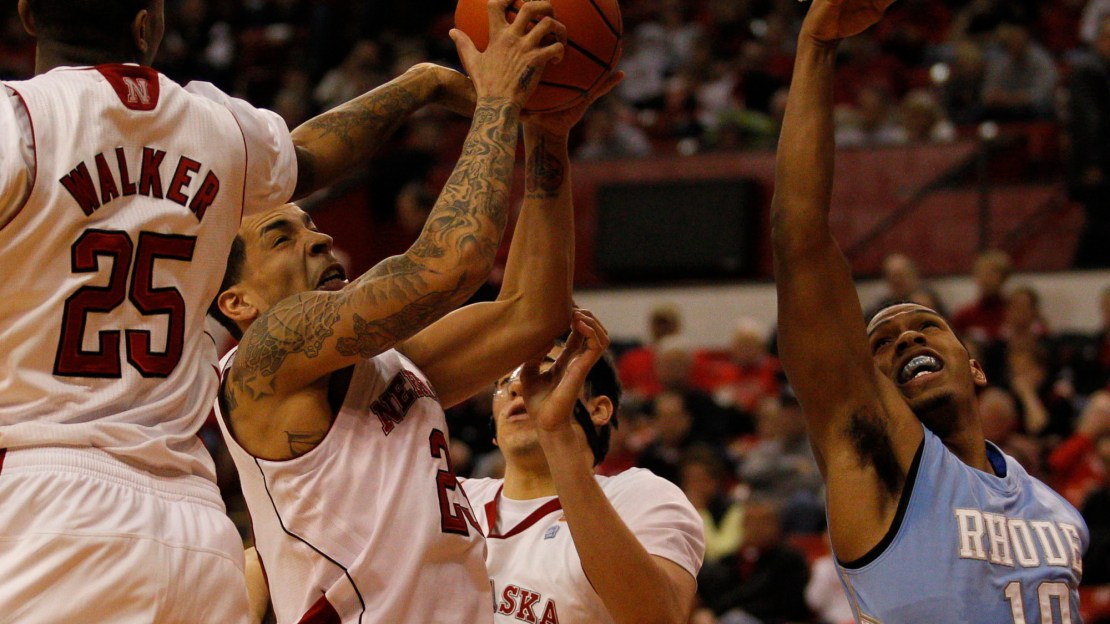 BTN aired a tripleheader of Big Ten men's hoops action Sunday, with Nebraska and Michigan State winning and Iowa falling to Creighton. In other action, Northwestern won the Charleston Classic, Purdue lost in the finals of the Puerto Rico Tip-Off and Penn State escaped. You can catch up on all the action and stats on our BTN men?s basketball scoreboard. Also, dive into this post for updates and video highlights. Watch our Nebraska highlights from its easy victory over Rhode Island now.

FINAL: Behind a solid offensive effort, Nebraska defeated Rhode Island 83-63 on Sunday at Bob Devaney Sports Center in Lincoln. The Cornhuskers outscored their season average of 64.5 points per game by a large margin. Nebraska shot 58 percent from the field (32-of-55). The Cornhuskers were on fire from beyond the arc during the game, shooting 45 percent (10-of-22). Orion Outerbridge was a bright spot for the Rams in the loss with 24 points. A 27-6 run over 10:45 helped Nebraska take a 20-point lead in the half. Bo Spencer capped the run off with a free throw to help the Cornhuskers lead 40-20 at the half. Spencer sparked the Cornhuskers as he had 23 points and made 8-of-11 shots from the floor for Nebraska in the game. Caleb Walker shot 7-of-8 from the field and scored 17 points for the Cornhuskers. Along with Spencer's work and Walker's stellar play, Dylan Talley chipped in 15 points. Rhode Island shot just 38 percent from the field (23-of-61). In addition to Outerbridge's performance, Jamal Wilson racked up 14 points.

HALFTIME: The rout is on, as Nebraska has jumped out to a 40-20 lead over Rhode Island at the half. Leading 16-9, the Cornhuskers went on a 13-0 run to open up a 29-9 advantage. Bo Spencer's big game so far includes 12 points. The Rams' Jamal Wilson already has six points.

FINAL: Tim Frazier scored 27 points to lift Penn State to a 53-49 win over South Florida on Sunday at Mohegan Sun Arena in Uncasville in the Hall of Fame Tip-Off Naismith. The Nittany Lions were trailing when Frazier converted a field goal with 4:01 remaining to give they a lead they would not relinquish. Penn State built a six-point advantage on a free throw by Matt Glover with 28 seconds to go, but nearly blew it. The Nittany Lions went 14-of-21 from the charity stripe as a team (67 percent). To go with Frazier's efforts, Jermaine Marshall contributed 14 points. Blake Nash contributed 14 points for the Bulls in a losing effort. South Florida had trouble finding its touch, shooting just 34 percent (14-of-41) from the field. The Bulls shot 16-of-20 from the free throw line. In addition to Nash's efforts, Toarlyn Fitzpatrick scored 11 points.

HALFTIME: Penn State and South Florida go into the half even at 17, with big performances so far from Jermaine Marshall and Hugh Robertson. Most of the Nittany Lions' offense has come from Marshall and Tim Frazier, who have scored 16 of the team's 17 total points. Marshall has scored eight and Frazier has added eight. The Bulls' leading scorer, Victor Rudd, has been shut down thus far. He enters halftime with zero points. South Florida's Robertson has four points.

FINAL: Creighton used its efficient offense to power past Iowa 82-59 on Sunday at Wells Fargo Arena in Des Moines. The Bluejays shot 56 percent from the field (32-of-57). Creighton was hot from long range, hitting 9-of-20 threes for a 45 percent night from beyond the arc. When the second frame got underway, the Bluejays took control of the game. Creighton led 48-34 with 16:59 remaining in the game before it widened the margin to 30 points with an 18-2 run that ended midway through the second half. Doug McDermott sparked the Bluejays as he scored 25 points and went 10-of-15 from the field in the victory. Besides McDermott's production, Gregory Echenique added 15 points and Avery Dingman contributed 14 points. Josh Oglesby contributed 14 points for the Hawkeyes in the loss. Iowa had trouble finding its touch, shooting just 37 percent (21-of-57) from the field. Aside from Oglesby's performance, Matt Gatens registered 13 points. Creighton was winning 36-25 late in the first half before it went on a 9-1 run to extend its lead to 19 points late in the first half. Josh Jones capped the run off with a field goal that helped the Bluejays lead 45-29 at the half.

HALFTIME: Doug McDermott scored 17 points for Creighton in the first half to carry it to a 45-29 lead over Iowa. Leading 12-10, the Bluejays went on a 10-0 run to open up a 22-10 advantage. Creighton fired often and fired with accuracy from distance, hitting 70 percent (7-of-10) of its three-point attempts. The Hawkeyes have been more effective from beyond the arc than the inside and might want to attempt more three-point shots in the second half after shooting 43 percent (3-of-7) from three-point range in the first half. Matt Gatens' big game so far includes 11 points.

FINAL: Austin Thornton paced Michigan State with 13 points to lead the Spartans to a 69-47 victory over Arkansas-Little Rock on Sunday at Jack Breslin Student Events Center in East Lansing. The Spartans shot 25-of-41 from the free throw line. Along with Thornton's performance, Keith Appling scored 12 points. Will Neighbour had 11 points for the Trojans in the game. Arkansas-Little Rock shot just 31 percent from the field (17-of-55). Michigan State never trailed. The Spartans' largest lead was 24, which came with 36 seconds to go.

HALFTIME: Brandon Wood has nine points on 3-of-5 shooting to lead Michigan State to a 32-22 lead over Arkansas-Little Rock at the end of the first half. Things could be worse for the Trojans as the Spartans led by as many as 16 in the half. Michigan State was able to draw fouls and get to the line with regularity. The Spartans attempted 16 free throws in the first 20 minutes. Daylon (Chuck) Guy, the leading scorer this season for Arkansas-Little Rock, has not made much of an impact through the first 20 minutes. He enters halftime with zero points. D'Andre Williams' big game so far includes five points.

FINAL: Trevor Releford scored 20 points and Tony Mitchell added 14 points and 10 boards as they teamed up to lead Alabama to a 65-56 victory over Purdue on Sunday at Coliseo de Puerto Rico in San Juan in the the finals of the Puerto Rico Tip-Off. Releford picked up the Crimson Tide with five assists and 5-of-10 shooting from the field. Alabama started the game out strong with an 11-0 run. JaMychal Green knocked down a free throw that capped off the run by the Crimson Tide and helped Alabama lead 24-23 at the half. Ball movement led to 15 assists on its 23 baskets for the Crimson Tide. Besides Releford's production and Mitchell's stellar play, Green recorded 14 points and Levi Randolph chipped in 12 points. Kelsey Barlow tallied 11 points, corralled five rebounds, and went 4-of-7 from the field for the Boilermakers in the loss. Purdue shot just 36 percent from the field (20-of-56). To go along with Barlow's efforts, Robbie Hummel scored 17 points. Winning the battle on the boards was crucial for Alabama as it grabbed 36 rebounds to 29 for the Boilermakers.

HALFTIME: JaMychal Green has eight points to lead Alabama to a 24-23 lead over Purdue at the end of the first half.  The leading scorers on both sides have been held in check so far. The Crimson Tide's Tony Mitchell and the Boilermakers' Robbie Hummel have both been held in check during the first half. Mitchell has four points and Hummel has scored two. The situation might've been even worse for Purdue, as Alabama led by as many as 12 points in the half.  The Crimson Tide shared the ball, finishing with seven assists on nine field goals in the first half.  The Boilermakers' Lewis Jackson already has eight points and six rebounds.

FINAL: Northwestern trailed in the waning moments of Sunday's game, but took the lead for good on a field goal by Drew Crawford and hung on for an 80-73 triumph over Seton Hall at TD Bank Arena in Charleston in the final of the Charleston Classic. Herb Pope stuffed the statsheet for the Pirates in the loss. Pope had 32 points and made 14-of-17 shots from the floor. Crawford and John Shurna had good games for the Wildcats. Crawford contributed 27 points and knocked down 11-of-15 shot attempts. Shurna tallied 19 points. Down 67-65 with 3:20 remaining, Northwestern broke out for a 14-4 run to take an eight-point lead with 17 seconds to go. The Wildcats shot 55 percent from the field (28-of-51). Aside from Crawford's performance and Shurna's stellar play, Luka Mirkovic racked up 12 points. Seton Hall hit 49 percent of its field goals (29-of-59). The Pirates were on fire from beyond the arc during the game, shooting 48 percent (10-of-21). In addition to Pope's performance, Jordan Theodore scored 16 points and Fuquan Edwin tallied 10 points. Not only did Northwestern go to the line 13 more times than did Seton Hall, it made the most of its opportunities, converting 17-of-19. The Pirates committed 19 fouls and shot 5-of-6 from the line.