Dienhart: What I Learned in Week 12 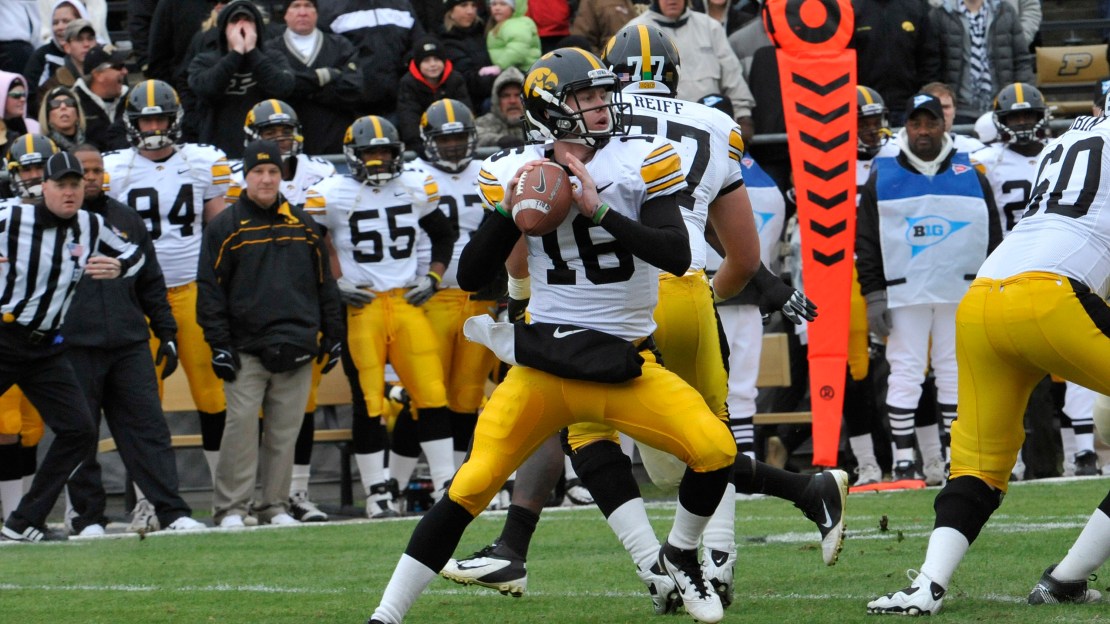 An interesting Saturday saw champions crowned in each division and one team clinch a spot in the inaugural Big Ten title game. Northwestern also became bowl eligible for a school-record fifth season in a row. But what else did I learn this weekend?

1. Wisconsin and Michigan State are the best teams. And, you know what? It?s not really close. The Badgers showed resiliency and moxie in willing themselves to a workmanlike 28-17 win at Illinois. That sets up a winner-takes-all game when Penn State visits Madison next Saturday. Meanwhile, the Spartans looked thoroughly dominating in dispatching Indiana, 55-3. It was MSU?s third win in a row and helped it clinch the Legends Division title.

2. I?m not sure who the top quarterback is in the Big Ten. Is it Wisconsin?s Russell Wilson? Michigan State?s Kirk Cousins? Northwestern?s Dan Persa? Michigan?s Denard Robinson? Iowa?s James Vandenberg? I think strong cases could be made for all in their bid to be the All-Big Ten signal-caller.

4. Michigan looks headed for an at-large BCS bowl bid. It?s true. Coming off a dominating 45-17 win over Nebraska, the Wolverines are 9-2. A victory over visiting Ohio State on Saturday would make Big Blue 10-2, which may be good enough to earn the school its first BCS bowl since the 2006 season. The Big Ten has had at least two teams in the BCS every season since 2005.

5. Penn State still has life. With the program and school embroiled in a sordid off-field controversy and coming off a loss to Nebraska that snapped a seven-game winning streak, the Nittany Lions nonetheless rebounded with a methodical 20-14 win at Ohio State. The victory clinched a share of the Leaders Division crown for Penn State. The Nits can thank a strong defense (289 yards allowed) and powerful ground game (239 yards) in leading the team to victory in Columbus. Now comes a trip to Wisconsin next Saturday that will see the victor advance to play Michigan State in the inaugural Big Ten title game.

BIGGEST SURPRISE: I was shocked with the ease with which Michigan dispatched visiting Nebraska, taking a 45-17 decision. Behind the great play of QB Denard Robinson, a killer defense and mistakes by the Cornhuskers, the Wolverines rolled. Yes, Michigan can?t win the Legends, as Michigan State clinched the crown. But the Wolverines still could earn an at-large BCS bowl berth if they win next week vs. an Ohio State team that has won seven in a row over Michigan.

BIGGEST DISAPPOINTMENT: Purdue had a chance to become bowl eligible for the first time since 2007 on senior day vs. a slumping Iowa team. Alas, the Boilermakers were flat, especially an offense that scored only one meaningful touchdown in a 31-21 loss. Now, Purdue must win at Indiana next week to become bowl eligible.

TOP GAME: There weren?t many high-drama games. The best of the lot was Wisconsin?s come-from-behind 28-17 victory at Illinois. The Badgers fell behind, 14-0, and trailed, 17-7, at halftime, but didn?t panic even though a loss would mean the end to Wisconsin?s Leaders Division title hopes (see the standings). The Badgers turned to their trademark strong ground game to take over in the second half, while the Wisconsin defense turned up the heat by generating four turnovers and allowing no second-half points.

TOP RUSHER: Wisconsin?s Montee Ball figuratively put the Badgers on his back at Illinois, carrying a career-high 38 times for a career-high 224 yards in a 28-17 victory. The triumph sets up a de facto Leaders Division title game next week at Wisconsin when Penn State comes to town.

TOP PASSER: Iowa?s James Vandenberg and Michigan State?s Kirk Cousins share this honor. Vandenberg hit 22-of-32 passes for 273 yards with three touchdowns in a 31-21 win at Purdue. Cousins connected on 16-of-23 passes for 273 yards and three scores in a 55-3 win over Indiana to help the Spartans clinch the Legends Division crown.

TOP SPECIAL PLAY: Nebraska K Brett Maher was one of the few bright spots in an otherwise dismal day for the Huskers in a 45-17 loss at Michigan. Maher hit a 51-yard field goal, two extra points and averaged 50.5 yards on six punts with four boots inside the 20-yard line.

SNEAK PEEK AHEAD: All eyes will be on Wisconsin, where Penn State travels to play the Badgers in a game that will see the winner claim the Leaders Division title and trip to the Big Ten title game to play Michigan State. Purdue will be trying to become bowl eligible for the first time since 2007 when it travels to Indiana, which beat the Boilermakers last season. And a 10th win by Michigan over visiting Ohio State would enhance its at-large BCS bowl hopes.