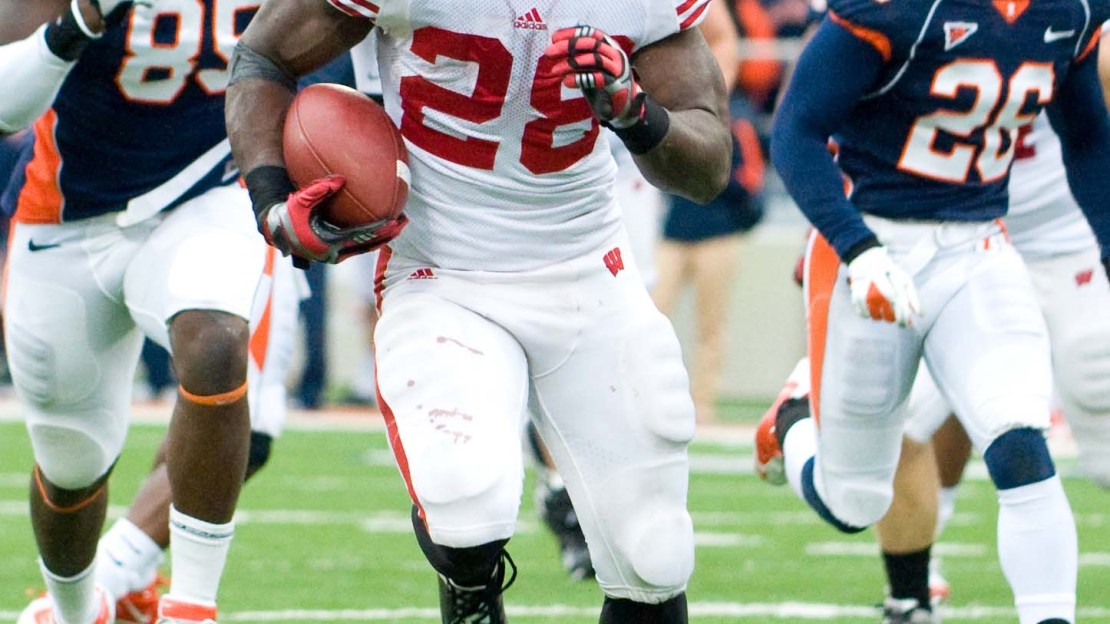 (AP) Montee Ball rushed for 224 yards and Wisconsin forced four turnovers in a 28-17 comeback win against Illinois on Saturday. The slumping Illini jumped out to a 14-0 lead in the second quarter and carried a 17-7 advantage into halftime. But Ball had a 5-yard TD run after Wisconsin recovered a fumble, pulling the Badgers within three early in the third quarter. The Badgers kept up the pressure, grabbing the lead for good on quarterback Russell Wilson's 1-yard TD run that made it 21-17. Wilson's team only had to go 44 yards for the go-ahead score after a 74-yard punt buried the Illini at their own 3. Donovonn Young rushed for two TDs for Illinois. He finished with 43 yards on eight carries. Read the full AP recap, see the box score and view our Big Ten scoreboard.

FINAL: One of the best running backs in the Big Ten, No. 13 Wisconsin's Montee Ball ran all over Illinois, carrying Wisconsin (9-2) to a 28-17 victory on Saturday at Memorial Stadium. Ball, who came in ranked No. 1 in the conference in rushing yards at 1242 on the year, rushed 38 times for 221 yards and two touchdowns. Illinois (6-5) at one point held a commanding lead, but failed to close out the Badgers. Wisconsin showed its competitive spirit in digging itself out of a 14-point hole and pulling out the win. The Badgers' defense was stifling as they shut down Wisconsin's offensive attack. The Badgers' defensive unit stood firm against the Fighting Illini's offense, holding Illinois to 302 total yards. Nathan Scheelhaase threw for 110 yards while going 17-21 for the Fighting Illini. He threw one interception. Scheelhaase also ran for 28 yards on eight attempts. Jon Davis was the player Scheelhaase targeted most often. He hauled in five catches for 53 yards. Wisconsin's Russell Wilson was good for 90 yards during the game, completing 10 of 13 passes. Wilson tossed one touchdown and no interceptions. Wilson had a trusted receiver in Nick Toon. He hauled in six catches for 67 yards. The Badgers racked up 284 total yards. Along with Wilson's stats in the passing game, Wisconsin also added 194 yards rushing on 45 attempts.

FOURTH QUARTER: Wisconsin trailed by 14 points earlier in the game, but came all the way back to take the lead over Illinois, and held on for a 28-17 win. With 5:00 remaining in the second quarter, the Badgers trailed big, but Wisconsin fought back to regain the advantage. The Badgers went on a 21-point run to close the game. Russell Wilson's one-yard touchdown run put a bow on Wisconsin's four-play, 44-yard drive and put the Badgers on top for good. Wisconsin started in good field position when the Badgers returned a punt. Wisconsin added to its advantage when Montee Ball pounded in a 17-yard touchdown run, the final play on a four-play, 37-yard drive to give the Badgers the lead, 28-17. An interception by Aaron Henry set Wisconsin up to start the drive.

THIRD QUARTER: Wisconsin trailed by 14 points earlier in the game, but has come all the way back to take a 21-17 lead over Illinois at the end of the third quarter. The Badgers trailed by that margin with 5:00 left in the second, but have since dug in and taken the lead back. Wisconsin stifled the Fighting Illini's offense, giving up just 20 total yards in the quarter. Illinois has given up the last 14 points. The Badgers closed the gap to 17-14 when Russell Wilson threw a five-yard touchdown pass to Montee Ball to cap a 30-yard drive. A fumble recovery by Wisconsin set the Badgers up to start the drive. Wisconsin went to the air just two times on that drive. Wilson's one-yard touchdown run finished off a four-play, 44-yard drive and gave the Badgers the lead, 21-17. Wisconsin started in good field position when the Badgers returned a punt. Ball clinched a 100-yard rushing game with 74 in the quarter, part of his 134-yard day through three quarters for Wisconsin. The Badgers will start the fourth quarter with possession.

FIRST QUARTER: Fans were treated to more punts than points in the first quarter, and the game is tied 0-0 at the end of the first quarter. The teams' stale offenses boomed a total of three punts in the quarter. Illinois has the ball at No. 13 Wisconsin's 27-yard line to begin the second quarter.

Four of 5 possessions in second half have resulted in turnover for #Illini. This time Scheelhaase intercepted.

The naked boot is your daddy Illinois. How do you play Wisconsin & not know that's coming from #AllRussellWilsonEverything

Tough day for Ryan Groy to say the least…

Illinois with not one but TWO offensive pass interference penalties in the final minute of the half.

The last time #Illini RB Donovonn Young scored a TD was against Northwestern. 2 in the first half vs. Wisconsin.

Whitney Mercilus with his 8th forced fumble of the season, thing the Big Ten record. Brown recovers and the #Illini are in business!

Clearly, the #Badgers aren't the same team away from Camp Randall Stadium. No other explanation.