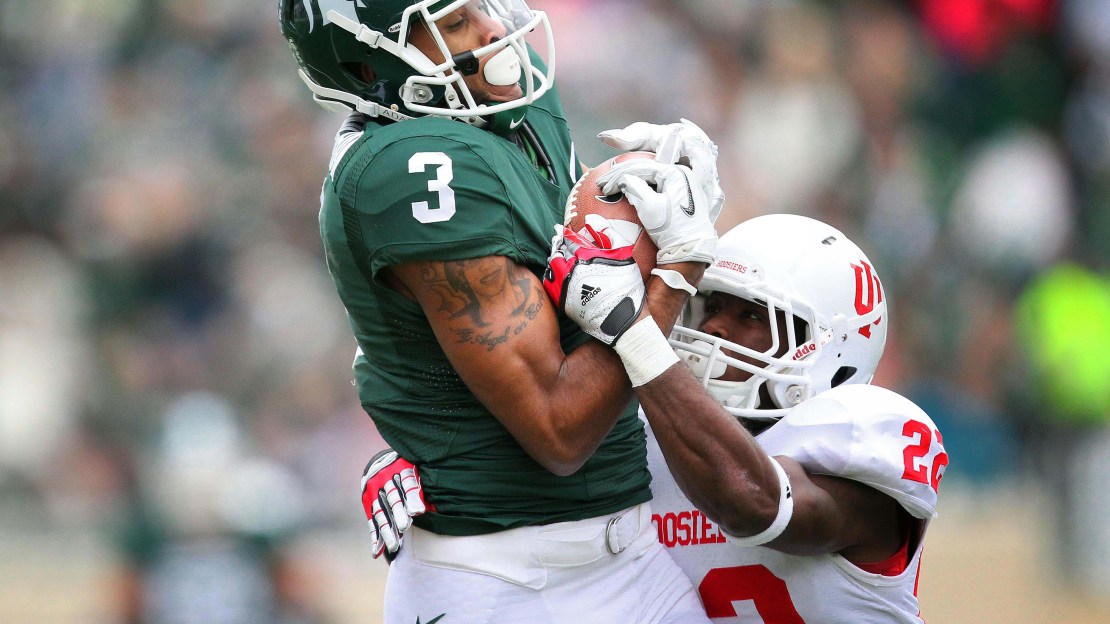 (AP) Kirk Cousins threw for 273 yards and three touchdowns in just over a half as No. 12 Michigan State moved a step closer to the Big Ten championship game with a 55-3 rout of Indiana on Saturday. The Spartans entered the game with a one-game lead over both Nebraska and Michigan, who were playing at the same time in Ann Arbor. The Wolverines were leading in the fourth quarter, which would lock Michigan State (9-2, 6-1 Big Ten) into the conference's first championship game because of its 28-14 win over Michigan on Oct. 15. Read the full AP recap, see the box score and view our Big Ten scoreboard.

FINAL: The Indiana secondary didn't have an answer for B.J. Cunningham all day, as he led No. 12 Michigan State to a 55-3 victory on Saturday at Spartan Stadium. Cunningham, who entered the game ranked No. 8 in the conference in receiving touchdowns with five, caught six passes for 132 yards and two touchdowns. Michigan State's (9-2) offense dominated, ripping off huge chunks of yardage. The Spartans burned Indiana's defense for six plays of more than 20 yards. With 6:24 to go in the first quarter, Kirk Cousins and Cunningham hooked up for a 63-yard touchdown, Michigan State's longest play on the day. The long touchdown gave the Spartans a 10-0 lead. Michigan State's Cousins was good for 273 yards during the game, completing 16 of 23 passes. Cousins finished the game with three touchdowns and no interceptions. Cousins' favorite target on the day was Keshawn Martin. He caught eight passes for 100 yards and one touchdown. The Spartans finished with 469 total yards, including 297 yards passing while completing 21 of 31 attempts. Rushing was a key ingredient in Michigan State's offensive mix, bringing it 172 yards on 34 carries. Indiana's (1-10) offense finished the game having gained 237 yards, including 142 passing yards on 15 completions. The Hoosiers' ran for just 95 yards on 37 attempts.

FOURTH QUARTER: Michigan State finished off its blowout of Indiana with a strong fourth quarter and won 55-3. The Spartans made their lead 55-3 when Edwin Baker pounded in a three-yard touchdown run on the last play of a 10-play, 41-yard drive. Michigan State started in good field position when Keshawn Martin returned a punt. The Spartans had no play longer than nine yards on the drive. Michigan State's Martin hit 100 yards receiving for the game in the quarter, part of his 100-yard, eight-reception performance.

THIRD QUARTER: Michigan State sniffed out Indiana's rushing attack in the third quarter, holding the Hoosiers to 15 rush yards and the Spartans now lead 48-3. Michigan State added to its advantage when Kirk Cousins found B.J. Cunningham open for a seven-yard touchdown pass, the clincher of an eight-play, 68-yard drive to give the Spartans the lead, 41-3. Michigan State made the score 48-3 when Indiana failed to convert on fourth-and-2. The Spartans' Cunningham hauled in four catches for 32 yards in the quarter to put him over 100 yards receiving for the game. Cunningham has 132 yards on the day so far. Michigan State will start the fourth quarter with good field position on the Hoosiers' six-yard line.

FIRST QUARTER: No. 12 Michigan State's four big plays, including Kirk Cousins' 37-yard pass, led to 17 points and the Spartans lead 17-0 at the end of the first quarter. Michigan State scored when Dan Conroy kicked a 21-yard field goal to put a bow on an eight-play, 65-yard drive, giving the Spartans the game's first lead. Michigan State's drive was highlighted by. The Spartans opened up the lead, 10-0, after Cousins found B.J. Cunningham open for a 63-yard touchdown pass to end a three-play, 76-yard drive. Michigan State expanded its lead to 17-0 thanks to a five-play, 70-yard drive that ended when Cousins threw a 47-yard touchdown pass to Keshawn Martin. After just one quarter of play, the Spartans' Cunningham has already clinched a 100-yard receiving day, hauling in two catches for 100 yards. Michigan State has the ball on Indiana's 47-yard line to begin the second quarter.

B.J. Cunningham now has 20 TD catches, tied with Andre Rison and Plaxico Burress for 3rd-most on the #Spartans all-time list.

This game marks the 28th time since the start of the 2005 season that IU has given up more than 40 points.

Dantonio gives Cousins the curtain call. Maxwell gets him on second down. Well-executed moment.

MSU has outscored its last two opponents (Iowa and Indiana), 65-10, in the first half. #MSUIU

It's important for new coaches to continue old school traditions. In Indiana's case: Not covering receivers.