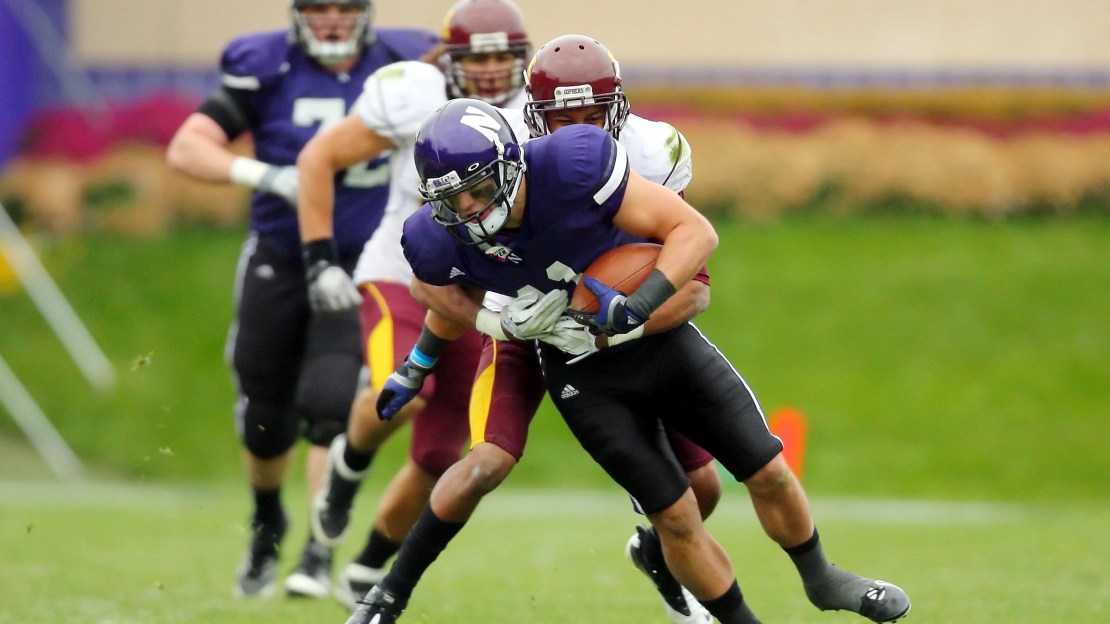 (AP) Dan Persa threw for 216 yards and two touchdowns, and Northwestern won its fourth straight, beating Minnesota 28-13 on Saturday. Venric Mark came through with two big kickoff returns as the Wildcats (6-5, 3-4 Big Ten) scored touchdowns on their first three possessions to build a 21-7 lead. That set the tone as Northwestern became eligible for its fourth straight bowl appearance. The Wildcats lost five in a row after winning their first two and appeared to be going nowhere, but they turned it around in a big way with lopsided wins over Indiana and Rice sandwiched around a tight stunner at Nebraska. Read the full AP recap, see the box score and view our Big Ten scoreboard.

FINAL: Dan Persa and Jacob Schmidt teamed up to lead Northwestern to a 28-13 victory over Minnesota on Saturday at Ryan Field. Persa passed for 216 yards, while Schmidt ran for 69 yards and one touchdown.  Even though Minnesota (2-9) racked up the yards against Northwestern (6-5), the Golden Gophers weren't able to secure the victory. The Wildcats were burned for 393 total yards, but their defense stiffened up when it mattered the most. MarQueis Gray did his best to carry Minnesota's offense, turning 26 carries into 147 rushing yards and one touchdown. Northwestern's offense finished the game having gained 368 yards. The Wildcats complemented Persa's passing with 152 yards rushing on 47 attempts.

FOURTH QUARTER: Northwestern's offense looked sharp in the fourth quarter, scoring seven points, and the Wildcats finished off Minnesota 28-13. Northwestern racked up 78 passing yards and 75 rushing yards in the quarter. The Wildcats opened up the lead, 28-10, after marching down the field for a 14-play, 80-yard drive that ended when Jacob Schmidt turned a handoff into a one-yard touchdown. The Golden Gophers made the score 28-13 after Jordan Wettstein kicked a 48-yard field goal to finish off a 43-yard drive. Northwestern's Dan Persa topped 200 yards passing for the game in the quarter, and finished his day with 216 yards through the air. Minnesota's MarQueis Gray reached the 100-yard rushing mark for the game thanks to 58 in the quarter, and ended his day with 147 yards in all.

THIRD QUARTER: Northwestern and Minnesota combined for a total of no points and three turnovers in a sloppy third quarter and the margin is still 11, as the Wildcats lead 21-10. The Golden Gophers' Duane Bennett hit 100 yards rushing for the game in the quarter, part of his 127-yard rushing performance thus far. Northwestern will start the fourth quarter with the ball at its own 17-yard line.

SECOND QUARTER: Minnesota's Duane Bennett led the offense in the second quarter. He ran for 44 yards, but the Golden Gophers have closed the gap to 21-10. A 58-yard drive that ended when Jordan Wettstein kicked a 28-yard field goal helped Minnesota narrow the deficit to 21-10. The Golden Gophers will get the ball to start the second half.

FIRST QUARTER: Northwestern's Dan Persa led the offense in the first quarter. He threw for 72 yards and two touchdowns and ran for five yards, and the Wildcats lead 21-7 at the end of the first quarter. Northwestern has scored the last 14 points. The Wildcats took the game's first lead after Persa and Kain Colter combined for a seven-yard touchdown on the last play of a five-play, 54-yard drive. Minnesota tied the game at seven after MarQueis Gray kept it himself for a five-yard touchdown run to end a seven-play, 66-yard drive. An eight-play, 43-yard scoring drive by Northwestern snapped the 7-7 standoff, as Persa tossed a 28-yard touchdown to Demetrius Fields. The Wildcats started in good field position when Venric Mark's big kickoff return. Northwestern opened up the lead, 21-7, after marching down the field for a nine-play, 38-yard drive that ended when Treyvon Green ran two yards to paydirt. The Wildcats began the drive with good field position after Northwestern returned a punt. The Wildcats threw just two times on that drive. Northwestern has possession on its own 21-yard line to start the second quarter.

Last interception for the Gophers before the one by Royston was against Miami (Ohio) by Stoudermire. MN last in the nation in takeaways.

Minnesota's defense is worse than the guy who made Corso apologize. NU 21, Minny 7