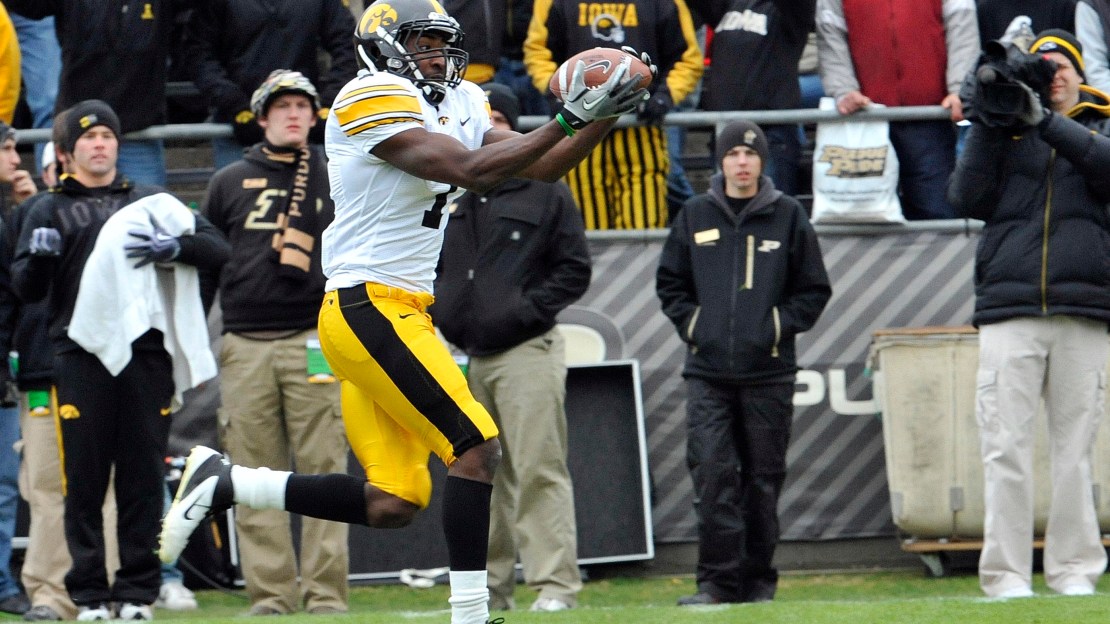 (AP) James Vandenberg threw three touchdown passes, including two to Marvin McNutt, to help Iowa defeat Purdue 31-21 on Saturday for the Hawkeyes' first road win of the season. Vandenberg passed for 273 yards, and McNutt caught nine passes for 151 yards. Marcus Coker rushed for 139 yards on 30 carries for the Hawkeyes (7-4, 4-3 Big Ten), who had lost their three road games by a combined 14 points. The Hawkeyes outgained the Boilermakers 408 yards to 286 but struggled to put away scrappy Purdue. Antavian Edison caught nine passes for 97 yards and Ralph Bolden ran for 71 yards for Purdue on Senior Day. Read the full AP recap, see the box score and view our Big Ten scoreboard.

FINAL: The Purdue secondary didn't have an answer for Marvin McNutt all day, as he led Iowa to a 31-21 victory on Saturday at Ross-Ade Stadium. McNutt, who entered the game ranked No. 1 in the conference in receiving touchdowns with 10, caught nine passes for 151 yards and two touchdowns. Purdue nearly made a 17-point deficit evaporate, but Iowa's (7-4) defense held strong against a late Purdue (5-6) comeback to clinch the victory. Ralph Bolden did his best to carry the Boilermakers' offense, turning 14 carries into 70 rushing yards and one touchdown. Purdue's offense finished the game having gained 280 yards, including 181 passing yards on 17 completions. The Boilermakers' rushing attack contributed just 99 yards to the total, with the tally coming on 36 carries. The Hawkeyes' James Vandenberg was good for 273 yards during the game, completing 22 of 32 passes. Vandenberg tossed three touchdowns and no interceptions. Tanner Miller showed good hands on defense for Iowa, picking off two Purdue passes. He came up big during a crucial moment in the second quarter, when he intercepted Robert Marve on third-and-4 and returned it 81 yards. The Hawkeyes racked up 407 total yards. Iowa complemented Vandenberg's passing with 134 yards rushing on 43 attempts.

FOURTH QUARTER: Iowa got things going through the air, passing for 81 yards in the quarter, and the Hawkeyes kept the game out of reach for a 31-21 victory over Purdue. Iowa added to its advantage when James Vandenberg and Marvin McNutt combined for a 51-yard touchdown, capping off a two-play, 55-yard drive to give the Hawkeyes the lead, 31-14. A 58-yard drive that ended when Ralph Bolden turned a handoff into an 11-yard touchdown helped the Boilermakers narrow the deficit to 31-21. Iowa's McNutt topped 150 yards receiving for the game in the quarter, and finished his day with 151 yards on nine catches. The Hawkeyes' Vandenberg passed for 81 yards in the quarter to put him over 200 yards for the game. Vandenberg finished with 273 yards through the air.

THIRD QUARTER: Iowa stuffed the run, giving up just 24 yards on the ground in the third quarter and the Hawkeyes now lead 24-14. Purdue has given up 10 straight points. Iowa opened up the lead, 24-14, after marching down the field for a nine-play, 54-yard drive that ended when Mike Meyer made a 36-yard field goal. The Hawkeyes' Marcus Coker topped 100 yards rushing for the game in the quarter, and has plenty of time to add to his 131 total yards on the ground. Iowa will start the fourth quarter with the ball at its own 49-yard line.

SECOND QUARTER: Iowa held Purdue to 17 yards through the air during the second quarter and the margin is still seven, as the Hawkeyes lead 21-14. The Boilermakers made the score 14-14 when Purdue recovered a fumble in the endzone. Iowa broke the 14-14 deadlock when Marcus Coker turned a handoff into a two-yard touchdown to put a bow on an 11-play, 70-yard scoring drive. The Hawkeyes' Coker rushed for 37 yards in the quarter to put him over 100 yards for the game. Coker has 100 total yards on the ground so far today. The Boilermakers will start the second half with the ball.

FIRST QUARTER: Iowa put up 14 points in the first, and the Hawkeyes lead 14-7 at the end of the first quarter. Iowa finished with 105 yards through the air and 63 on the ground in the quarter. The Hawkeyes held Purdue to just 19 rushing yards in the quarter. Iowa struck first when James Vandenberg and Marvin McNutt combined for a 26-yard touchdown, the final play of an eight-play, 80-yard drive. The Boilermakers tied things up at seven when a 13-play, 63-yard drive ended after Caleb TerBush and Gabe Holmes hooked up for a 14-yard touchdown. Vandenberg tossed a five-yard touchdown to C.J. Fiedorowicz to break the 7-7 deadlock in favor of the Hawkeyes. The play capped off a 15-play, 81-yard scoring drive. Iowa will start the second quarter with the ball at Purdue's 29-yard line.

If this second-quarter at Iowa-Purdue were any weirder, it would be Gilbert Gottfried.

I think there are few triplets as good as Iowa's triumvirate of Vandenberg, McNutt and Coker.

Those were Iowa's first first-quarter points in a Big Ten road game this season. #hawkeyes