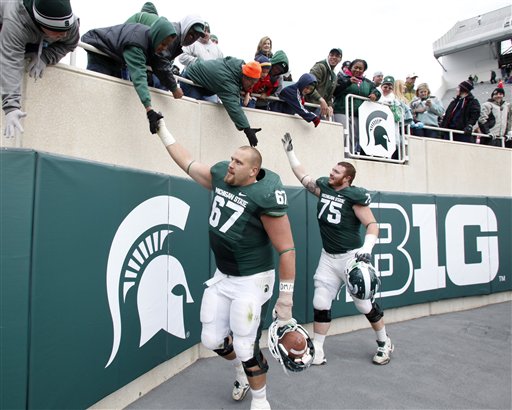 Following the action every Saturday, BTN.com senior writer Tom Dienhart breaks down what every game, every result means for the teams involved and the Big Ten itself. See Tom?s Week 12 Snap Reactions in this post.

Iowa 31, Purdue 21
WHAT IT MEANS: The Boilermakers have to wait another week to try to become bowl eligible for the first time since 2007. The Hawkeye defense yielded just one meaningful touchdown and held Purdue to under 300 yards. Not bad for a unit that has been maligned all season. Iowa?s offensive triplets were stellar, as QB James Vandenberg had 273 yards passing, RB Marcus Coker had 140 yards rushing and WR Marvin McNutt had 9 catches for 151 yards.

Michigan 45, Nebraska 17
WHAT IT MEANS: No unit in the nation has made a more impressive turnaround than the Wolverine defense, which stifled the Cornhuskers by rationing them less than 300 yards. Nebraska quarterback Taylor Martinez was rendered ineffective, hitting only 9-of-23 passes for 122 yards. He also ran 16 times for just 51 yards with a fumble. Conversely, the Michigan offense did what it does so well: run the ball behind QB Denard Robinson and RB Fitzgerald Toussaint. With a season-ending victory over Ohio State next Saturday that would push their record to 10-2, the Wolverines could land an at-large BCS bowl bid.

Northwestern 28, Minnesota 13
WHAT IT MEANS: That?s four victories in a row for Northwestern, which had lost five in a row prior to turning it around. But the most impressive thing from this victory for the Wildcats was the fact they became bowl eligible for a school-record fifth season in a row. QB Dan Persa notched another impressive performance, throwing for 216 yards and two touchdowns to continue his late-and likely improbable-push for Big Ten Player of the Year honors. Minnesota? The good news is there?s only one game left in what has been a tough first season under Jerry Kill.

Michigan State 55, Indiana 3
WHAT IT MEANS: The victory over the Hoosiers, coupled with Nebraska?s loss at Michigan, clinched the Legends Division crown for the Spartans, pushing the program a step closer to its first trip to the Rose Bowl since-deep breath here– the 1988 season. Running (172), passing (297), Michigan State dominated an Indiana team that has lost eight in a row. The good news: The Hoosiers can make their season next week with a win over Purdue, which would deny the Boilers a bowl bid and allow Indiana to retain the Old Oaken Bucket.

Penn State 20, Ohio State 14
WHAT IT MEANS: The offensive struggles for each team persist–especially the passing–in what was an ugly game. The victory clinches a share of the Leaders Division title for the Nittany Lions, but they still must win at Wisconsin next week in a winner-takes-all game to advance to the Big Ten title game. The Buckeyes will play for bowl positioning next week at Michigan, which has lost seven in a row to the Buckeyes.