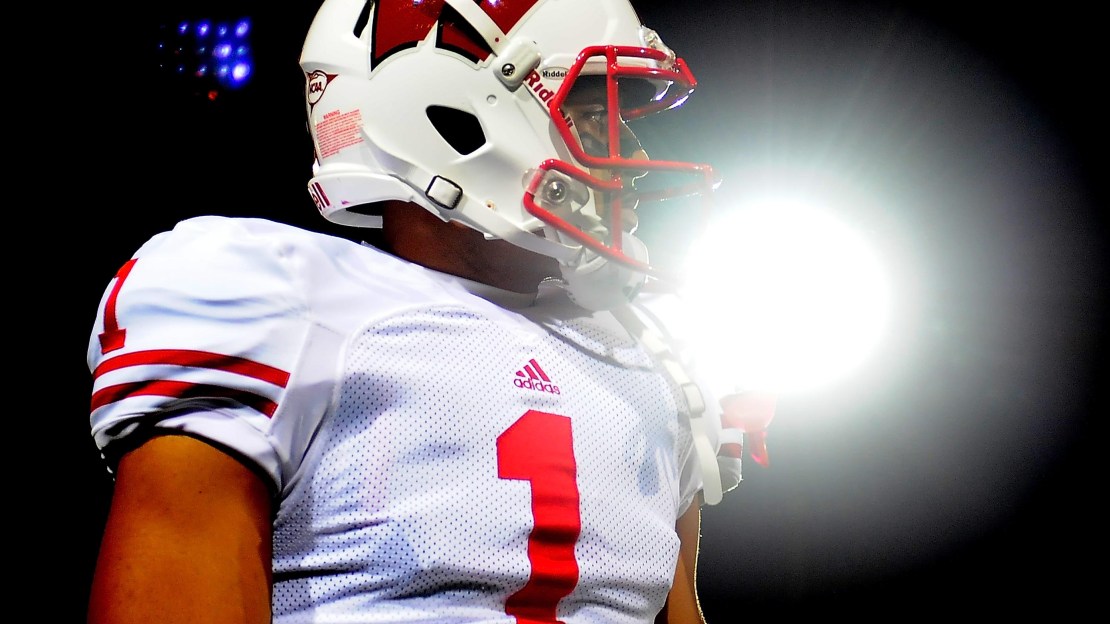 A full slate of games is on tap this weekend and the storylines abound. Michigan State (Legends) and Penn State (Leaders) could clinch shares of their respective divisions, but Wisconsin also controls its destiny in the Leaders and looks to keep pace with the Nittany Lions (full standings here). And Purdue and Northwestern could become bowl eligible. Following is a look at this Saturday?s menu of games, so be sure to track them from kickoff to the final whistle.

WHY YOU SHOULD WATCH: The Badgers? Leaders Division title hopes looked bleak after they lost two heartbreakers in a row in October. But Wisconsin now controls its destiny. That's amazing. Win out and the Badgers advance to the Big Ten title game. The Fighting Illini streaked to a 6-0 start but have stumbled since, losing four in a row. A win would restore faith in slumping Illinois.

KEY MATCHUP: Wisconsin RB Montee Ball vs. the Illinois front seven. Ball is hot, setting the Big Ten single-season record for touchdowns with 27 after scoring three at Minnesota last week. And he has two games to play. While the Illinois offense has sputtered of late, the defense has been more consistent. Can LB Jonathan Brown, T Akeem Spence, Whitney Mercilus, who leads the country in sacks and fumbles forced, slow down Ball and the deadly Wisconsin offense?

NUMBER?S GAME: 87, the percent of times the Badgers score in the red zone, which is the highest figure in the nation.

KEY NOTE: The Fighting Illini have failed to score in the first half of each of the last four games. Last week was especially bad, as Illinois was out gained 249-30 in the first half in a home loss to Michigan.

WHY YOU SHOULD WATCH: The Nittany Lions also control their destiny in the Leaders Division-win out, and Penn State is in the Big Ten title game. In fact, the Nittany Lions could clinch the division this Saturday with a win and loss by Wisconsin. But what will the mind-set be of the Nittany Lions, who continue to deal with fallout from revelations of a child sex abuse scandal that cost Joe Paterno his job? The Buckeyes? division hopes took a severe hit with a 26-23 overtime loss at Purdue.

KEEP AN EYE ON: Ohio State WR DeVier Posey. He?s back! Finally. Posey was suspended for the first five games for his part in the memorabilia scandal and then got an additional five-game suspension for taking excessive pay for a summer job. He?s a big-play maker on the edge that this offense has been missing.

NUMBER?S GAME: 0, points scored by Penn State in the first half of each of its past two games.

KEY NOTE: Penn State, playing its first game without Paterno on the staff since 1949, had a seven-game winning streak broken last week.

WHY YOU SHOULD WATCH: With two more victories, the Spartans will wrap up the Legends Division and advance to the Big Ten title game. If the Spartans beat Indiana-and Michigan topples Nebraska-the Spartans would clinch the division this weekend. The Hoosiers already are eliminated from bowl contention but are playing for pride as they build under first-year coach Kevin Wilson.

KEEP AN EYE ON: The Spartans? focus. Michigan State is coming off a big 37-21 win at Iowa, spending a lot of energy and emotion to pay back the Hawkeyes for an embarrassing defeat last year. Now isn?t the time for the Spartans to relax with the struggling Hoosiers, who have lost seven in a row, coming to East Lansing. Indiana, which was off last week, is playing some its best ball of the season.

KEY MATCHUP: Michigan State front seven vs. Indiana QB Tre Roberson. The Spartans have the top defense in the Big Ten, headed by a strong line (OT Jerel Worthy) and active group of linebackers (Denicos Allen). Roberson has been a revelation since taking over at quarterback. The true freshman is a force as a runner and an emerging passer. He could pose fits for the Spartans.

NUMBER?S GAME: Michigan State QB Kirk Cousins is four touchdown passes behind Jeff Smoker for the all-time Spartan lead. Cousins and Smoker are the lone quarterbacks in school annals to pass for over 8,000 career yards.

WHY YOU SHOULD WATCH: The Boilermakers are riding high following a 26-23 overtime victory at home over Ohio State. Now, Purdue needs just one more triumph to become bowl eligible for the first time since 2007. Iowa already is bowl eligible, but it needs to regroup after a 37-21 home loss to Michigan State knocked it out of serious contention in the Legends Division.

KEEP AN EYE ON: Purdue?s quarterback play. Caleb TerBush started and played well last week against Ohio State. But he gave way late to Robert Marve, who proceeded to lead the Boilermakers to a huge victory. Coach Danny Hope has said that TerBush will continue to start, but Marve will play. Whoever is under center will need to pass well to keep a struggling Hawkeye defense off balance.

KEY MATCHUP: Purdue defensive line vs. Iowa RB Marcus Coker. Led by T Kawann Short, the defensive front is the strength of the Boilermaker defense. But it will be challenged to slow down Coker, who is No. 2 in the Big Ten in rushing with 1,158 yards (115.8 ypg). He had just 57 yards rushing last week, but he?s still a tough, physical runner who can wear down a defense.

KEY NOTE: After allowing an aggregate 703 yards rushing in consecutive road losses to Michigan and Wisconsin, the Boilermakers held Ohio State to 163.

WHY YOU SHOULD WATCH: Both teams are still in the hunt in the Legends Division but will need help. This game is all about staying in contention. The Huskers are in better shape, as they hold the tiebreaker over division-leading Michigan State because of their head-to-head victory over the Spartans earlier this season.

KEEP AN EYE ON: Rushing attacks. It?s no secret. Both of these teams want to run the ball. Which one can impose its will on the other? The Wolverines rank second in the Big Ten in rushing (235.9 ypg), while the Cornhuskers rank third (232.7 ypg). Nebraska will look to Rex Burkhead to get rolling, while Michigan needs Fitzgerald Toussaint to heat up.

KEY MATCHUP: Michigan?s Denard Robinson vs. Nebraska?s Taylor Martinez. In many ways, each is a mirror of the other. Both are excellent runners who are capable of scoring anytime they take off running. Passing? Each remains a work in progress. And while each is dynamic, each also can be prone to trying to do too much and committing mistakes. Keep an eye on Robinson, who sprained his right wrist last week but still is expected to play.

NUMBER?S GAME: 15.5, points allowed per game by Michigan, which ranks second in the Big Ten and fifth in the nation. Last year, the Wolverines allowed 35.2 points per game.

KEY NOTE: This will be the first regular-season meeting between the schools since 1962, when Nebraska won at Michigan, 25-13, in Bob Devaney?s first season as head coach. The two most recent meetings have come in bowls,
with Michigan winning the 1986 Fiesta Bowl and the Cornhuskers taking a 32-28 decision in the 2005 Alamo Bowl.

WHY YOU SHOULD WATCH: The Wildcats are the hottest team in the Big Ten, having won three in a row. Earlier this season, Northwestern lost five in a row. Now-coming off a 28-6 win over Rice-it just needs one more win to become bowl eligible. With eight losses, Minnesota already is eliminated from bowl contention, but the Gophers are playing some of their best football of the year with the season drawing to an end.

KEEP AN EYE ON: Is Minnesota QB MarQueis Gray healthy? He played with a back injury last week and he struggled, hitting only 6-of-14 passes for 51 yards with a pick. He also ran 19 times for 68 yards. Gray was rolling the last few weeks prior to the Wisconsin game.

KEY MATCHUP: Minnesota?s offensive line vs. Northwestern?s defensive line. If the Gophers can?t run well, they will have no chance to pull the upset against a Northwestern attack that averages 30.9 points. The Minnesota front was dominated last week vs. Wisconsin, as the Gophers totaled just 156 yards and failed to score an offensive touchdown in a 42-13 loss.

NUMBER?S GAME: The Northwestern offense is rolling. Since QB Dan Persa returned from injury in the Illinois game, the Cats pace the Big Ten in passing (261.0 ypg) and are second in total offense (458.7 ypg). WR Jeremy Ebert is rolling with 355 yards receiving in the last two games.

KEY NOTE: A victory will make Northwestern bowl eligible for a school-record fifth season in a row.