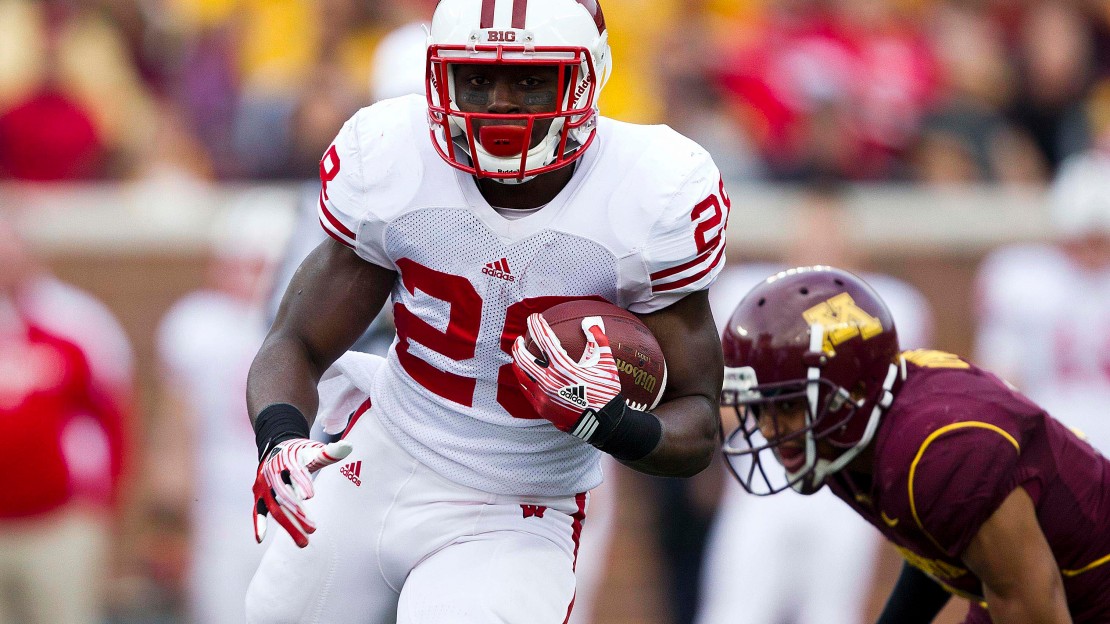 By the time Montee Ball leaves Wisconsin, he may have a place alongside a growing list of great Badger running backs. Ball already has etched his name in the Big Ten record books. Last week, he scored three touchdowns to push his 2011 total to 27, a Big Ten single-season record. He has 23 rushing touchdowns and four via the air. Ball also has thrown a touchdown pass.

More vital to Ball: He has his Badgers in the thick of the Leaders Division race. Win out, and Wisconsin will play in the inaugural Big Ten championship game on Dec. 3 in Indianapolis. Ball has been a centerpiece for one of the nation?s most dynamic and explosive attacks in the nation. The 5-11, 210-pound junior paces the Big Ten and ranks fifth in the country in rushing, ambling 185 times for 1,242 yards (124.2 ypg). He has six 100-yard rushing games this season, including a 200-yard effort.

Ball and the Badgers, who rank fourth in the nation in scoring (46.5 ppg), play at Illinois before finishing the season at home vs. Penn State in what could be a de facto Leaders Division championship.

I spoke to Ball about a number of topics as he prepared to face a Fighting Illini team that has lost four in a row.

Q: How did it feel to break the Big Ten single-season record for touchdowns last week at Minnesota?
A: It felt great. As soon as I crossed the goal line, I was overwhelmed with a bunch of feelings. It?s a huge accomplishment for the entire offense. And I am proud of myself for rising to the challenge I had in the offseason, and I appreciate the support I have had.

Q: After running for 996 yards and 18 touchdowns in 2010, did you anticipate having this type of season back in the summer?
A: If you had told me then how many touchdowns I would have now, I probably wouldn?t have believed it. As an offense, I did see us playing this well, given how hard we work and how focused we are. I felt that I would have success, but not at this level and I?m really glad to see us all do well each week and each day. It?s a great feeling.

Q: What has quarterback Russell Wilson meant to the offense?
A: What he brought to the team was leadership, confidence. That?s the one thing that really stands out, is how confident he is in the pocket. He?s also very calm, and that?s what we need in that position when things aren?t going smoothly. He?s able to clam down the entire offense. And that allows to do what we do best.

Q: What are some things opponents have said to you after games?
A: Players from Northwestern and Michigan State told me to keep doing what I?m doing, running hard, just stuff like that. I really like to hear those things. It?s a good feeling and keeps me motivated.

Q: How would you describe your style?
A: I?m a powerful runner who can make a few moves here and there. But I?m mostly a downhill runner, one cut and go. I just get stronger and stronger as the game goes on.

Q: When you lost back-to-back tough games in October on last-minute plays, did you lose hope and think your chance of winning the Leaders Division was over?
A: After losing the second game (at Ohio State), I?ll be honest with you. I felt like we let our own destiny slip out of our hands. It stung a bit after that. But we made sure as a team that we stayed focused and got back on track. Good thing we did, because we are back in the driver?s seat, which is a great feeling. We control our destiny.

Q: What is your favorite play?
A: It?s one of our zone plays to the right. We call it "Fire Zulu." I love running that play.

Q: Describe your relationship with your fellow running backs.

A: James White is one of my closest friends on and off the field. Last year when he took my spot, he got me into focusing on working harder and trying to become a better player. I think that drew us closer together because we have a healthy competition. If I get a long run, he wants to get in and have a long run and vise versa. That competition really draws us together.

Q: The Badgers have a great legacy of running backs, producing the likes of Ron Dayne, Brent Moss, Anthony Davis, Michael Bennett and P.J. Hill in recent years. Have you talked to any of the past greats to get advice?

A: Brian Calhoun. He?s the main one. He has taught me some stuff here and there, how to make some cuts, things to improve on, what I need to keep doing. It?s great seeing them on campus from time to time. But Brian has been good to me.