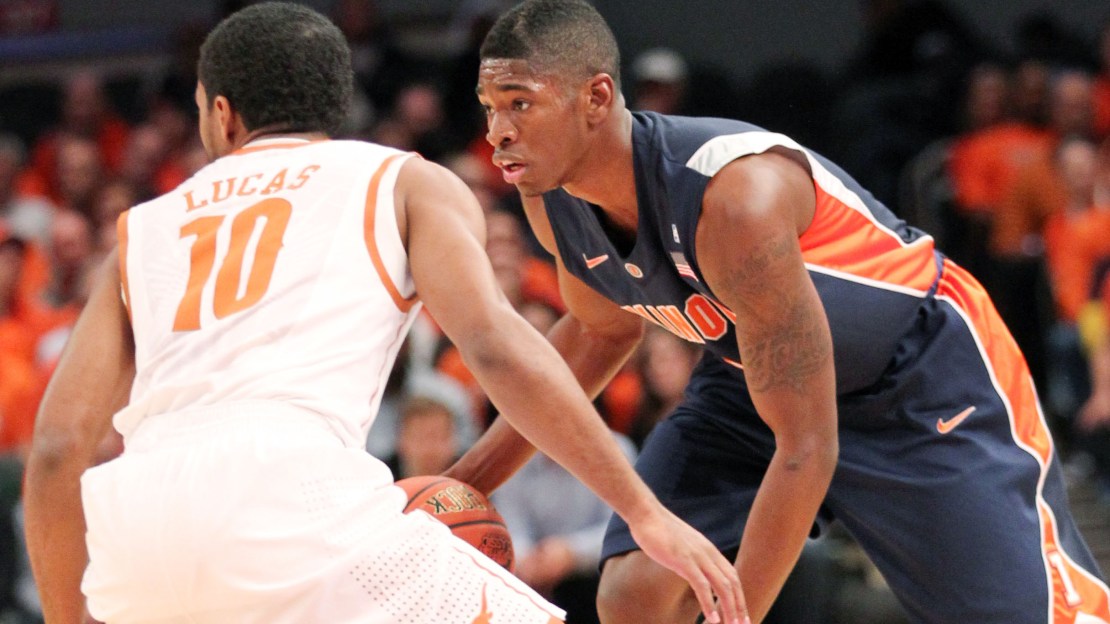 We continue to work our way up our projected standings, and today we've reached our pick for fifth place: the Illinois Fighting Illini. Bruce Weber's squad may be the biggest wild card in this season's Big Ten, as it is supremely talented but woefully inexperienced.  What's a reasonable range of expectations for a team like this? Let's find out. Picture a major conference college basketball team with plenty of tradition. Said squad enters a season with lots of experienced players and high expectations, evidenced by a preseason ranking in the low teens. As the season gets going, however, things just never quite click, and by February our protagonists have fallen out of the Top 25 altogether. After a second-round loss in March, fans of said program are left scratching their heads and wondering what happened to a once promising season.

Fast forward to the fall. The roster looks drastically different, as over half the minutes from the preceding season must be replaced. A promising recruiting class is on campus, but it doesn?t look like an instant impact type of group–there?s talented 4-star recruits, but no coveted 5-stars. What could the season hold for a team like this?

If you said ?National Championship,? you?re somehow not crazy. Wait, come back! Let me explain. The preceding two paragraphs described not just the current situation at Illinois, but also the state of the Connecticut basketball program headed into last season, with one major difference: UConn was coming off a second-round NIT loss opposed to Illinois' NCAA loss. Only two proven commodities remained in Storrs: reasonably efficient PG Kemba Walker and rebounder/shotblocker Alex Oriakhi. The incoming recruiting class included three top 100 recruits, but none in the RSCI top 25: Roscoe Smith (#28), Shabazz Napier (#75), and Jeremy Lamb (#78).

Walker exploded from a solid Big East player into an NBA lottery pick, and the incoming freshmen exceeded all reasonable expectations. Then, just to blow our minds, the team saved its best basketball for the biggest stage and won the whole enchilada.

Beyond the back story, Connecticut?s disappointing NIT team also had one other strong parallel with last season?s Illinois team: bad luck. That term–luck–brings up all kinds of heated debates amongst reasonable college basketball fans, so let?s just call it something else: close game performance. In 2009-10, that Connecticut NIT squad went 1-6 in games decided by one possession; similarly, Demetri McCamey and company went 1-5 in such games last season. Whether those dismal marks were due to some inherent flaw in personnel/coaching or just dumb luck is beside the point–both teams saw close game performance ruin their season. Connecticut bounced back to go 10-4 in one possession games in 2010-11, including five such wins in the Big East and NCAA tournaments. If Illinois can somehow conjure up similar close game performance, or even just bring it back closer to .500 territory, Bruce Weber?s seat should cool considerably.

Let?s back up here for a minute. None of this is to say that a National Championship is a reasonable prediction for Illinois. Connecticut?s combined Big East/NCAA Tournament run was unprecedented, and we?re not likely to see another like it for a long time. It is more reasonable, however, for Illinois fans to hope for a regular season similar to that of the 2010-11 Huskies. Namely, a surprising run into the Top 25 and a top five seed in the NCAA Tournament. That feels like a reasonable ceiling for this Illinois roster.

The most obvious response to this comparion is ?Illinois doesn?t have a Kemba Walker. It's KEMBA WALKER!? But, before last season, there was no indication that Connecticut had a KEMBA WALKER either, at least not in the sense that we think of him today. Take a look at this comparison of the sophomore seasons of Kemba Walker and Illinois? Brandon Paul:

Isn?t that a heck of a lot closer than you thought it would be? Walker played more minutes, but the rate stats were strikingly similar. Kemba had the superior assist numbers while Paul shot a little better. They had similar usage rates and efficiencies. By no means is this enough to project Brandon Paul as an All-American, but he's not too far behind where Walker was at the same stage. He has potential.

And I think that?s all we?re really getting at here–Illinois has potential. The roster boasts eight players that finished high school ranked in the RSCI top 100–that's the most such players in the Big Ten. D.J. Richardson was the BTG Freshman of the Year two seasons ago. Meyers Leonard makes NBA scouts drool with his length and athleticism. Sam Maniscalco, the fifth-year transfer from Bradley, was a darkhorse candidate for last year's Missouri Valley POY before an injury shut down his season. The pieces are here to form a good to very good team.

But let's talk downside. It's not unprecedented for a team this talented to miss the NCAA Tournament. In fact, we need only go back five seasons to find such a case in the Big Ten. The 2006-07 Michigan Wolverines, led by seniors Dion Harris and Courtney Sims, had eight RSCI top 100 players on the roster, just like these Illini. That squad wasn't terrible–they went 8-8 in conference play and 22-13 overall–but their failure to make the NCAA Tournament led to Tommy Amaker's firing and the introduction of Beilein Ball to Ann Arbor. Such a scenario unfolding in Champaign isn't hard to envision either.

All told, Illinois has as wide a range of plausible outcomes as any team in the conference. If it all comes together, this team could finish as high as second, but a stumble into the bottom three shouldn't be discounted either. We Geeks are mildly bullish on these Illini, projecting an upper half finish, but there's an awful lot of variance in that projection. Early returns show Illinois as very much a work-in-progress, as they've defended well but struggled offensively against two cupcakes. If the offense can get rolling, this could be a very dangerous team at the end of the season. If it can't, this team could be dangerous to Illini fans' health.