Catch up on Monday's Hoops Action 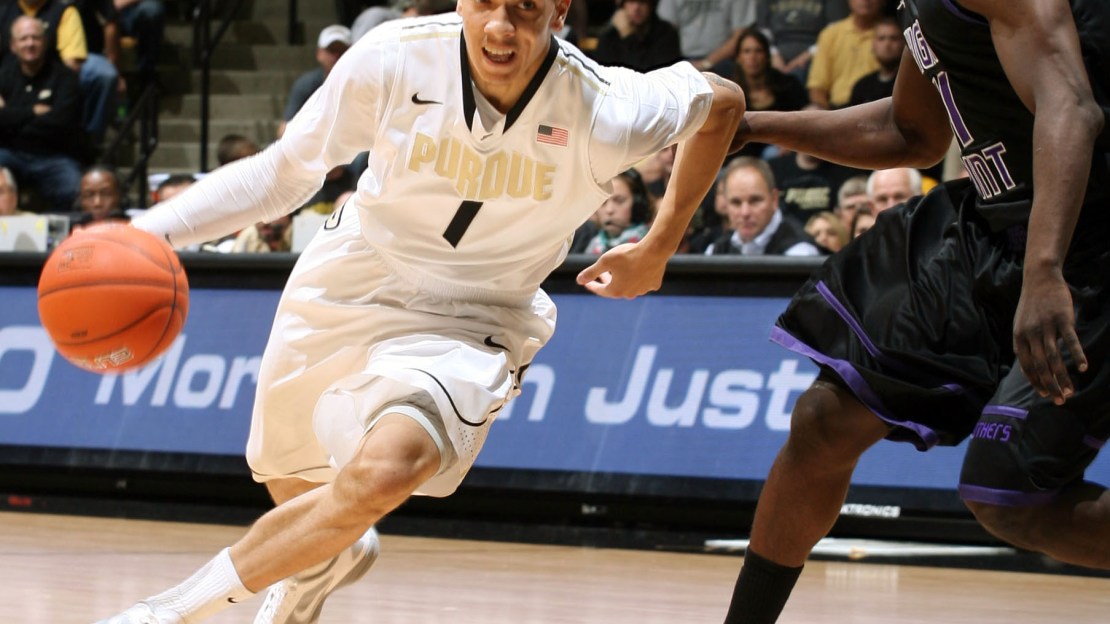 It was a busy night of Big Ten men's hoops Monday. There were seven games, including Purdue barely topping High Point on BTN, and the Big Ten won all of them. Use our Big Ten scoreboard to catch up on all of the action and stats and watch all of the video highlights and analysis. Also, check out our feature on the renovations at Mackey Arena and watch our highlights from Purdue's close scare now.

FINAL: Tim Frazier paced Penn State with 20 points to lead the Nittany Lions to a 62-46 victory over Radford on Monday at Bryce Jordan Center in University Park. After going into the break with momentum, the Nittany Lions kept their foot on the gas to start the second half. Penn State was winning 21-17 late in the first half before it went on a 19-6 run to extend its lead to 17 points with 17:34 remaining in the game. Jareal Smith contributed 16 points for the Highlanders in a losing effort. Radford had trouble finding its shooting touch, shooting just 34 percent (16-of-47) from the field.

HALFTIME: Tim Frazier has 12 points to lead Penn State to a 29-20 lead over Radford at the end of the first half. Both teams have been able to control their opposition's leading scorer. Neither the Nittany Lions' Trey Lewis nor the Highlanders' Johnathan Edwards have been able to get going. Lewis has five points and Edwards has scored zero. Penn State has generated more of its offensive production from inside the three-point line by making 10-of-18 two-point field goals and hitting 1-of-9 from beyond the arc. Jareal Smith has played well thus far for Radford with 11 points.

FINAL: Ryne Smith scored 26 points to lift Purdue to a 67-65 win over High Point on Monday at Mackey Arena in West Lafayette. The Boilermakers were trailing when Robbie Hummel converted a field goal with 2:08 to go to give they a lead they would not relinquish. Both Smith and Hummel played well for Purdue. Smith went 9-of-16 from the field and shot 8-of-15 from long range. Hummel had 18 points. The game was back and forth as the two teams traded the lead 10 times. The Boilermakers were effective from three-point range during the game, making 13 and shooting 41 percent. To go with Smith's efforts and Hummel's contribution, Anthony Johnson contributed 13 points. Nick Barbour tallied 17 points for the Panthers in the loss. Jairus Simms had a quality shooting game, nailing 5-of-7 shots from the field and scored 10 points. High Point was on fire from beyond the arc during the game, hitting seven threes and shooting 39 percent from long distance. Besides Barbour's production and Simms' stellar play, Shay Shine added 14 points. Purdue outshot the Panthers 46 percent (24-of-52) to 44 percent (23-of-52).

HALFTIME: Purdue's Robbie Hummel and High Point's Shay Shine have both been held in check during the first half, but the Boilermakers lead 29-25 at the half. Hummel, the leading scorer this season for Purdue, has not made much of an impact through the first 20 minutes. He enters halftime with five points. The Panthers' leading scorer, Shine, has been shut down thus far. He enters halftime with zero points. Ryne Smith has been the best player on the court for the Boilermakers thus far with nine points. Nick Barbour played well in the first half for High Point with 10 points.

FINAL: Matt Gatens scored 27 points to lift Iowa to a 95-79 win over North Carolina A&T on Monday at Carver-Hawkeye Arena in Iowa City. The Hawkeyes got solid performances from both Gatens and Eric May. Gatens made 9-of-15 shots from the floor. May contributed 20 points and went 8-of-12 from the field. Iowa hit 48 percent of its field goals (33-of-69). A run lasting across the halftime break allowed the Hawkeyes to grab the advantage. Iowa led 45-30 late in the first half before it widened the margin to 26 points with a 15-4 run that ended early in the second half. Zach McCabe was 4-of-5 from the floor and chipped in 12 points for the Hawkeyes. Along with Gatens' performance, May's contribution, and McCabe's contribution, Melsahn Basabe scored 15 points and Bryce Cartwright scored 12 points. Marc Hill had 20 points and shot 7-of-11 from the field for the Aggies in the loss. North Carolina A&T had trouble finding its shooting touch, shooting just 37 percent (26-of-71) from the field. In addition to Hill's efforts, Nic Simpson registered 12 points. Iowa never trailed. The Hawkeyes' largest lead was 27, which came with 14:16 remaining in the game.

HALFTIME: Matt Gatens scored 15 points for Iowa in the first half to carry it to a 50-34 lead over North Carolina A&T. Gatens and Eric May have both played well for the Hawkeyes. May scored 11 points and shot 4-of-6 from the field. Iowa never trailed in the first half and led by as many as 19 points. Leading 9-6, the Hawkeyes went on a 9-0 run to open up a 18-6 advantage. Aaron White, the leading scorer this season for Iowa, has not made much of an impact through the first 20 minutes. With zero points, he will need a strong second half to get to his usual level of production. Marc Hill played well in the first half for the Aggies with eight points.

FINAL: Minnesota and South Dakota State traded momentum throughout, but the Golden Gophers defeated the Jackrabbits 71-55 on Monday at Williams Arena in Minneapolis. There were nine lead changes in the game. Even in defeat, Nate Wolters came through for the Jackrabbits with 20 points. Trevor Mbakwe sparked the Golden Gophers as he scored 15 points and shot 5-of-6 from the field in the victory. Minnesota shot 59 percent from the field (27-of-46). In addition to Mbakwe's performance, Ralph Sampson III recorded 10 points and Maverick Ahanmisi racked up 10 points. Chad White shot 3-of-5 from the field and scored 11 points for South Dakota State. The Jackrabbits shot just 37 percent from the field (19-of-51). Along with Wolters' work and White's stellar play, Taevaunn Prince registered 13 points.

HALFTIME: It is still anyone's game as Minnesota and South Dakota State have passed the lead to each other seven times already in the first half. At the moment the Golden Gophers are on top 32-30. The situation might've been even worse for the Jackrabbits, as Minnesota led by as many as seven points early in the game. Trevor Mbakwe, the leading scorer this season for the Golden Gophers, has not made much of an impact through the first 20 minutes. He enters halftime with four points. Chip Armelin will have to be careful, as he already has three fouls and he's been the best player on the court for Minnesota thus far. In the first 20 minutes, the Golden Gophers' Armelin scored nine points and shot 4-of-5 from the field. Nate Wolters played well in the first half for South Dakota State with 10 points.

FINAL: D.J. Richardson paced Illinois with 20 points to lead the Fighting Illini to a 66-46 victory over SIU Edwardsville on Monday at Assembly Hall in Champaign. The Fighting Illini attempted 24 free throws and made 17. Besides Richardson's work, Tyler Griffey added 10 points. Mark Yelovich scored 13 points for the Cougars in the game. SIU Edwardsville shot just 30 percent from the field (17-of-57). In addition to Yelovich's efforts, Corey Wickware tallied 12 points. Illinois never trailed.

HALFTIME: Illinois went on a 9-2 run to close the first half on a high note and leads SIU Edwardsville 36-23. An aggressive offense and the ability to get to the charity stripe allowed the Fighting Illini to take a halftime lead. Through 20 minutes of play, Illinois has attempted 14 free throws. The Fighting Illini led from the start and led by as many as 13 points. Leading 29-23, Illinois went on a 7-0 run to open up a 36-23 advantage. The Fighting Illini have been able to make the most of their good looks from long range, hitting at a 45 percent clip (5-of-11). Illinois' leading scorer, Meyers Leonard, has been shut down thus far. He enters halftime with two points. The Cougars fired often and fired with accuracy from distance, hitting 44 percent (4-of-9) of their three-point attempts. D.J. Richardson has been the best player on the court for the Fighting Illini thus far with 13 points. Mark Yelovich played well in the first half for SIU Edwardsville with eight points.

FINAL: Michigan started off its game against Towson with an early 25-4 run and never looked back on the way to a 64-47 victory on Monday at Crisler Arena in Ann Arbor. Evan Smotrycz knocked down a field goal that capped off the run by the Wolverines and helped Michigan lead 37-16 at the half. Robert Nwankwo was a bright spot for the Tigers in the loss with 16 points, seven rebounds, and 7-of-13 shooting from the field. Trey Burke sparked the Wolverines as he scored 13 points and knocked down 5-of-8 shot attempts in the win. To go with Burke's efforts, Tim Hardaway Jr. scored 15 points and Smotrycz chipped in 13 points. Deon Jones had a quality shooting game, nailing 5-of-10 shots from the field and scored 12 points. It was a team effort for Towson as it had 11 assists on 18 baskets. To go along with Nwankwo's efforts and Jones' stellar play, Marcus Damas scored 11 points. Michigan never trailed. The Wolverines' largest lead was 27, which came with 6:45 remaining.

HALFTIME: Michigan has jumped out to a large 37-16 lead over Towson at the half. The Wolverines didn't trail once in the first half and they also led by as many as 23 points. Michigan displayed crisp passing in the first half, totaling nine assists on 15 field goals. The Tigers showed their ability to pass the ball well with six assists on seven field goals. Trey Burke has been the best player on the court for the Wolverines thus far with nine points. Robert Nwankwo played well in the first half for Towson with nine points and four rebounds.

FINAL: Thanks to 20 points from Bo Spencer, Nebraska defeated USC 64-61 in overtime on Saturday. Spencer shot 6-14 from the field and 5-7 from the free throw line. In addition to Spencer's efforts, Brandon Richardson scored 12 points and Jorge Brian Diaz added 10 points. The Cornhuskers shot 50% from three-point range (9-18) in the game. The Trojans struggled from the field, shooting 36% (21-59). Maurice Jones led USC with 18 points. Aaron Fuller added 13 points on 4-8 shooting and Alexis Moore scored 11.