Coach K Gets Record in Win over Spartans 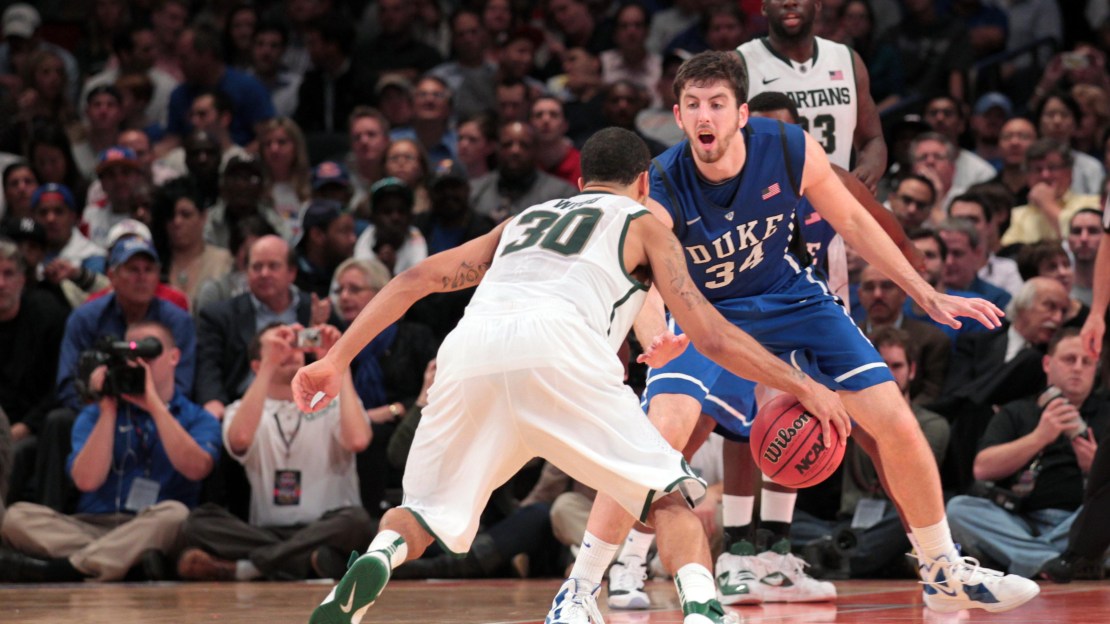 (AP) Mike Krzyzewski became Division I's all-time winningest coach when No. 6 Duke beat Michigan State 74-69 on Tuesday night in the State Farm Champions Classic. The Blue Devils (3-0) gave Coach K his 903rd win, breaking the tie with Bob Knight, Krzyzewski's college coach at Army and his mentor throughout his professional career. Junior guard Andre Dawkins had 26 points for Duke, which took control with a 20-1 run that gave the Blue Devils a 61-41 lead with 9:17 left. Keith Appling led the Spartans with 22 points, while Draymond Green added 10 and eight rebounds. Read the full AP recap, see the box score and the play-by-play, plus check out the Geeks Michigan State Season Preview.

FINAL: Seth Curry scored 20 points and grabbed five rebounds and Ryan Kelly added 14 points and five boards as they teamed up to lead Duke to a 74-69 victory over Michigan State on Tuesday at Madison Square Garden in New York. The Blue Devils received a spark from Curry, who contributed 4-of-7 shooting from the field. Duke nearly blew the 20-point lead that Curry gave them on a free throw midway through the second half. The Blue Devils seized control of the contest after the break. Duke trailed 35-34 with 19:25 remaining in the game, but a 27-6 run allowed it to take a 20-point lead in the middle of the second half. The Blue Devils were hot from long range, hitting 10 threes and shooting 50 percent from beyond the arc. Duke attempted 41 free throws and made 30. Along with Curry's performance and Kelly's contribution, Andre Dawkins scored 26 points. Keith Appling scored 22 points and went 8-of-10 from the field for the Spartans in the loss. To go along with Appling's efforts, Brandon Wood scored 15 points and Draymond Green recorded 10 points.

HALFTIME: Andre Dawkins has 14 points to lead Duke to a 34-33 lead over Michigan State at the end of the first half Important players on both sides have been corralled thus far. The Blue Devils' Austin Rivers and the Spartans' Draymond Green have both been held in check during the first half. Rivers has three points and Green has scored five. Neither team has been able to take control of the game as the lead changed hands five times. Duke has the lead at halftime due in large part to its ability to get to the free throw line. The Blue Devils attempted 13 free throws in the first 20 minutes. Duke has been able to make the most of its good looks from long range, hitting at a 55 percent clip (6-of-11). The Blue Devils passed the ball well with six assists on nine field goals in the first half. Brandon Wood played well in the first half for Michigan State with eight points.