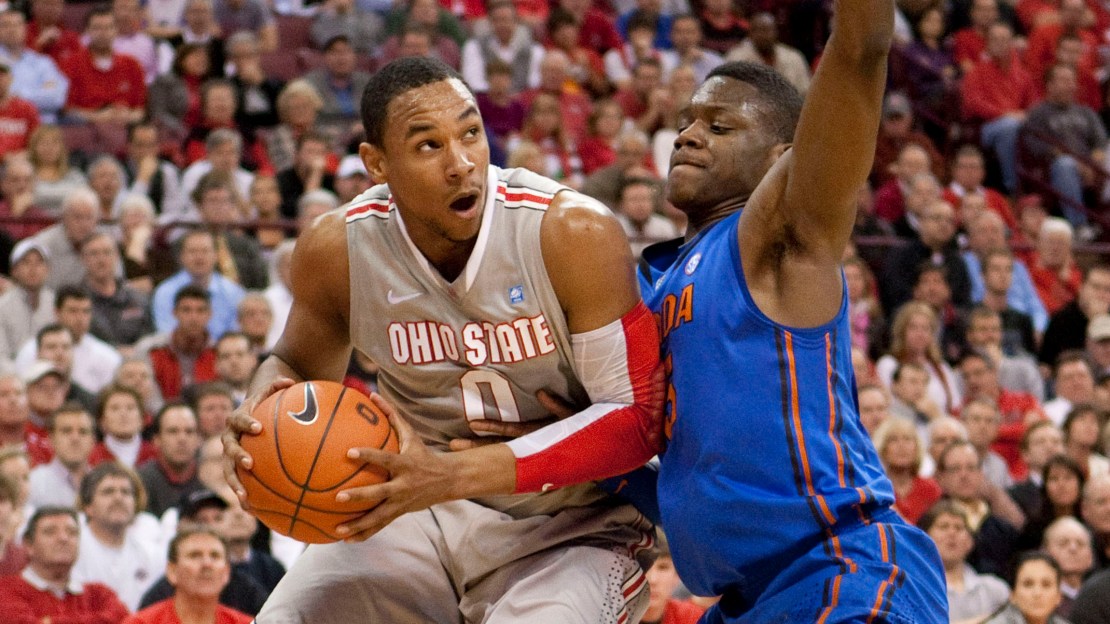 (AP) William Buford scored 21 points and No. 3 Ohio State weathered Florida's fast start to beat the seventh-ranked Gators 81-74 on Tuesday night. Jared Sullinger added 16 points, Deshaun Thomas had 15 and Aaron Craft 13 points and seven assists for the Buckeyes (2-0), who forced 16 turnovers and hit 27 of 34 free throws. Down as much as 16 points, Florida got as close as five with under a minute left before Buford sealed it with two foul shots. Ohio State has won eight of the 12 meetings, but the Gators captured the big one, winning the 2007 national title game. Read the full AP recap and see the box score.

Check out our half-by-half recap, powered by Narrative Science:

FINAL: Jared Sullinger scored 16 points and grabbed six rebounds and William Buford added 21 points and six boards as they teamed up to lead Ohio State to an 81-74 victory over Florida on Tuesday at Value City Arena in Columbus. The Buckeyes hit 47 percent of their field goals (25-of-53). Ohio State shot 79 percent from the charity stripe and made 27 free throws. After going into the break with momentum, the Buckeyes kept their foot on the gas to start the second half. Down 27-22 in the first half, Ohio State broke out for an 18-5 run to take an eight-point lead early in the second half. To go with Buford's efforts and Sullinger's contribution, Deshaun Thomas scored 15 points and Aaron Craft totaled 13 points. Patric Young had 14 points and grabbed 12 rebounds for the Gators in a losing effort. Erik Murphy was 5-of-6 from the floor and chipped in 14 points for Florida. The Gators were effective from three-point range during the game, making 11 and shooting 52 percent. Besides Young's work and Murphy's stellar play, Brad Beal scored 17 points and Kenny Boynton racked up 15 points. Florida pounded the boards hard in defeat as it grabbed 34 to 25 for the Buckeyes.

HALFTIME: Florida led Ohio State late in the first half, but allowed the Buckeyes to use a 13-5 run to take a 35-32 lead into halftime. The Gators' leading scorer, Mike Rosario, has been shut down thus far. With five points, he will need a strong second half to get to his usual level of production. Florida has been more effective from beyond the arc than the inside and might want to attempt more three-point shots in the second half after shooting 55 percent (6-of-11) from three-point range in the first half. Jared Sullinger has been the best player on the court for the Buckeyes thus far with 10 points. Erik Murphy played well in the first half for the Gators with nine points.