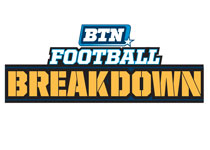 On tonight's Big Ten Breakdown with Howard Griffith and Chris Martin at 7 p.m. ET, Mike Hall joins our analysts to look back at the previous weekend and discuss how it impacts the upcoming Big Ten football picture. Find out what else our guys will be talking about on tonight's show in this post, plus send in your nominations for "Howard's Hero" and Chris Martin's "On the Corner."

Each week Griffith and Chris Martin select their stars from the past weekend of football. Martin's choice is named "On the Corner" while Griffith's chooses one "Howard's Hero." Now it's time for you to nominate your own Big Ten player of the week, and be sure to back up your nomination with Big Ten stats. Griffith and Martin will review the nominees and then reveal their own choices on the show. If you state your case eloquently enough, it might make the TV show. You can also tweet your choices to Griffith (@HowardGriffith on Twitter) and Martin (@BTN_cmart16 on Twitter), too.