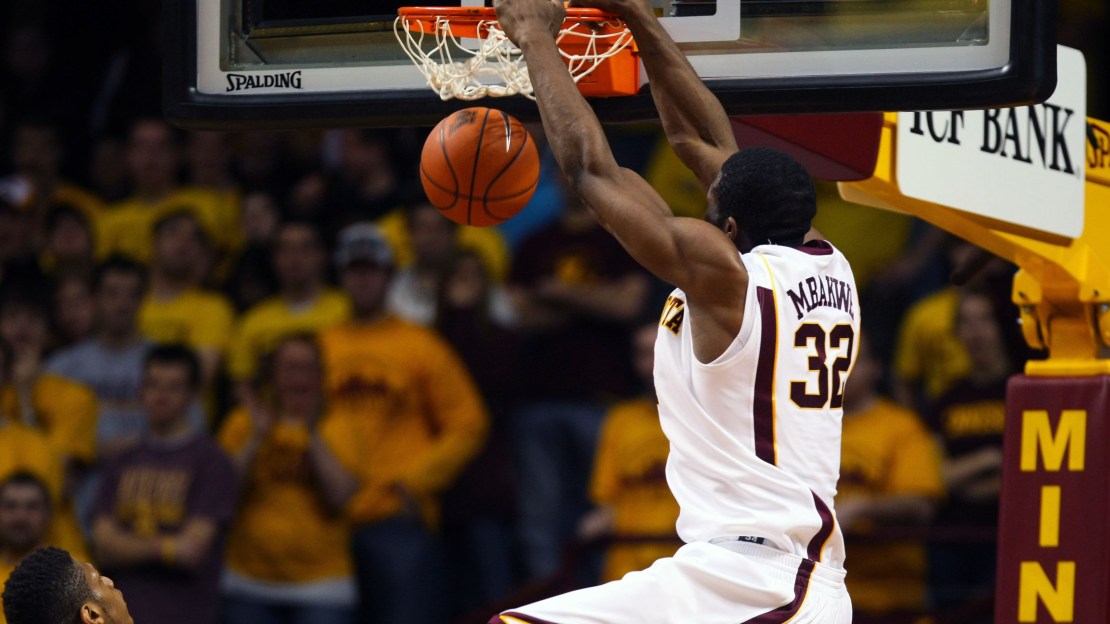 In Big Ten play, Minnesota was better than Michigan State last season.  Seriously.  And the season started out so well.  Through 20 games, the Gophers had 16 wins, including victories over UNC, West Virginia, Michigan, and Purdue.  But in January, Minnesota lost Al Nolen and Devoe Joseph, and the backcourt play crumbled.  It?s a remarkable feat to finish dead last in the Big Ten in three-point percentage even while carrying Blake Hoffarber on the roster.  With defenses focusing on guarding The Hoff, and no other outside threats to speak of, Minnesota finished the year on a 1-10 skid.

But there?s good news for the upcoming campaign.  For one, the Gophers return two-thirds of the minutes from last year?s team, which is well above the norm for the Big Ten this season.  Many of those minutes were played by freshmen guards, who will improve the team significantly with better perimeter play.  Further, Minnesota will feature the conference?s best defensive player in Trevor Mbakwe.

But even with all that good news, I can?t help but think ?so what??  Yes, Minnesota returns a lot of minutes, but the minutes they lose (most notably, Blake Hoffarber, Al Nolen, and Devoe Joseph) were valuable backcourt players.  Nolen for his defense, Hoffarber and Joseph for their offense.  The Gophers were terrible from three-point range last season–how much better can they be after losing their two best shooters? The following table lists the three-point accuracy of the returning Gophers, from most attempts to fewest.

Even if the young guards make great strides forward, it?s hard to see them doing more than simply replacing Hoffarber (38.9%) and Joseph?s (38.1%) accuracy. Frankly, that represents a best-case scenario.

As for the defense, it?s true that Tubby Smith will have the best defensive player in the conference at his disposal this season.  But it?s also true that?s been the case for the past four seasons.  Before Mbakwe, it was Damian Johnson.  Yet Minnesota?s defense has just been average over that span.  The consistent weakness with Smith?s crew is defensive rebounding.  Mbakwe, of course, crashes the glass better than anyone in the Big Ten.  But he doesn?t get a lot of help.  Moreover, the transfer of Colton Iverson to Colorado State isn?t going to make rebounding any better. The problem here might be more on the coach than the players anyway.  Since he entered the Big Ten, Smith has tried to bring his brand of SEC-style pressing to Minnesota, while the rest of the conference has continued to focus on rebounding.  The pressure has not led to an explosion in turnovers, and the Gophers are consistently punished on the glass.  With Smith?s best disruptor in Nolen gone, now might be an ideal time to transition to Big Ten ball.

In sum, Minnesota brings back a lot from last year, but this is a team with severe weaknesses.  The offense will likely revolve around slashing from the Gophers? athletic wings, free throw line jumpshots from Ralph Sampson III, and putbacks from Mbakwe.  But I anticipate that opponents will sag in the paint until Minnesota proves it can make outside shots.  On defense, Mbakwe will be a monster, but a monster without much help.  It will take a breakout performance (or two) to move this team from the middle of the Big Ten standings.