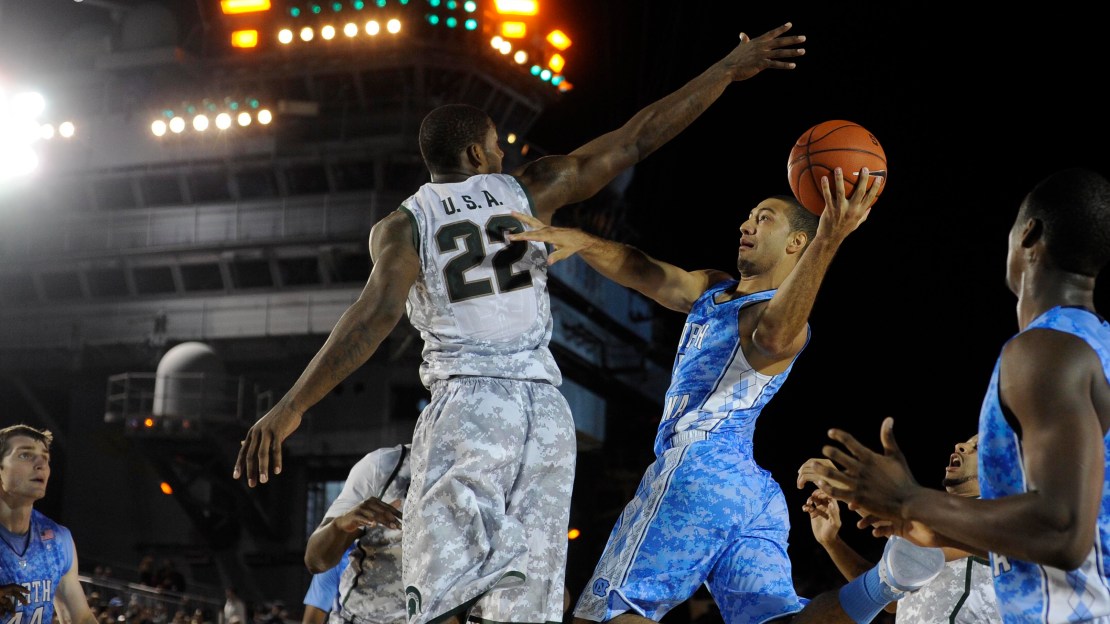 In case you didn't hear, Michigan State played North Carolina on a boat on Friday. Despite that fact, the Spartans couldn't throw it in the ocean. It doesn't matter if you thoroughly dominate UNC on the boards if there's a lid on the basket. Tom Izzo's team shot just 38 percent inside the arc and a rock-bottom 10 percent beyond it. Maybe there's a reason you only play to 15 in streetball.

I know the instinct is to look at this game as some harbinger, good ("Michigan State will own the boards this season") or bad ("the Spartans have no one that can score"), but it's just one game. We still don't know if MSU's defense will play that well all season, or if the offense will catch up. But it is encouraging nonetheless to see the Spartans dominate the glass, hauling down nearly half of their misses while limiting the Tar Heels to just a quarter of theirs. Equally discouraging, however, is the fact that the team seems so dependent on Draymond Green. The player attempted over 26 percent of MSU's shots, and accounted for about 37 percent of the Spartans' rebounds. Yes, Green is a fine player that will pick up some hardware on his way to the NBA, but he's going to need a supporting cast. For what it's worth, this Branden Dawson fellow appears to be as good as advertised (10 points, 7 rebounds), but surely Tom Izzo wants more out of his backcourt. None of the non-Draymond point guard candidates (Brandon Wood, Keith Appling, Travis Trice) played well, or even looked like a point guard. So look for some better play when Michigan State regroups against Duke. Should be easy, right?

In other Big Ten action, everyone else took care of business. Some observations:

Other than MSU/Duke, most of the other teams are in tuneup mode this week. The exception comes when Ohio State hosts top-10 Florida, in a rematch of last year's rematch of fall 2007's rematch of the 2007 title game which was a rematch of a game earlier that season. Which is to say, these guys are not exactly strangers. They've split the 4 games of this mini-series so far. Purdue also faces Iona on Thursday, a possible mid-major upstart this season. So watch out for the Gaels–the team won 25 games last year, and didn't lose much in the offseason. Finally, Penn State travels to Connecticut to face off against Kentucky in the 2011 Basketball Hall of Fame Tip-Off Tournament. You gotta admire new head coach Pat Chamber's "eat the frog" attitude.