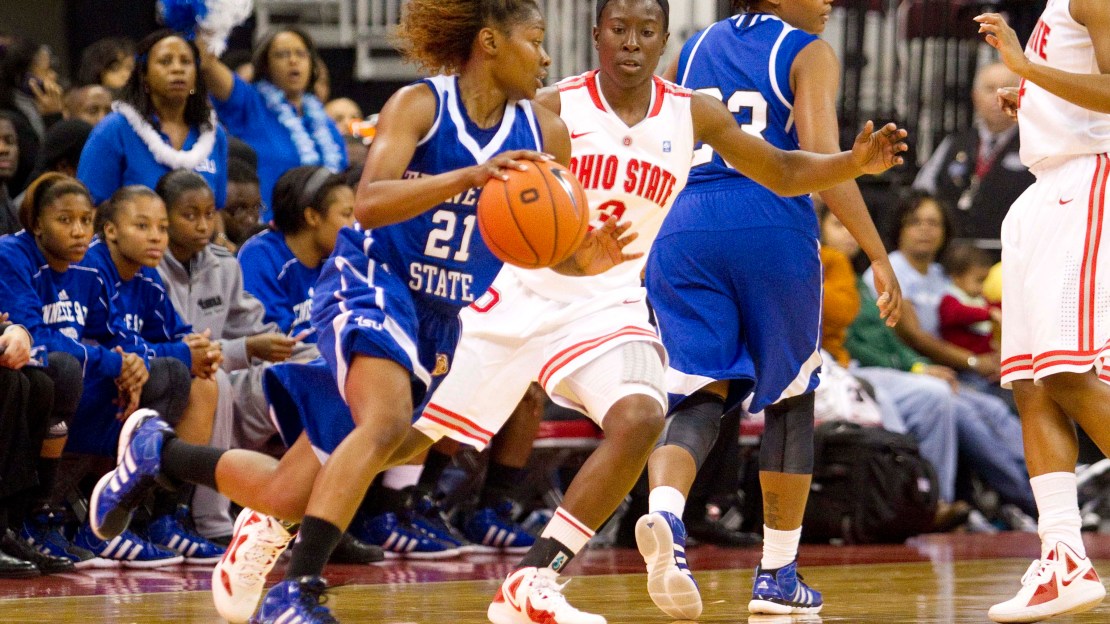 The Big Ten women's hoops season is opening with a flurry, and we've got a roundup of Sunday's busy slate of seven games. No. 12 Penn State and No. 17 Purdue both carded victories – the Nittany Lions beating Middle Tennessee, 65-49, and the Boilermakers dropping IUPUI, 75-45 – but the conference did suffer three defeats. Watch our highlights from Ohio State's victory over Tennessee State now and catch up on all the day's action and see more video in this post.

(OhioStateBuckeyes.com) Samantha Prahalis and Tayler Hill paced the Buckeyes with 17 points apiece to lead the Buckeyes to a 78-51 season-opening win over the Tennessee State Lady Tigers Sunday at Value City Arena. Prahalis, the preseason Big Ten co-player of the year, added six assists and went 9 of 9 from the free throw line while Hill added four steals and hit two deep three-pointers. Ohio State, the youngest team in the Big Ten this season, got big contributions from a couple freshmen, with 10 points apiece coming from Kalpana Beach and Raven Ferguson off the bench. Sophomore Ashley Adams added 10 points and six blocked shots.

(AP) Zhaque Gray scored 15 points, Maggie Lucas added 14 and No. 12 Penn State beat Middle Tennessee 65-49 on Sunday to win the Lady Lion Classic. The Lady Lions (2-0) were down by as many as 10 points twice, including a 12-2 deficit to begin the game. Penn State's first lead came with 8:50 remaining when Lucas hit a 3-pointer to cap a 12-2 Penn State run to make it 46-45. Reserve Ariel Edwards chipped in 10 points for the Lady Lions, who were just 5 of 21 from 3-point range. Icelyn Ellie and Kortni Jones each scored 13 points for the Blue Raiders (1-1), who took advantage of Penn State's poor shooting in the first half to take a 32-26 lead into halftime.

(FightingIllini.com) Kersten Magrum had a career-high 23 points and a career-best seven rebounds to help lift Illinois to a 72-42 victory at Cleveland State Sunday afternoon. Magrum made 8 of 11 field goals and 7 of 8 from the free-throw line in the victory. Both teams are now 1-1 on the season. Magrum was one of three players in double figures for the Illini. Sophomore Amber Moore added 12 points and five assists on 5 of 10 shooting. Freshman Ivory Crawford tallied 11 points, making all three of her three-point attempts.

(HawkeyeSports.com) On the first weekend of the women's basketball season, losing a game is not as grave for the University of Iowa as losing starting center Morgan Johnson to a knee injury. UNLV (2-0 overall) used a late flurry to floor the Hawkeyes (1-1), 69-59, in Sunday's championship of the Hawkeye Challenge on Mediacom Court inside Carver-Hawkeye Arena. The long-term fate of Johnson remains unknown. Johnson was battling on the offensive glass when she hit the floor — and stayed there — with 5 minutes, 12 seconds remaining and Iowa trailing, 55-54.

(UWBadgers.com) Led by Kevi Luper's 34 points and a strong defensive presence, the Oral Roberts Golden Eagles defeated the Wisconsin women's basketball team 80-63 Sunday afternoon at the Kohl Center. UW suffered its first loss of the season, falling to 1-1, while ORU remains undefeated at 2-0. Taylor Wurtz pulled down a Kohl Center-best 15 rebounds and put up 15 points en route to her fourth career double-double. Ashley Thomas and Jade Davis each added 11 points