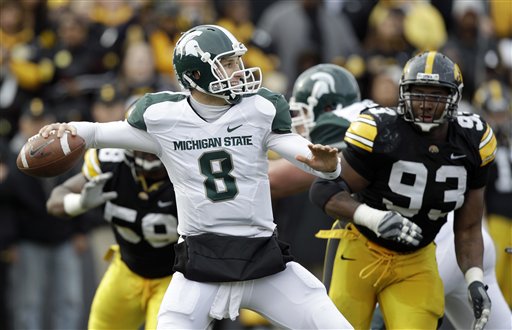 There's been a different team pacing the Big Ten in the BCS Standings since its first installment in Week 7, and the trend continued again this week. Following Week 11 action, Michigan State leads the conference, at No. 15, followed by No. 16 Nebraska, No. 17 Wisconsin, No. 18 Michigan and No. 21 Penn State, last week's Big Ten leader. See the full BCS Standings.

Five Big Ten teams ranked in Coaches Poll
The latest USA Today Coaches Poll was released Sunday morning, and there's a new team Big Ten team pacing the conference following Week 11 action. Michigan State comes in at No. 12 in the latest installment following its convincing win at Iowa, while No. 13 Wisconsin, No. 16 Nebraska, No. 18 Michigan and No. 21 Penn State round out the Big Ten's ranked teams. Come back later tonight for the release of the BCS Standings.