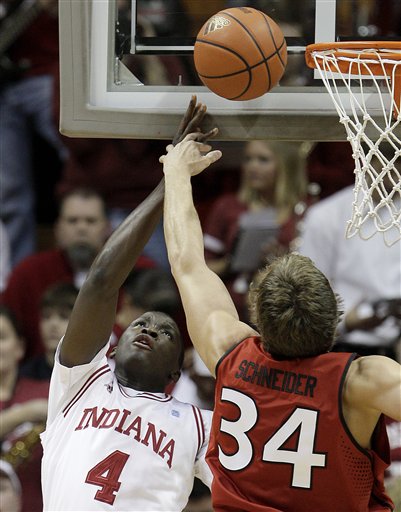 (AP) Victor Oladipo scored a career-high 21 points on Sunday to help Indiana beat Chattanooga 78-53. Jordan Hulls added 18 points and Verdell Jones III 16 for Indiana, which shot 50 percent from the floor and recorded seven blocks. Omar Wattad led Chattanooga, playing its season opener, with 24 points. The Mocs held a 45-36 rebounding advantage. The Hoosiers (2-0) have made 58 percent of their outside shots this season. They were coming off a 65 percent performance in Friday's opener against Stony Brook. Indiana went on a 25-9 run to extend its lead to 61-33 midway through the second half. See the box score. Watch our interview with former Indiana star and current director of basketball operations Calbert Cheaney inside, plus see our Narrative Science recaps.

FINAL: Victor Oladipo scored 21 points and Jordan Hulls added 18 points as they teamed up to lead Indiana to a 78-53 victory over Chattanooga on Sunday at Assembly Hall in Bloomington. The Hoosiers were able to carry momentum into the break and sustain it into the second half. Trailing 21-18 in the half, Indiana went on a 21-3 run to seize a 15-point advantage early in the second half. Omar Wattad was a bright spot for the Mocs in the loss with 24 points. The Hoosiers hit 50 percent of their field goals (25-of-5). Indiana was on fire from beyond the arc during the game, hitting seven threes and shooting 39 percent from long distance. The Hoosiers shot 68 percent from the charity stripe and made 21 free throws. Besides Oladipo's production and Hulls' stellar play, Verdell Jones III scored 16 points. Chattanooga shot just 27 percent from the field (17-of-62).