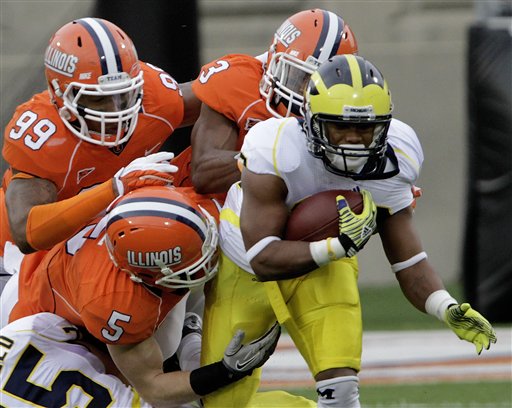 (AP) Fitzgerald Toussaint ran for 192 yards and a touchdown and backup quarterback Devin Gardner threw a key TD pass to lead No. 22 Michigan past Illinois 31-14 on Saturday. Denard Robinson didn't play after a big third-quarter hit. Details about his injury weren't available. In relief Gardner hit Martavious Odoms for a fourth quarter touchdown that gave Michigan (8-2, 4-2 Big Ten) a 24-7 lead after Illinois scored. The Illini (6-4, 2-4) finished with 214 yards of offense but had just 30 at halftime. For the fourth week in a row they didn't score in the first half and they've lost four straight. Read the full AP recap, see the box score and view the Big Ten scoreboard.

FINAL: Fitzgerald Toussaint broke out against Illinois, piling up 192 rushing yards and scoring one touchdown to lead No. 21 Michigan to a 31-14 victory on Saturday at Memorial Stadium. Home run plays keyed Michigan's (8-2) scoring attack. The Wolverines had six plays of 20 yards or more on their way to victory. Michigan added to the highlight reel when Toussaint rushed 65 yards with 14:55 left in the first quarter. The big gainer was part of a six-play drive capped off when Denard Robinson took a quarterback draw all the way for a nine-yard touchdown run. That gave the Wolverines a 7-0 lead. Michigan's defense stymied Illinois' (6-4) rushing attack. The Wolverines held the Fighting Illini to a mere 50 yards on the ground. Tavon Wilson showed good hands on defense for Illinois, picking off two Michigan passes. His biggest play came on a critical drive in the second quarter, when he intercepted Robinson on third-and-18 and returned it 47 yards. Michigan's Robinson passed for 91 yards, completing six of 11 throws. He threw two interceptions. Robinson was also a threat on the ground, as he rushed for 42 yards on 11 attempts. The Wolverines racked up 379 total yards, including 138 yards passing while completing eight of 16 attempts. Rushing was a key ingredient in Michigan's offensive mix, bringing it 241 yards on 46 carries.

FOURTH QUARTER: Michigan stuffed the run, giving up just 18 yards on the ground in the fourth quarter and the Wolverines kept the game out of reach for a 31-14 victory over Illinois. Michigan opened up the lead, 24-7, after Devin Gardner tossed a 27-yard touchdown to Martavious Odoms to end a three-play, 22-yard drive. The Wolverines began the drive with good field position after J.T. Floyd intercepted Nathan Scheelhaase's pass. The Fighting Illini closed the gap to 24-14 when Jason Ford turned a handoff into a one-yard touchdown to cap an 80-yard drive. Michigan made its lead 31-14 when Fitzgerald Toussaint pounded in a 27-yard touchdown run on the last play of a two-play, 40-yard drive. A.J. Jenkins clinched a 100-yard receiving game with 56 yards in the quarter, part of his eight-catch, 102-yard day for Illinois.

THIRD QUARTER: Illinois' Nathan Scheelhaase led the offense in the third quarter. He threw for 55 yards and ran for 16 yards and one touchdown, but the Fighting Illini have closed the gap to 17-7. Michigan expanded its lead to 17-0 thanks to a seven-play, 22-yard drive that ended when Brendan Gibbons made a 27-yard field goal. A fumble recovery by the Wolverines put Michigan at the Illinois 32-yard line to open the drive. Illinois polished off a 75-yard drive when Scheelhaase kept it himself for a 13-yard touchdown run to make the score 17-7. The Wolverines have possession at their own 22-yard line to start the fourth quarter.

SECOND QUARTER: In the second quarter, Michigan's Denard Robinson stood out. He ran for seven yards and one touchdown, and the Wolverines now lead 14-0. Michigan made its lead 14-0 when Robinson scrambled for a three-yard touchdown run on the last play of a seven-play, 41-yard drive. Jeremy Gallon's punt return set the Wolverines up to start the drive. Michigan ran the ball on all seven snaps on that drive. Illinois will get the ball to start the second half.

FIRST QUARTER: No. 21 Michigan picked up 156 yards in the ground game during the first quarter, and the Wolverines lead 7-0 at the end of the first quarter. Michigan's defense shut down Illinois, allowing only 13 yards of offense in the quarter. The Wolverines took the game's first lead after Denard Robinson kept it himself for a nine-yard touchdown run on the last play of a four-play, 80-yard drive. The key play on Michigan's drive was Fitzgerald Toussaint's 65-yard run. Toussaint clinched a 100-yard rushing game with 121 in the quarter, part of his 121-yard day through one quarters for the Wolverines. Michigan is poised to score with the ball at the Fighting Illini's 18-yard line to start the second quarter.

That's a season-high 4 sacks for that Michigan defense, which has been imposing, to say the least.

Illinois was showing signs of life on both sides of the ball. But Floyd's pick, then Odoms' TD quashes that. This is U-M's game to lose.

Can't believe @TrulonHenry9 drop that INT! Come on big bro! Haha get another one!

The last 20 minutes of this Michigan-Illinois game have been incredibly ugly, and not even in the charming old-school Big Ten way.