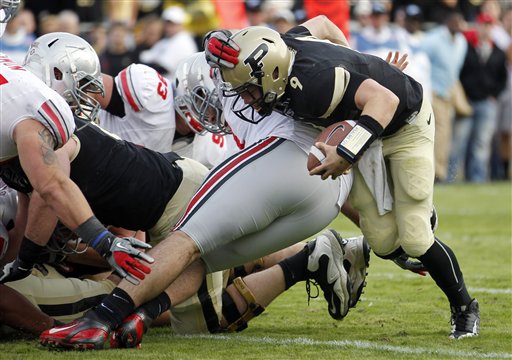 (AP) Robert Marve's 1-yard touchdown on a quarterback sneak in overtime gave Purdue a 26-23 win over Ohio State on Saturday. Ohio State (6-4, 3-3 Big Ten) took the ball first in overtime, and Drew Basil's 33-yard field goal gave the Buckeyes a 23-20 lead. Marve completed a 14-yard pass to Gary Bush on third-and-12 from the 15, then scored the game-winner on the next play. Ohio State drove down the field trailing 20-14 in the final minutes. On a fourth-and-3 from the Purdue 13, Braxton Miller scrambled and found Jordan Hall behind the secondary for a touchdown to tie the game, but Purdue's Bruce Gaston blocked Basil's extra point try. Purdue (5-5, 3-3) also upset Ohio State in West Lafayette in 2009. Read the full AP recap, see the box score and view the Big Ten scoreboard.

FINAL: Purdue took the lead in overtime and hung on for a 26-23 victory over Ohio State on Saturday at Ross-Ade Stadium. Robert Marve's one-yard touchdown run gave Purdue (5-5) its final lead. Ralph Bolden carried the offensive load for the Boilermakers, piling up 81 rushing yards and one touchdown on 18 attempts. Braxton Miller did his best to carry Ohio State's (6-4) offense, turning 16 carries into 43 rushing yards and one touchdown. Purdue racked up 362 total yards, including 233 yards passing while completing 25 of 37 attempts. The Boilermakers' running game proved effective, netting 129 yards on 42 rushes. The Buckeyes racked up 297 total yards. Along with Miller's stats in the passing game, Ohio State also added 165 yards rushing on 48 attempts. Miller threw for 132 yards while completing eight of 18 passes for the Buckeyes. Miller finished the game with two touchdowns and no interceptions.

FOURTH QUARTER: Ohio State's Braxton Miller threw for 38 yards and one touchdown and ran for 29 yards in the quarter, and the two teams are tied 20-20 at the end of the fourth. Purdue added to its advantage when Carson Wiggs kicked a 44-yard field goal, the finishing touch on a five-play, 18-yard drive to give the Boilermakers the lead, 20-14. Purdue's punt return put the Boilermakers at the Buckeyes' 45-yard line to open the drive. Ohio State tied the game at 20 after Miller and Jordan Hall combined for a 13-yard touchdown to end a 10-play, 66-yard drive. The Buckeyes drove across midfield after Dan Herron's 21-yard run from the 34-yard line. Ohio State went to the air just two times during that series. Going into overtime, Purdue has outgained the Buckeyes 337 yards to 288.

THIRD QUARTER: Braxton Miller had a productive quarter for Ohio State. He ran for 20 yards and one touchdown, but the Buckeyes have closed the gap to 17-14. A 58-yard drive that ended when Miller scrambled for a six-yard touchdown run helped Ohio State narrow the deficit to 17-14. The Buckeyes crossed midfield on Jordan Hall's 25-yard run from the 42-yard line. The rushing attack provided every yard for Ohio State during that march downfield. The Buckeyes have possession on their own eight-yard line to start the fourth quarter.

SECOND QUARTER: Purdue's front seven stepped up in the second quarter, allowing Ohio State to gain just seven rushing yards, and the margin is still 10, as the Boilermakers lead 17-7. A 68-yard drive that ended when Braxton Miller tossed a 38-yard touchdown to Jordan Hall helped the Buckeyes narrow the deficit to 10-7. Miller's 20-yard pass to Dan Herron from the 32-yard line pushed Ohio State into enemy territory. Purdue expanded its lead to 17-7 thanks to a 12-play, 88-yard drive that ended when Ralph Bolden pounded in a seven-yard touchdown run. The Boilermakers will get the ball to start the second half.

FIRST QUARTER: The offense led Purdue to 10 first-quarter points, and the Boilermakers lead 10-0 at the end of the first quarter. Purdue threw for 71 yards and ran for 65 yards in the quarter. The Boilermakers' defense held tough in the quarter, holding Ohio State to 11 total yards of offense. Purdue struck first when Carson Wiggs kicked a 19-yard field goal, the final play of a 10-play, 57-yard drive. Ralph Bolden's 22-yard run from the 41-yard line pushed the Boilermakers into enemy territory. Purdue had to settle for a field goal after failing to reach the endzone from the Buckeyes' two-yard line. The Boilermakers added to their advantage when Akeem Shavers pounded in a four-yard touchdown run, the clincher of an 11-play, 60-yard drive to give Purdue the lead, 10-0. The Boilermakers have possession at their own 49-yard line to start the second quarter.

Smh…on the way back to Columbus now ?

Congrats to all of Purdue nation!!! Great win today!

Robert Marve giveth to the Buckeyes (an interception late), and he taketh away (a win).

Are you kidding me??? Kawann Short is a #MONSTER… don't lie, you thought it was over huh? #BoilerUp

Braxton Miller has ice water running through his veins.

Why Miller even passes is beyond me.

Purdue's 11 players were the only ones in the stadium caught by surprise by a Braxton Miller QB draw.

Confirmed: Sweat is out with a concussion.

Boom Herron is running on the sideline. Looks fine from press box view.

Okay, Boilers, NO PASTA AT HALFTIME!

It's hard to win when you have 8 players and the other team 13. At least that's how it has looked in the first half here.

Robert Marve has been like a 32oz can of Red Bull for listing Boiler offense. Did Purdue REALLY lose to Rice this year?

Purdue up 10-0 on Ohio State. Both of these teams are so puzzling.

Why do I think next week's game against Penn State will be a 3-0 final? In overtime.

The Ohio State defense is making TerBush look like Terbow.