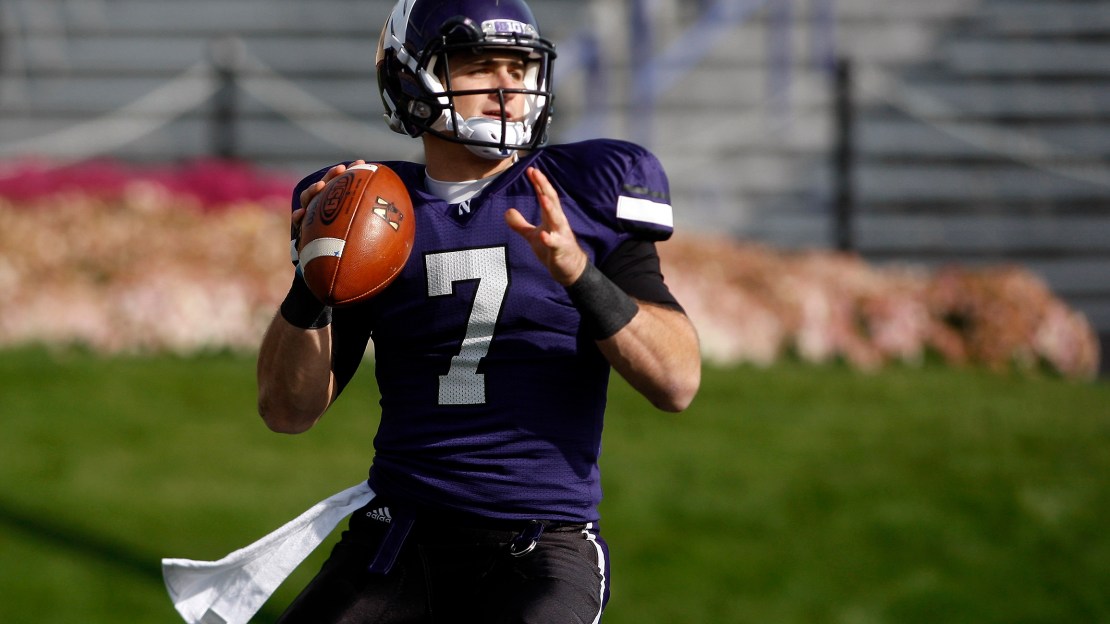 (AP) Dan Persa threw for a career-high 372 yards, Jeremy Ebert set a personal best with 208 receiving yards and Northwestern beat Rice 28-6 on Saturday. Persa also matched a career high with four touchdown passes, none more spectacular than a 90-yarder to Ebert in the first quarter. It was the second-longest completion in school history, and it set the tone as the Wildcats built a 21-0 halftime lead on the way to their third straight victory. Northwestern (5-5) suffered no letdown after a stunning 28-25 victory last weekend at then-No. 9 Nebraska. Read the full AP recap, see the box score and view our Big Ten scoreboard.

FINAL: One of the best receivers in the Big Ten, Northwestern's Jeremy Ebert torched Rice's secondary for a big day as he carried Northwestern (5-5) to a 28-6 victory on Saturday at Ryan Field. Ebert, who came in ranked No. 4 in the conference in receiving yards at 716 on the year, caught seven passes for 208 yards and two touchdowns. The Wildcats' passing game looked unstoppable at times against Rice's (3-7) defense. Northwestern's air attack couldn't be contained, as it torched the Owls for 397 yards and four touchdowns. Dan Persa completed 25 of 32 passes for the Wildcats. He threw four touchdowns. Northwestern's explosive offense used big plays to take down Rice. The Owls' defense gave up six plays of at least 20 yards. With 4:30 to go in the first quarter, Persa and Ebert combined for a 90-yard touchdown, the Wildcats' longest play on the day. The long touchdown gave Northwestern a 7-0 lead. Rice racked up 254 total yards, including 135 yards passing while completing 14 of 26 attempts. The Owls' rushing attack also contributed 119 yards to the total, with the tally coming on 30 carries.

FOURTH QUARTER: Northwestern ended its dominating performance with a powerful fourth quarter and capped off a 28-6 victory over Rice. The Wildcats expanded their lead to 28-0 thanks to a 10-play, 59-yard drive that ended when Dan Persa and Kain Colter combined for a three-yard touchdown. The Owls closed the gap to 28-6 when Tyler Smith ran nine yards to paydirt to cap a 62-yard drive. Rice used Jordan Taylor's 43-yard pass to Andre Gautreaux to fuel the drive.

THIRD QUARTER: The third quarter was an ugly display, as Northwestern and Rice totaled no points and one turnover between them and the margin is still 21, as the Wildcats lead 21-0. Northwestern is knocking on the door to begin the fourth quarter, with the ball at the Owls' 18-yard line.

SECOND QUARTER: Northwestern aired it out to the tune of 167 passing yards in the quarter, and the Wildcats now lead 21-0. Northwestern opened up the lead, 14-0, after marching down the field for a six-play, 80-yard drive that ended when Dan Persa and Jeremy Ebert combined for a 17-yard touchdown. The key play on the Wildcats' drive was Persa's 50-yard pass. Northwestern made its lead 21-0 when Persa threw a 15-yard touchdown pass to Demetrius Fields on the last play of a four-play, 55-yard drive. The Wildcats' Persa passed for 167 yards in the quarter to put him over 200 yards for the game. Persa has 278 yards through the air so far today. Northwestern is set to receive to start the second half.

FIRST QUARTER: Northwestern sniffed out Rice's rushing attack in the first quarter, holding the Owls to 21 rush yards and the Wildcats lead 7-0 at the end of the first quarter. Northwestern got things going through the air in the quarter, passing for 125 yards. The Wildcats got on the scoreboard first, rattling off a three-play, 96-yard drive that ended in a score when Dan Persa threw a 90-yard touchdown pass to Jeremy Ebert. Northwestern's Ebert reached the 100-yard receiving mark for the game thanks to three catches for 116 yards in the quarter, and currently sits with 116 yards in all. Rice has the ball at its own 10-yard line to begin the second quarter.

Persa to Ebert reminds me of Len Williams to Richard Buchanan!