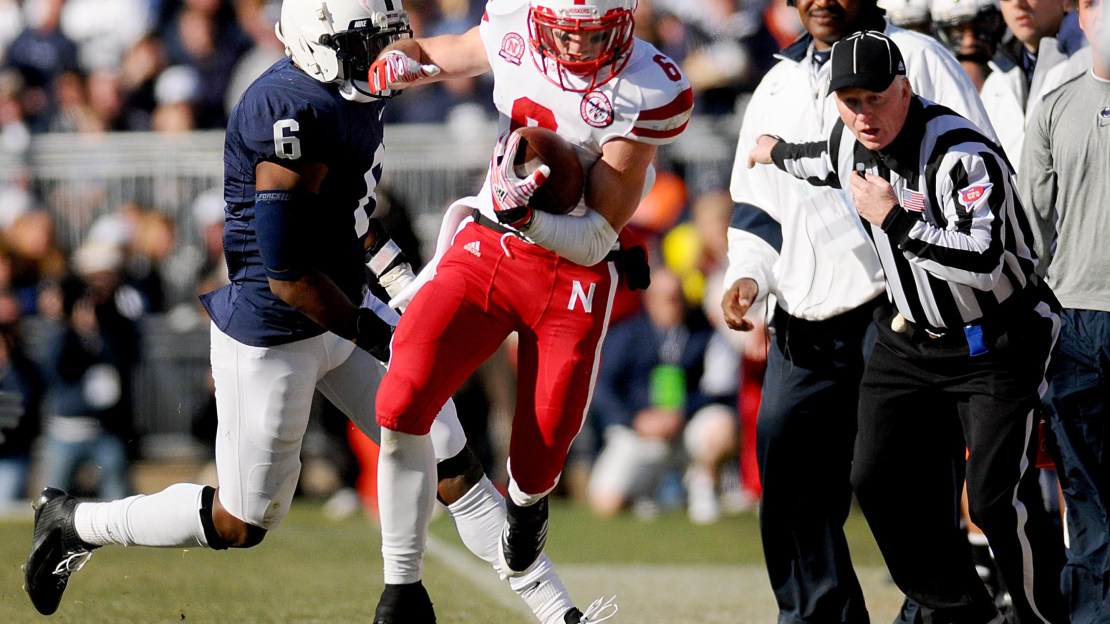 (AP) Capping the worst week in school history, No. 12 Penn State nearly overcame a 17-point deficit but was stopped short on a 4th-and-1 late in a 17-14 loss Saturday to No. 19 Nebraska. The outcome was secondary in Happy Valley. A tumultuous week that began with the arrest of former defensive coordinator Jerry Sandusky on shocking child sexual abuse charges ended Saturday with Penn State losing in its first game in 46 years without coach Joe Paterno, who was fired Wednesday. Rex Burkhead ran for 121 yards and a touchdown before the Nittany Lions scored 14 unanswered behind two second-half touchdown runs by Stephfon Green. Read the full AP recap, see the box score and view our Big Ten scoreboard.

FINAL: After building a 17-point lead, No. 17 Nebraska withstood a furious comeback by No. 12 Penn State and managed to pull out a 17-14 victory on Saturday at Beaver Stadium. Rex Burkhead carried the offensive load for Nebraska (8-2), piling up 125 rushing yards and one touchdown on 27 attempts. Stephfon Green did his best to carry Penn State's (8-2) offense, turning 17 carries into 71 rushing yards and two touchdowns. The Nittany Lions racked up 376 total yards, including 208 yards passing while completing 17 of 35 attempts. Rushing was a key ingredient in Penn State's offensive mix, bringing it 168 yards on 43 carries. Taylor Martinez threw for 144 yards while going 13-25 for the Cornhuskers. He threw no interceptions. Martinez also ran for 56 yards on 18 attempts. Nebraska's offense finished the game having gained 331 yards, including 144 passing yards on 13 completions. The Cornhuskers' rushing attack also contributed 187 yards to the total, with the tally coming on 48 carries.

FOURTH QUARTER: Stephfon Green led Penn State in the quarter. He ran for 45 yards and one touchdown, but the Nittany Lions managed to make things interesting, but fell 17-14. Penn State scored 14 unanswered points to close the game. A 51-yard drive that ended when Green turned a handoff into a six-yard touchdown helped the Nittany Lions narrow the deficit to 17-14. Nebraska's Rex Burkhead hit 100 yards rushing for the game in the quarter, part of his 125-yard rushing performance.

THIRD QUARTER: Nebraska gained 84 yards on the ground in the third, and the margin is still 10, as the Cornhuskers lead 17-7. Nebraska opened up the lead, 17-0, after Rex Burkhead pounded in a 14-yard touchdown run to end an eight-play, 52-yard drive. The Cornhuskers looked exclusively to the run game during that march downfield. An 82-yard drive that ended when Stephfon Green turned a handoff into a five-yard touchdown helped Penn State narrow the deficit to 17-7. The key play on the Nittany Lions' drive was Matthew McGloin's 40-yard pass. Nebraska has the ball at its own 35-yard line to begin the fourth quarter.

SECOND QUARTER: Nebraska's aerial assault is on point, as the Cornhuskers now lead 10-0 thanks to 82 passing yards in the quarter. Nebraska scored when Brett Maher drilled a 40-yard field goal to clinch a nine-play, 50-yard drive, giving the Cornhuskers the game's first lead. Nebraska threw just two times on that possession. The Cornhuskers added to their advantage when Ameer Abdullah ran two yards to paydirt, capping off a 12-play, 80-yard drive to give Nebraska the lead, 10-0. The Cornhuskers drove across midfield after Taylor Martinez's 24-yard pass to Kyler Reed from the 32-yard line. Nebraska will have possession to start the second half.

FIRST QUARTER: There were more punts than points in the first quarter and the game is tied 0-0 at the end of the first quarter. With neither team able to move the ball, there were five punts in the quarter. No. 12 Penn State will start the second quarter with the ball on its own 49-yard line.

Drives me nuts… Why not QB sneak, Penn State?

Who would ever have thought Stephfon Green would have the day he has had. That was his second touchdown.

Joe Paterno is NOT coaching this team. That was Matt McGloin's Heisman play.

Well, Penn State's Devon Still is kind of a monster on the D-line. Killing Nebraska today.

It looked like Bo Pelini just gave Alfonzo Dennard an earful on the sideline just now. The Sr CB slammed his helmet down in frustration

17 point lead is pretty much insurmountable for Penn State's offense unless the defense can score some points too.

I don't care how emotional or inspired the players are, Penn St. is one of my least favorite teams to watch play football.

Burkhead now at exactly 1000 yards on the season with that run. #Huskers

Silas Redd appears to have an injury with his right arm or shoulder and did not play the last three series.

Penn State D: You do realize it's going to be your job to score today, don't you?

Dennard is such a freak. Best cornerback in the country

That was … dare I say .. Favre-like for McGloin?

Scoreless first quarter. I haven't seen a TD in person since Oct. 29 after covering that 9-6 scrum last week in Tuscaloosa.

Silas Redd, ladies and gentlemen. He has been a rock all week.

Good luck to the #Huskers today! I have all the faith that they will be focused in an extremely tough environment #GBR #Nebraska

All that matters. The Victims. #PSU