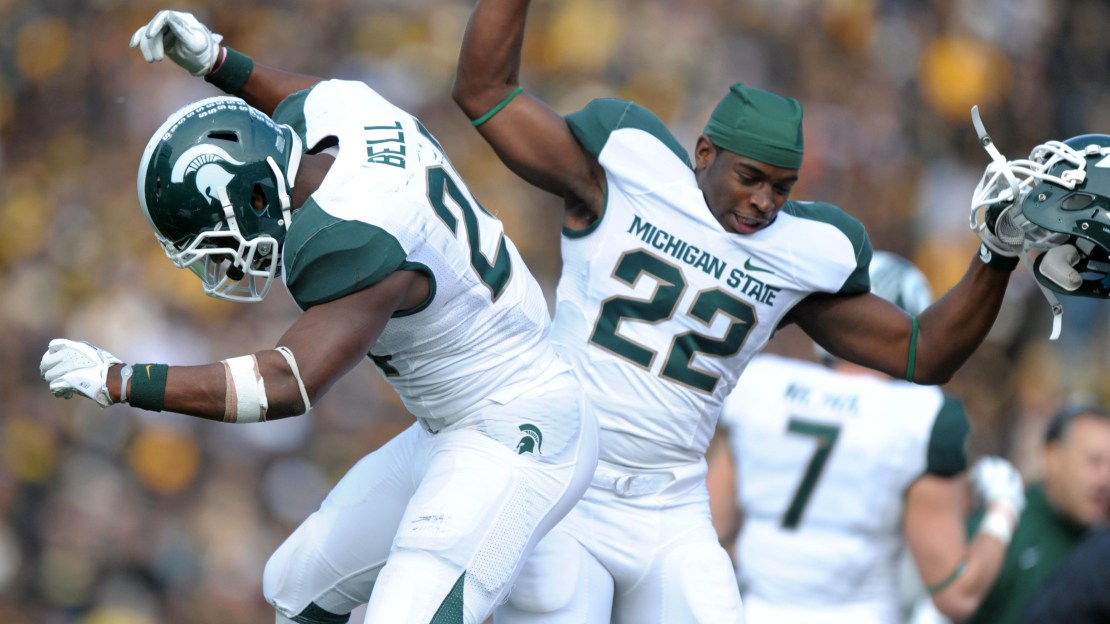 (AP) Kirk Cousins threw for 260 yards and three touchdowns and 13th-ranked Michigan State beat Iowa 37-21 to take control of the Big Ten's Legends Division. B.J. Cunningham caught a pair of TD passes for the Spartans, who snapped a seven-game losing streak at Iowa dating back to 1989. Michigan State (8-2, 5-1 Big Ten) took a commanding 31-7 lead with two touchdowns in a 36-second stretch late in the second quarter. Cunningham followed Le'Veon Bell's 25-yard TD run with a 22-yard touchdown catch to put Michigan State up by 24 at the break. The Spartans can now earn a spot in the Big Ten title game with wins over Indiana and Northwestern in the next two weeks. Read BTN.com senior writer Tom Dienhart's column and the full AP recap, see the box score and view the Big Ten scoreboard.

FINAL: Le'Veon Bell and Kirk Cousins teamed up to lead No. 13 Michigan State to a 37-21 victory over Iowa on Saturday at Kinnick Stadium. Cousins passed for 260 yards, while Bell ran for 111 yards and one touchdown. Michigan State's (8-2) offense dominated, ripping off huge chunks of yardage. The Spartans had six plays of 20 yards or more on their way to victory. With 9:27 to go in the second quarter, Cousins found Keshawn Martin open for a 67-yard pass, Michigan State's biggest gain of the game. The big play set up a 10-play drive that gave the Spartans a 17-7 lead after Dan Conroy made a 22-yard field goal. Iowa's (6-4) Marvin McNutt was productive despite the team loss. He scored one touchdown and snagged eight passes, good for 130 receiving yards. The Hawkeyes' James Vandenberg went 22 of 47 through the air for a total of 262 yards. Vandenberg tossed two touchdowns and one interception. Iowa's offense finished the game having gained 349 yards. In addition to Vandenberg's efforts through the air, the Hawkeyes could only muster 87 yards rushing on 30 attempts. Michigan State racked up 441 total yards, including 288 yards passing while completing 19 of 32 attempts. The Spartans' running game proved effective, netting 153 yards on 40 rushes.

THIRD QUARTER: Michigan State stuffed the run, giving up just seven yards on the ground in the third quarter and the Spartans now lead 34-21. Michigan State has given up 14 straight points. The Spartans opened up the lead, 34-7, after marching down the field for a nine-play, 47-yard drive that ended when Dan Conroy drilled a 31-yard field goal. Keshawn Martin's 28-yard pass to Brian Linthicum from the 39-yard line pushed Michigan State into enemy territory. Iowa put a bow on a 28-yard drive when James Vandenberg tossed a three-yard touchdown to Marvin McNutt to make the score 34-14. The Hawkeyes started in good field position when Jordan Bernstine's big kickoff return. Iowa closed the gap to 34-21 when Marcus Coker pounded in a two-yard touchdown run to cap an 80-yard drive. The Hawkeyes used Vandenberg's 48-yard pass to McNutt to fuel the drive. Iowa's McNutt hit 100 yards receiving for the game in the quarter, part of his 119-yard, seven-reception performance thus far. The Hawkeyes' Vandenberg hit 200 yards passing for the game in the quarter, part of his 208-yard passing performance thus far. The Spartans will start the fourth quarter with possession at their own 33-yard line.

FIRST QUARTER: Edwin Baker had a productive quarter for No. 13 Michigan State. He ran for 23 yards and caught a 17-yard touchdown pass, and the Spartans lead 14-0 at the end of the first quarter. Michigan State got on the scoreboard first, rattling off a seven-play, 64-yard drive that ended in a score when Kirk Cousins and B.J. Cunningham combined for a six-yard touchdown. The Spartans opened up the lead, 14-0, after marching down the field for a three-play, 19-yard drive that ended when Cousins found Baker open for a 17-yard touchdown pass. Johnny Adams' interception of a James Vandenberg pass set Michigan State up to start the drive. Iowa is threatening to score to start the second quarter and have the ball on the Spartans' eight-yard line.

Marvin McNutt is so good for Iowa. Tony Lippett gets the flag there. This remains a game because of McNutt. So dangerous.

Michigan St #Spartans have 34 points thru 3 qtrs at #Iowa. They had scored 26 combined pts in their 1st 3 road games this season.

Iowa exposed all the hidden truths about Michigan State in 2010 blowout. Spartans doing the same thing to 2011 Hawkeyes today.

That's definitely a fumble by Jordan Bernstine. From bad to worse for Iowa if there's an overturn.

That sound you just heard was panic from Kinnick Stadium. Iowa has dug itself a 24-7 lead. And I wonder if it can crawl out. Poor tackling.

Dear Iowa, you cannot run inside on the MSU DT's. Thank you

I think it's safe to say Marvin McNutt made the right move switching from QB to WR. Wow

If you're an Iowa fan — cover your eyes. Or turn the channel.

If Michigan State is able to run like this all game, it will make Kirk Cousins VERY effective and Sparty VERY tough to beat.

Best of luck to all the #Hawkeyes seniors at Kinnick today. Congrats on their careers! #SeniorDay #B1G