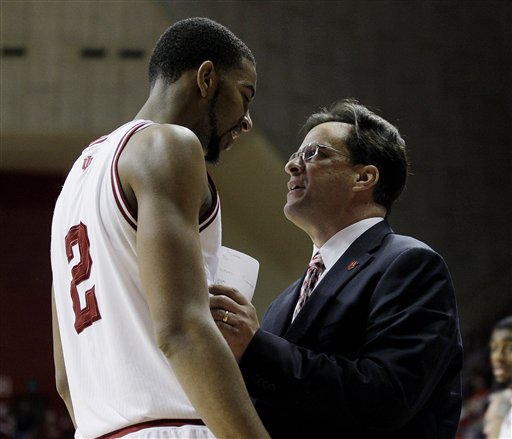 Since Kelvin Sampson blew the program up in 2008, the question on every Hoosier fan?s mind has been ?when will we be back??  The question is either completely normal or absurd, depending on the point of view.  Certainly, every program has suffered through lean years.  With Duke it was the Pete Gaudet Era, UNC suffered through the transition from Dean Smith to Roy Williams, and every couple of decades the NCAA lifts the lid on Kentucky basketball and is shocked (shocked!) by what it finds.

This is Indiana?s lean period.  In truth, the seeds of the current situation came toward the end of the Knight Era.  Bobby Knight is one of the best coaches we?ll ever see.  The guy practically invented the motion offense and perfected helpside defense.  Knight won three championships, but his teams fell off toward the end of his tenure, failing to reach the second weekend in each of his last six seasons in Bloomington.  With the other issues surrounding the program, the school cut ties with the General.  Mike Davis, his successor, actually saw some great early success, guiding the Hoosiers to the Final Four in his second season.  IU was clearly the best team in the Big Ten that season, but it was also a team that was pummeled by Southern Illinois, and dropped games to Butler and Miami as well.  Other than that season, however, Davis failed to reach the second weekend as well.

Enter Kelvin Sampson.  Sampson had an impressive enough background, and he was certainly an aggressive recruiter (Illini fans are still bitter over the Eric Gordon saga).  But whether it was cheating, hubris, negligence, or just plain laziness, Sampson got the program in some hot water over phone calls.  So when Tom Crean took over in the Spring of 2008, expectations were low and patience was high.

But what about now?  We?re entering year four of the rebuilding effort, and so far the team?s performance has moved from ?horrific? to ?pretty bad.?  Ideally, this is the season when things move into ?competitive.?  And there are plenty of reasons to think that will happen.  For one, IU returns a ton of minutes this season.  The losses are confined to Jeremiah Rivers (whose offense generally canceled out his defensive value), Maurice Creek (who didn?t play that much last season anyways), and Bobby Capobianco (who, somehow, averaged over 10 fouls per 40 minutes).  So there won?t be much hand-wringing over filling holes on the roster.

What?s more, IU features one of the conference?s most intriguing players in Victor Oladipo.  My affection for this young man?s style of play is well-known at this point, but he?s exactly the kind of player every coach covets but few can lay claim to.  He?s a guard that rebounds.  A freshman that plays defense.  An assertive player that knows his limitations.  No, Oladipo is not a very capable outside shooter, but he?s great just about everywhere else.  He very well could be the next great Hoosier.

Beyond Oladipo, there is, of course, Christian Watford.  Watford raised his game last year, shooting better and taking care of the ball.  No, he?s not the best rebounder for a 6-9 post player, but, well, that?s why you surround him with guys like Oladipo.  The problem with Watford, however, is that he still has difficulty hitting shots inside the arc:

This is a statline of a much shorter man than Christian Watford.  The forward?s inability to hit bunnies is puzzling but very real concern.  And it?s the one thing stopping him from being a First Teamer, because he?s pretty good otherwise.

The supporting cast is pretty good too.  Jordan Hulls became much more aggressive over the final slate of games, which is a real boost to an offense in need of shooters.  Despite a decrease in playing time, Derek Elston still has all of the tools needed to be an effective big man.  And Will Sheehey displayed potential as well.

Finally, we come to the elephant in the room–Cody Zeller.  By all accounts, Cody is the best Zeller.  He?s polished, shoots well, has excellent footwork, and has soft hands.  He?s also the Big Ten's best recruit this season, and will likely start from day one.

If you?re a Hoosier fan, you should be excited.  But before you start scouting NCAA Tournament locations, let?s temper some expectations.  Indiana?s defense was bad last year, and it was bad primarily because it didn?t guard the perimeter well and the Hoosiers hacked just about everyone that came into the paint.  While karate champion Capobianco is gone, the likes of Elston and Tom Pritchard aren?t exactly foul-adverse.  Zeller figures to take a lot of minutes, but you?re still expecting a freshman (who weighs somewhere between 215 and 230 pounds) to be more disciplined than his more experienced teammates.

And defense was not this team?s only issue last season, as IU finished 9th in the Big Ten in points per possession.  The short story is that Indiana is moving forward, but this isn?t the year to put dancing shoes on.  That said, no longer will Hoosier fans celebrate wildly over Big Ten wins or painstakingly search for moral victories in 15-point losses.  There will be at least a couple of teams looking up at Indiana this season, and if things break right, maybe even most of the conference will.

But a modest proposal: someone put Maurice Creek in a protective bubble.  That kid is too good to be hurt all the time.