Dienhart: Look ahead after a long, sad week 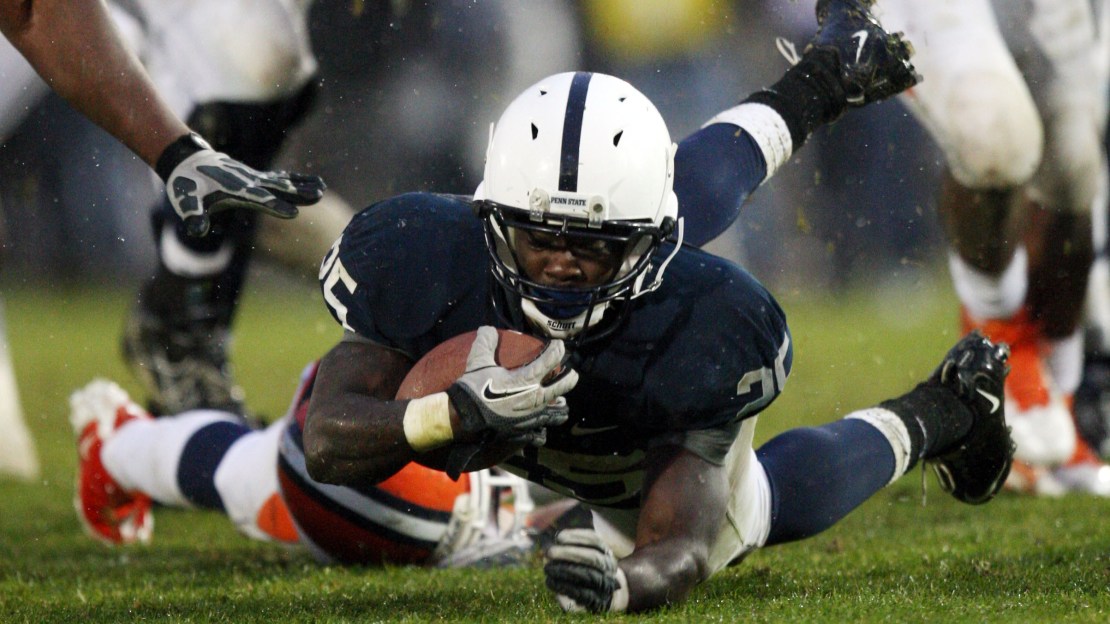 This weekend's nice collection of Big Ten games is highlighted by Michigan State at Iowa in a pivotal Legends Division tilt while Nebraska?s first trip to Penn State as a member of the Big Ten is the headliner in the Leaders Division. But the dark clouds of a child sex-abuse scandal that has cost coach Joe Paterno and others their jobs casts a long, dark shadow over Senior Day at Penn State.

Paterno will not be leading his Nittany Lions out of the tunnel. Longtime assistant coach Tom Bradley will be the team's interim head coach while another veteran assistant, Mike McQueary, won't be at the game due to threats. A larger-than-usual press throng will be all over the stadium watching to see how the school's student body reacts, especially after the Pennsylvania governor called for an end to any violence. And Nebraska? The Cornhuskers come to town a little bit on edge. It's somewhat difficult to focus on football after the revelations of the last week when even I questioned if this game should be played. All of that being said, maybe a little football is just what we need. Here are my weekly Big Ten football previews.

WHY YOU SHOULD WATCH: A battle for Legends Division supremacy, as each team still controls its destiny. A win by Michigan State would make it a heavy favorite, as its remaining games are against Indiana and Northwestern. But when the Spartans visited Iowa City last year, they got hammered, 37-6. And Iowa is 6-0 at home, coming off an inspiring 24-16 win over Michigan.

KEEP AN EYE ON: Iowa?s defense. The unit has been maligned much of the season, especially when it comes to stopping the run. But the Hawkeye defense looked good in a win over Michigan last week. And Iowa plays a lot of two-deep coverage, which is similar to a Nebraska defense that stifled Michigan State, 24-3, earlier this season. It?s vital for the Spartans to pass well, as they rank last in the Big Ten in rushing.

KEY MATCHUP: Michigan State defense vs. Iowa offense. This will be strength on strength and figures to be the matchup that decides this pivotal game. Can the balanced and hot Hawkeye offense-led by running back Marcus Coker-score enough against a Spartan team that is second in the Big Ten in total defense (249.4 ypg)? Michigan State is coming off a rough outing, allowing 415 yards in a 31-24 win over Minnesota last week.

WHY YOU SHOULD WATCH: Give the tragedy that?s unfolding at Penn State, it will be difficult to focus on football. Nonetheless, the Cornhuskers will arrive in State College, Pa., coming off a stupefying 28-25 home loss to Northwestern. Nebraska can?t afford another defeat if it wants to remain in the Legends race. The Nittany Lions surprisingly sit atop the Leaders Division with a two-game lead over Ohio State and Wisconsin, but it may be difficult to focus given the off-field issues that are unfolding on campus and set into motion the firing of Joe Paterno. Defensive coordinator Tom Bradley will serve as interim head coach.

KEEP AN EYE ON: Penn State?s mind-set. Dealing with a sputtering offense is one thing. Dealing with a huge off-field child sex-abuse scandal that already has claimed Paterno and the school president is another. Will the players and coaches be able to concentrate and focus?

KEY MATCHUP: Nebraska RB Rex Burkhead vs. Penn State RB Silas Redd. Whoever wins this battle of running back will likely lead his team to victory. Burkhead has been a workhorse but was dinged early last week in the Northwestern loss, when he ran 22 times for 69 yards and lost a fumble. Redd is a force who has ripped off five consecutive 100-yard rushing games.

NUMBER?S GAME: 8.6, average tackles for Penn State linebacker Gerald Hodges, one of the Big Ten?s most underrated players. He?ll need to be at his best to contain Nebraska quarterback Taylor Martinez.

KEY NOTE: Nebraska has won its last two road games vs. ranked opponents, knocking off No. 17 Oklahoma State in 2010 and No. 22 Missouri in 2009. But Bo Pelini is just 3-7 on the road vs. ranked foes overall.

WHY YOU SHOULD WATCH: Each team already is bowl eligible, so this one is about remaining in the hunt in their respective divisions. The Wolverines are coming off a tough 24-16 loss at Iowa. Illinois had last week off to contemplate a three-game losing streak. In mid-October, the Illini were 6-0, ranked No. 16 and thinking Leaders Division title. Now, it?s fighting to stay relevant.

KEEP AN EYE ON: Illinois? special teams. The Illini have had a punt blocked in each of the last two games.

KEY MATCHUP: Illinois QB Nathan Scheelhaase vs. the Michigan defense. Illinois has been plagued by slow starts during its three-game funk, getting shut out in the first half of each of the last three contests. Add it up, and the Illini have 28 total points in their last three games. Scheelhaase needs to regain his early-season form to charge up the attack. He?ll face a Michigan defense that has played better than expected and allowed only seven points in the second half last week at Iowa.

WHY YOU SHOULD WATCH: It?s a battle for Paul Bunyan?s Axe. But there?s more on the line than that for the Badgers. They are clinging to hopes of winning the Leaders Division. To do so, Wisconsin needs to win out and hope Penn State loses twice-including once in a season-ending visit to Madison. What are the 2-7 Golden Gophers playing for? Pride.

KEEP AN EYE ON: Minnesota QB MarQueis Gray. Last week, he led the Gophers to 415 yards in an oh-so-close 31-24 loss at Michigan State facing a defense that ranked No. 2 in the nation and was limiting foes to 228.8 yards. In fact, it may have been the best game of Gray?s career, as he hit 19-of-33 passes for a career-high 287 yards and three touchdowns. The junior also ran 21 times for 70 yards.

KEY MATCHUP: Wisconsin RB Montee Ball vs. the Minnesota front seven. If the Gophers can?t at least slow down Ball, they will have little chance to win. Ball is on a roll, coming off a career-high 223-yard rushing effort in a 62-17 win vs. Purdue. He now has 1,076 yards rushing in 2011, giving the Badgers? a 17th 1,000-yard rusher in the last 19 years. Minnesota is coming off a strong effort in a loss at Michigan State, limiting the Spartans to 106 yards rushing.

NUMBER?S GAME: 33, games in a row that Wisconsin QB Russell Wilson has thrown a touchdown pass.

WHY YOU SHOULD WATCH: Purdue upset Ohio State the last time the Buckeyes visited West Lafayette. Could it happen again? Ohio State will arrive on a roll, having won three in a row behind a strong defense, punishing ground game and emerging QB Braxton Miller. The Buckeyes are still in the hunt for the Leaders title but must win out and hope Penn State-which plays at Ohio State next Saturday–loses twice. The Boilermakers are fighting for their bowl life and come into the game limping, having lost two in a row and three of four.

KEEP AN EYE ON: Ohio State DL John Simon. Few if any defensive linemen in the Big Ten are playing better than Simon, who had a career-high 10 tackles last week in a 34-20 win over Indiana along with notching his team-best sixth sack of 2011.

KEY MATCHUP: Ohio State?s offensive line vs. Purdue defensive line. The Buckeyes are big, tough and physical up front. Ask Indiana, which got trampled for 346 yards rushing as Ohio State had three 100-yard rushers for the first time since 1989. That?s bad news for a Boilermaker defensive front that was steamrolled for 364 yards rushing in a 62-17 loss at Wisconsin last week.

NUMBER?S GAME: 1,140, yards allowed the last two week by Purdue in lopsided losses at Michigan and at Wisconsin.

KEY NOTE: Purdue yielded a school single-game record 62 points in a loss at Wisconsin last week, breaking the mark of 59 allowed at Minnesota in 1993.

WHY YOU SHOULD WATCH: The Wildcats are coming off one of the biggest wins in school annals, a 28-25 triumph at Nebraska. The defense showed previously never before seen resolve in muting the Husker ground game, while the offense continued to show versatility regardless of who is under center: Dan Persa or Kain Colter. For the record, Persa is expected to start after dinging his left shoulder at Nebraska and missing the second half. Northwestern needs two more wins to be bowl eligible for a fourth season in a row.

KEEP AN EYE ON: The Northwestern defense. It needs to pick up where it left off last week, when it limited Nebraska to 149 yards rushing, more than 100 below its average. If the Owls can?t run, they will have little chance.

KEY MATCHUP: Kain Colter vs. the Rice front seven. Colter is a dynamic and unique weapon. The freshman is a force at quarterback, running and passing. Colter also doubles as a good receiver. This dynamic playmaker needs to get multiple touches, as he almost single-handedly led the Wildcats to victory last week in Lincoln, Neb., after he took over for Persa. Colter hit 4-of-6 passes for 115 yards and a touchdown and ran 17 times for 57 yards and two touchdowns.

NUMBER?S GAME: 7, number of players who have caught at least 10 passes this year for Northwestern.