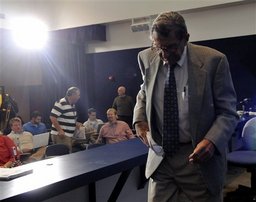 The Penn State Board of Trustees announced Wednesday night that football coach Joe Paterno and president Graham Spanier have been terminated in the wake of the recent scandal at Penn State. Read PSU.edu's release. Defensive coordinator Tom Bradley will serve as the interim coach. Paterno, 84 and in his 46th season as the head coach, announced earlier in the day that he was going to retire following the season. Penn State plays Nebraska on Saturday at Beaver Stadium, which is senior day and would have been Paterno's final home game. Read the AP story.

On BTN Wednesday night, Dave Revsine, along with analysts Gerry DiNardo and Chris Martin, hosted a 90-minute special on the Penn State scandal. Watch all of our video clips from the show. Also, watch Revsine's interviews with former Penn State players. BTN.com senior writer Tom Dienhart posted a column on the scandal, as well. You can catch up on all the latest Penn State news with our AP story archive and by following BTN.com's Paterno coverage.

Penn State players, past and present, tweet about JoePa:

Wake me up…this is a nightmare!

I know that something had to b done and it was going to start from the top just saying it could have been handle better..

I can't believe this

Joe paterno fired WOW this is a dream right