Dienhart: On The Penn State Tragedy 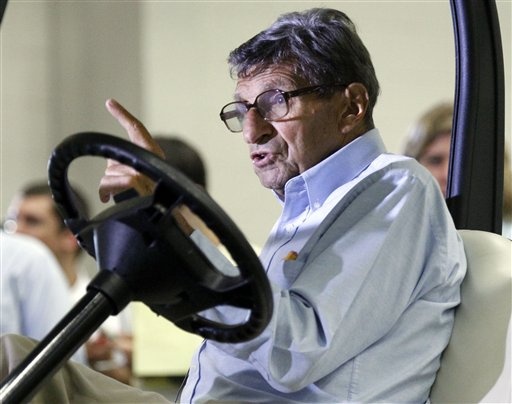 What?s unfolding at Penn State is one of the greatest tragedies in the history of collegiate sports.

The allegations that former Penn State defensive coordinator Jerry Sandusky sexually abused children are undoubtedly horrific and sickening. But even more disturbing is the revelation that people in a position of power didn't do enough and alert authorities about the situation after being told of the alleged abuse.

Bottom line: Penn State seemed more interested in protecting its image than doing the right thing. The cost of that decision: The school?s good name.

This is an incident that will stain Penn State forever. All of those years of image building, of painting an idyllic picture of a staid university that plays by the rules and is nestled in a nirvana dubbed "Happy Valley" has been trashed in minutes. And the inaction of the main characters – Penn State president Graham Spanier, athletic director Tim Curley and coach Joe Paterno – will cost them all their reputations and possibly even more.

What about protecting the children who were abused? Who was speaking out for them? Who was looking out for their best interest? These men were leaders. And they failed miserably. Instead of riding off into a blaze of glory as the all-time winningest FBS coach, Paterno will punctuate his career with a black mark that never will go away.

Those 409 victories don?t seem so important now, do they? In fact, they almost seem trivial. Yes, Paterno has done a million good things and performed many good deeds during his 46-season run as head coach, but this sordid episode threatens to wash it all away.

This is a coach who preached about building young men, of developing character, of doing the right thing. But when given a chance to do the right thing and tell legal authorities about what he knew when his bosses were doing nothing about it, Paterno dropped the ball. He failed morally. And that?s a million times worse than losing a Homecoming game.

So many of us are asking: "Why, JoePa? Why didn?t you do more? Was the pursuit of the all-time win record that important? Was the protection of his program?s image that vital? Or did you just not think it all the way through? And if not, why not?"

We may never know all the answers. And the ones we end up getting may either ring hollow or leave us asking more questions. Curley has requested a leave of absence. Reports indicate that Spanier is on the way out. And Paterno has announced that he will retire at the end of the season.

Even more unreal: A football game is scheduled for this Saturday at Penn State. Nebraska is coming to town. This looked like an important game as recently as just last week. Now, it's insignificant.

Should it even be played? How can players and coaches focus on a game now? How can fans show up and shake a pom-pon for Penn State knowing what they know? Maybe out of respect for the victims and the families, the game should be postponed. Maybe the rest of Penn State?s season should be cancelled. That?s an epic decision, but we are witnessing an epic event.

This is a program and athletic department that has been rocked to the core by sickening allegations that have the entire nation white hot with rage.

Perhaps Penn State should focus on getting its house in order and not worry about playing football. Anywhere Penn State goes the rest of the season, this story will follow. But whatever you do, don?t weep for anyone other than the children and the families involved in this American tragedy. They had no choice in this matter.