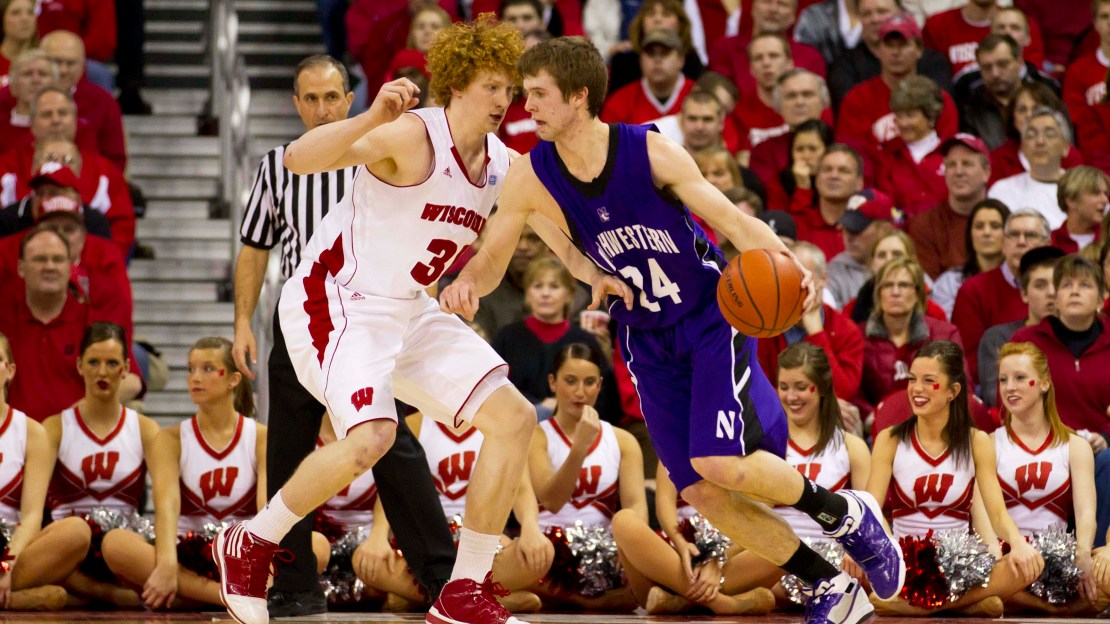 Our season previews roll along in reverse order of expected finish. We've covered Penn State and Iowa. Up next: the Northwestern Wildcats. It feels like we are becoming a Geeky broken record when it comes to Northwestern. Every fall, we praise Bill Carmody's highly efficient offense but ask if the defense will improve enough to push the Wildcats into the NCAA Tournament. This season is no different. Take a gander at Northwestern's adjusted efficiencies over the past four seasons: The offense, represented by the white line, just keeps getting better. Last season, Northwestern had the nation's 18th most efficient offense. Given the limitations of this roster–namely the lack of offensive rebounding and an inability to get to the foul line–there's really not much higher for the offense to go.

The defense, on the other hand, has hovered at mediocre-to-bad for awhile now. Remember that, for defensive efficiencies, the lower the better. For reference, a middling Big Ten defense last season had an adjusted efficiency around 95, which would be at the very bottom of this chart. Iowa, Wisconsin, Penn State, and Minnesota all finished around that mark. If the Wildcats had simply defended at that middling level, their efficiency profile would have looked a lot more like that of Villanova or George Mason, two teams who received at-large bids rather comfortably.

So can this defense make the leap? It's certainly possible. Carmody's defensive track record in Evanston isn't stellar, but he's at least had decent defenses a couple times. His best was in 2004-05, when Vedran Vukusic and T.J. Parker led a unit that was pretty good at forcing turnovers (an aside: that squad also included a sophomore Tim Doyle, who may or may not have started using Super Mario Brothers analogies at that point). When looking at Carmody's defensive history, the big question that pops to mind is: where have all the turnovers gone? Time for another chart: This chart shows where the Northwestern defense ranks nationally in each of the defensive four factors. Since we're talking about ranks, it's better to be closer to the bottom of this chart. It's immediately evident that Carmody's teams used to be quite good at forcing turnovers (shown by the pink line). So what happened? Some of it appears to be a deliberate choice by Carmody to get bigger. In 2007-08, the Wildcats forced all kinds of turnovers, but they were so bad at everything else that it didn't matter. They were also extremely short on the interior. The following season, Carmody addressed that issue by bringing in a crop of tall freshmen, including Luka Mirkovic, Kyle Rowley, and John Shurna. That worked fairly well for one season, as the turnovers kept coming while everything else improved. The defense still wasn't good, but it was getting better.

Then, in 2009-10, the turnovers vanished like Kaiser Soze, and what remained was a defense with no clear strength. Last season, the turnovers became even less frequent, and opponents returned to making shots like they were all layups. If the Wildcats could somehow get their field goal defense back on the downward slope it was previously on, that in itself could deliver the improvement they need, but that's easier said than done.

Personnel-wise, this season's roster has only one major change in the loss of point guard Michael Thompson. The 5-10 iron man was a fantastic floor general and shooter, but his defense left much to be desired. This becomes clear when looking at a defensive measure called Stops:

Stops is a counting stat that factors in steals, blocks, and rebounds relative to how valuable each of those things are to a particular team. Thompson posted the fewest stops per 40 minutes of any Wildcat. It's noteworthy that Alex Marcotullio and JerShon Cobb, the two players likely to take most of Thompson's minutes, were significantly better by this measure. Whether the offense can be as good without Thompson is a fair question, but it looks like his absence might actually help the defense.

All told, the data supports the idea that we'll see some defensive improvement from Northwestern, but a big leap seems unlikely. With that in mind, our projection is for the Wildcats' prolific offense to yet again miss out on March Madness.