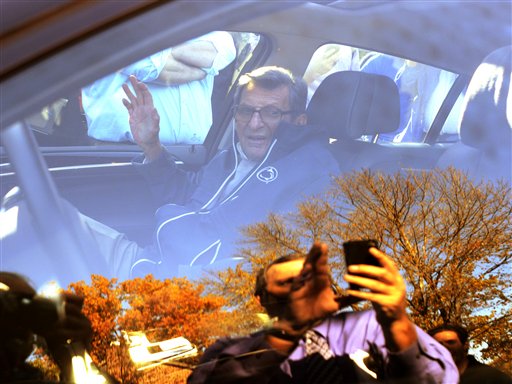 Our Big Ten Network analyst Gerry DiNardo  joined Dave Revsine on the air for a special Tuesday night report to cover the latest news at Penn State surrounding former longtime assistant Jerry Sandusky, Sandusky's criminal charges and the impact on Paterno and the Penn State football program. BTN.com posts the entire report online in this post, and BTN will follow up with more Wednesday from Big Ten Football & Beyond. The report is also available on BTN's YouTube page.

Paterno, a Hall of Famer and the winningest coach in Division I history, attended football practice Tuesday. Earlier in the day Paterno was scheduled to meet reporters as he normally does each week, but the press conference was canceled. The Penn State coach also did not appear on the weekly Big Ten Conference teleconference to discuss the upcoming weekend's football game. Later Tuesday evening, hundreds of fans staged a raucous rally outside Paterno's home Tuesday evening and the coach appeared briefly, along with some family members.

From the AP report:

"It's hard for me to say how much this means," the 84-year-old coach said.

"As you know, the kids that were the victims, I think we ought to say a prayer for them."

Asked if he was still the coach, Paterno didn't answer but a young woman who stood with her arm around him replied: "Now is not the time."

On Sunday Penn State's Board of Trustees and President Graham Spanier received a request from Director of Athletics Tim Curley to be placed on administrative leave. Spanier said that Mark Sherburne, Associate Athletic Director for Administration, will serve as interim Athletic Director until Curley's legal situation is resolved. Read the full Penn State release at PSU.edu. Also, here's a statement from the Penn State Board of Trustees.

The AP also reported that Paterno's support among the Penn State board of trustees was described as "eroding," threatening to end the 84-year-old coach's career. A person familiar with the trustees' discussions and who used the term "eroding" said it was unclear what the consequences for Paterno will be and that a decision could be rendered before the board meets on Friday, the AP said. Paterno's son, Scott, said his father hasn't spoken with Penn State officials or trustees about stepping down (read the entire AP story here).

Today on Twitter, Pete Thamel of The New York Times reported this:

BREAKING: @markcviera and I report that Joe Paterno will not coach next season. Officials are planning his departure. http://t.co/9YMSirNe

The link goes to a story that begins:

"Joe Paterno?s tenure as coach of the Penn State football team will soon be over, perhaps within days or weeks, in the wake of a sex-abuse scandal that has implicated university officials, according to two people briefed on conversations among the university?s top officials."

NYT report premature. No discussions about retirement with JVP.

Penn State's next football game is at home against Nebraska. The last time the Nittany Lions played they survived an ugly offensive performance to beat Illinois 10-7 on Oct. 29, allowing Paterno to pass Eddie Robinson as the all-time Division I leader with 409 wins. Read the full AP preview here.