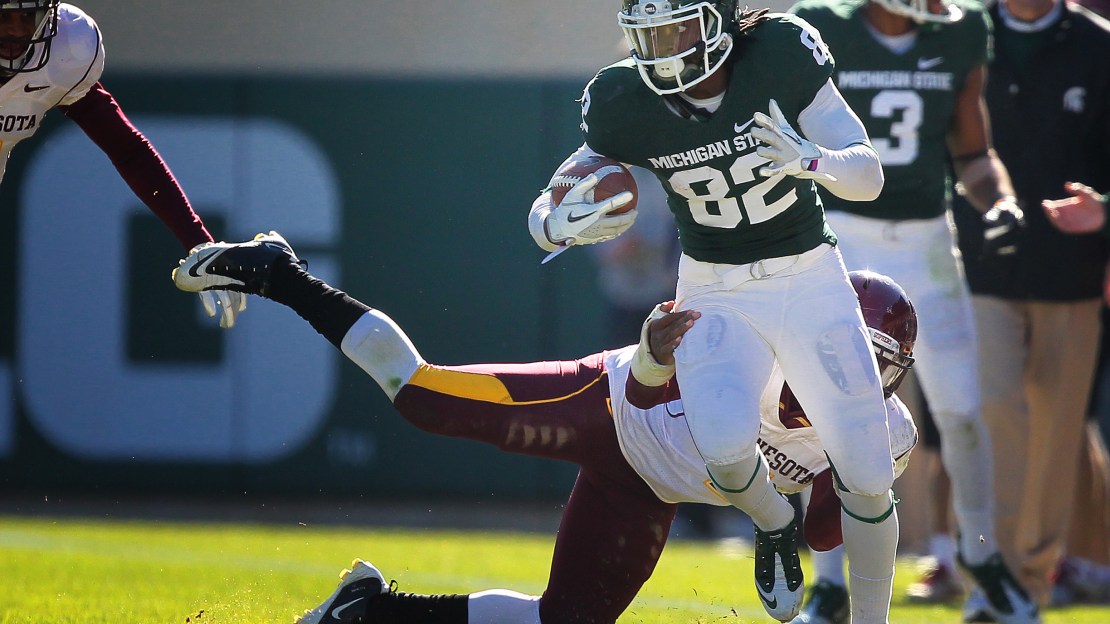 Lots of interesting storylines and angles to watch in Week 11, as the divisional chases firm up-at least a little. Two games will go a long way toward determining who wins each division: Michigan State at Iowa is a big Legends clash, while Nebraska at Penn State is a major Leaders encounter. But there also are other intriguing matchups this Saturday.

Ohio State may be the hottest team in the league and looks to continue that trend at Purdue, where it lost the last time it visited West Lafayette. Wisconsin visits Minnesota in the battle for Paul Bunyan?s Axe. The Badgers, who have won the last seven meetings but are 0-2 on the road in 2011, will try to stay on an upward trend after pinning 62 points on Purdue last week.

Michigan plays at Illinois in a matchup of teams that are trying to right their ships. The Wolverines are coming off a close loss at Iowa, while Illinois was off last week and is looking to end a three-game losing skid after streaking to a 6-0 start.

Northwestern steps outside league play to welcome Rice, a WAC team that is 0-5 on the road. The Wildcats are coming off a stunning victory at Nebraska to remain in the hunt for bowl eligibility for a fourth season in a row after enduring a five-game losing streak earlier in 2011.

Following is a look at the best of the best for Week 11:

BEST MATCHUP: Iowa offense vs. Michigan State defense. This is strength on strength. The Spartan defense paces the Big Ten (249.4 ypg), while the Hawkeye offense is hot and brings deadly balance with the three-headed monster of QB James Vandenberg, RB Marcus Coker and WR Marvin McNutt.

PLAYER ON THE SPOT: Michigan QB Denard Robinson. He had the Wolverines within ear shot of tying the game in the waning moments at Iowa last week, but Michigan fell, 24-16. But ?Shoelace? didn?t have one of his better days, completing only 17-of-37 passes (45.9 percent) for 194 yards with two touchdowns and an interception. Now, Robinson and Michigan go to Illinois, a desperate team that has lost three in a row and was off last week.

KEEP AN EYE ON: Nebraska?s ground game. The stats tell you that the Cornhuskers rank second in the Big Ten in rushing (237.7 ypg). But Nebraska couldn?t get a consistent push last week in a stunning 28-25 home loss to Northwestern. The Huskers had just 122 yards rushing (3.5 yards per carry) vs. a Wildcat defense that had struggled vs. the run all season. How will Nebraska run vs. a Nittany Lion defense that is No. 3 in the Big Ten against the run (111.9 ypg)?

BEST COORDINATOR MATCHUP: Nebraska offensive coordinator Tim Beck vs. Penn State defensive coordinator Tom Bradley. Beck has done a tremendous job in his first season pushing the buttons on the Cornhusker attack, as Nebraska ranks second in the Big Ten in scoring (34.7 ppg). He has added dimensions to the offense and quickened the pace. But Beck will face his toughest test yet vs. a Bradley unit that paces the Big Ten in scoring defense (12.4 ppg). Bradley is a sage mind who is one of the best not just in the Big Ten-but in the nation.

BEST COACHING MATCHUP: Michigan State?s Mark Dantonio and Iowa?s Kirk Ferentz. Each is among the best in the nation-and either could win Big Ten Coach of the Year honors. The two will match wits in this key Legends Division clash that figures to leave the loser on the outside looking in. Still, few envisioned Michigan State or Iowa being in this spot in mid-November. Kudos to the coaches.

BEST QUARTERBACK MATCHUP: Watching Iowa?s James Vandenberg clash with Michigan State?s Kirk Cousins will be fun. But I like Wisconsin?s Russell Wilson vs. Minnesota?s MarQueis Gray. Wilson?s numbers speak for themselves. The senior is the nation?s most efficient passer (196.7), hitting 71.6 percent of his attempts for 2,238 yards with 21 touchdowns and just three interceptions. He also has run for 276 yards and four scores.

Gray is blossoming before our eyes, as he?s coming off perhaps his best game of the season in a loss at Michigan State. The junior hit 19-of-33 passes for a career-high 287 yards with three touchdowns. Gray also ran for 70 yards.