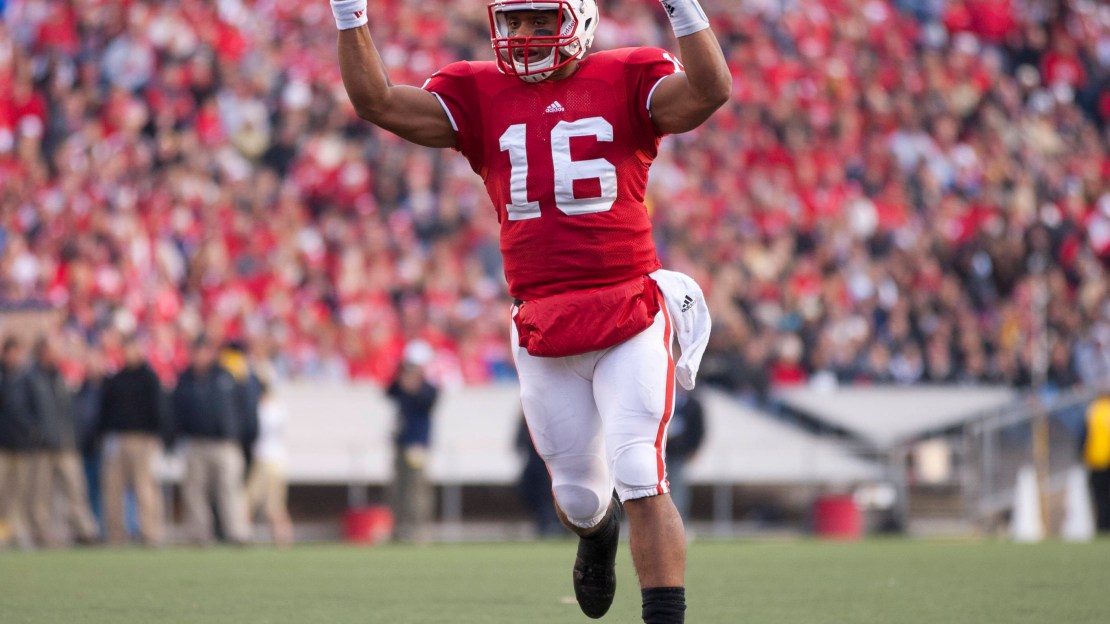 The Big Ten Trophy Tracker is coming into sharper focus as the season hits the final stretch. With only three week left in the season, there?s a new player on top of Graham-George Offensive Player of the Year checklist. And it?s a big, physical running back from the Legends Division who just may carry his team to the Big Ten title game.

See BTN.com senior writer Tom Dienhart's top 3 candidates for all 14 of the inaugural postseason trophies in this post.

THE BUZZ: I hate to knock down Redd for not playing, but I have to push Coker to the top of the list. The big, bruising sophomore has carried the Hawkeyes into the thick of the Legends? race, running for over 100 yards and two touchdowns in each of the last four games. Wilson remains a model of production, efficiency and leadership.

THE BUZZ: Simon deserves to shoot up the charts, as he has been the top player on a surging Buckeye defense that has led the charge during a three-game winning skein that has Ohio State in the hunt in the Leaders Division. Borland paces the Big Ten in tackles and is third in tackles for loss.

THE BUZZ: Ferentz is new to this list, thanks to how he has kept the Hawkeyes in charge of their destiny in the Legends Division despite some defensive issues. Another coach to watch is Ohio State?s Wunderkind Luke Fickell.

THE BUZZ: Miller didn?t wow with his passing in a win over Indiana, but he dazzled with his ample rushing skills with 105 yards on the ground on just 14 carries. The highlight was a beautiful 81-yard touchdown jaunt that was the longest ever by a Buckeye signal-caller.

THE BUZZ: Konz continues to anchor the top line in the Big Ten, a unit that enjoyed perhaps its best effort of the season in a 62-17 destruction of Purdue that saw the Badgers notch 364 yards rushing and 605 yards overall. Adams appears here for the first time after helping escort three 100-yard rushers last week, a feat Ohio State had not accomplished since 1989.

THE BUZZ: Simon has been a disruptive force for a defense that has carried the Buckeyes into contention in the Leaders Division, ranking second in the Big Ten in sacks. Mercilus paces the conference in sacks and tackles for loss. Still remains the ultimate cog up front.

THE BUZZ: Wilson remains the class of the Big Ten, showing deadly efficiency in hitting 15-of-20 passes for 205 yards and two touchdowns in a cakewalk victory over Purdue. Vandenberg continues to improve as a passer and decision maker. Only Wilson has more passing yards and touchdown tosses than Vandenberg.

THE BUZZ: All thee have over 1,000 yards rushing, with Coker pacing the Big Ten with 1,101. Ball is coming off a career-high 223-yard rushing effort vs. Purdue and also has been a touchdown machine with 21 rushing scores. It?s tough to leave Nebraska?s Rex Burkhead and Ohio State?s Dan Herron off this list.

THE BUZZ: The Iowa defense has had its ups and down, but Hyde has been a standout all season. Dennard is rounding into the all-star many envisioned for him in the preseason before injury delayed his start to 2011.

THE BUZZ: Borland is a Tasmanian Devil who excels making plays sideline to sideline. Teammate Mike Taylor also could be on this list. He?s having a monster year. Ohio State?s Andrew Sweat is another linebacker worth watching. David will leave Lincoln as an all-time great.

THE BUZZ: Ebert pops on this list after a big game at Nebraska. He has 51 catches for 716 yards with eight touchdowns, which ranks second in the Big Ten. Jenkins? 68 receptions far and away pace the Big Ten. McNutt tops the league with nine touchdown grabs. Michigan State?s B.J. Cunningham is on the precipice of this list.

THE BUZZ: Dunsmore is the class here, boasting 33 receptions for 367 yards and six touchdowns. Pedersen has 24 catches and seven scoring grabs and doubles as a good blocker in the Badgers? physical ground game.

THE BUZZ: Maher leads the conference with 15 field goals. No one has a better percentage of success than Fera and Basil (12-of-14, 85.7 percent).

THE BUZZ: Webster?s big leg continues to lead the Big Ten with a 45.5-yard average, which ranks seventh in the nation. Maher is eighth in the country with a 45.45-yard average.