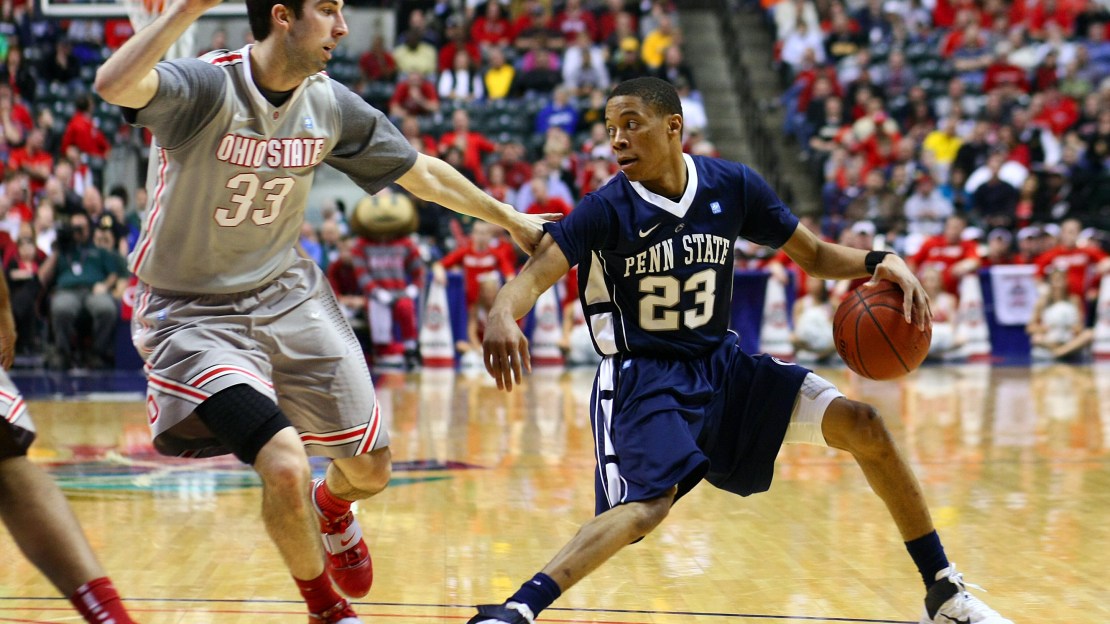 With the 2011-12 regular season nearly upon us, we here at Big Ten Geeks will be previewing all 12 conference members over the next couple weeks, in reverse order of expected finish. In other words, sorry Penn State fans; you're up first.

After a thoroughly unimpressive nonconference campaign that included a stunning home loss to Maine, the 2010-11 Nittany Lions scrapped together nine conference wins in a tough Big Ten. This landed them squarely on the NCAA bubble on the eve of the Big Ten Tournament, and Ed DeChellis' team took full advantage of the opportunity by knocking off Indiana, Wisconsin, and Michigan State on consecutive days. Ohio State was too much for Talor Battle and company in the title game, but the Lions had done enough–Penn State was invited to the NCAA Tournament for the first time in a decade.

A last-second loss to Temple ended the season, and it was immediately clear that a major rebuild would have to occur. After all, four of the starters were seniors, and DeChellis used less of his bench than all but two Division I coaches. The remaining roster was Tim Frazier and a bunch of question marks.

With this in mind, DeChellis' sudden departure for the head spot at Navy makes more sense. Sure, Navy has only posted a winning record in two of the past nine seasons, but at least there's job security to be had. DeChellis probably saw exactly what we see–an inexperienced roster that will struggle mightily–and decided to get out while the getting's good. As far as career moves go, it's no Michael Jordan to the Wizards.

But this isn't an Ed DeChellis preview–this is a Penn State preview. Taking over the reigns is Patrick Chambers, a 39-year-old Pennsylvania native who guided Boston U to the NCAA Tournament last season. Big Ten fans might remember his Terriers defeating Indiana in Puerto Rico two seasons ago. And hey, he's a career 2-0 at home against Maine.

Chambers spent only two seasons at Boston, but it's clear from that stint that he is not opposed to a perimeter-oriented offense. In his two seasons, the Terrier took 40 percent of their shots from beyond the arc and made threes at a 36 percent clip. Defensively, Chambers' teams aimed to make you miss without fouling, eschewing forced turnovers as a weapon. That should sound familiar, as avoiding fouls and not forcing turnovers was standard practice under DeChellis. In these ways, the approach may not change much from what Penn State fans are used to seeing:

As for the roster inherited by Chambers, it really is Tim Frazier and the Mysterians. The 6-1 Frazier has a well-earned reputation as a defensive stopper, but his offensive contributions thus far have been mostly limited to dropping dimes. Without Talor Battle, Jeff Brooks, or David Jackson around, passing first will no longer be Frazier's best option. A season-ending flourish does give some hope that Frazier can step into this role–he averaged 10 points and shot a sizzling 64 percent from three over the final 11 games–but he was still extremely deferential to his teammates. In fact, over the entire 2010-11 season, Frazier's shot diet exceeded 20 percent in just three games. The good news is that he shot better in those games than he did overall:

There's a chicken-or-the-egg question here–did Frazier shoot better because he was allotted more shots, or was he shooting more because he was hot? Regardless, it will be interesting to see how a guy with an average shot diet of 12 percent adapts to becoming his team's best option. In the first exhibition game, Frazier took a shot diet around 30 percent and posted a lowly 40.6 effective field goal percentage, though he did do a nice job of getting to the foul line. Penn State needs a big offensive season out of Frazier if they hope to be competitive.

Another player that potentially could take a lot of shots is 6-4 sophomore Jermaine Marshall, who showed flashes  of scoring ability as a redshirt freshman. Right now, Marshall is suspended for violating team rules, but he should see plenty of time if and when he returns. The only experienced interior option is 6-8 junior Billy Oliver, whose reputation as an accurate shooter has yet to translate to on-court results.

Beyond that, Chambers has very little experienced talent to work with. In other words, Penn State fans shouldn't be expecting a Fabolous season. It seems a foregone conclusion that the Nittany Lions will occupy the Big Ten cellar this season, but, hey, a rebuild has to start somewhere.