Dienhart: What I Learned in Week 10 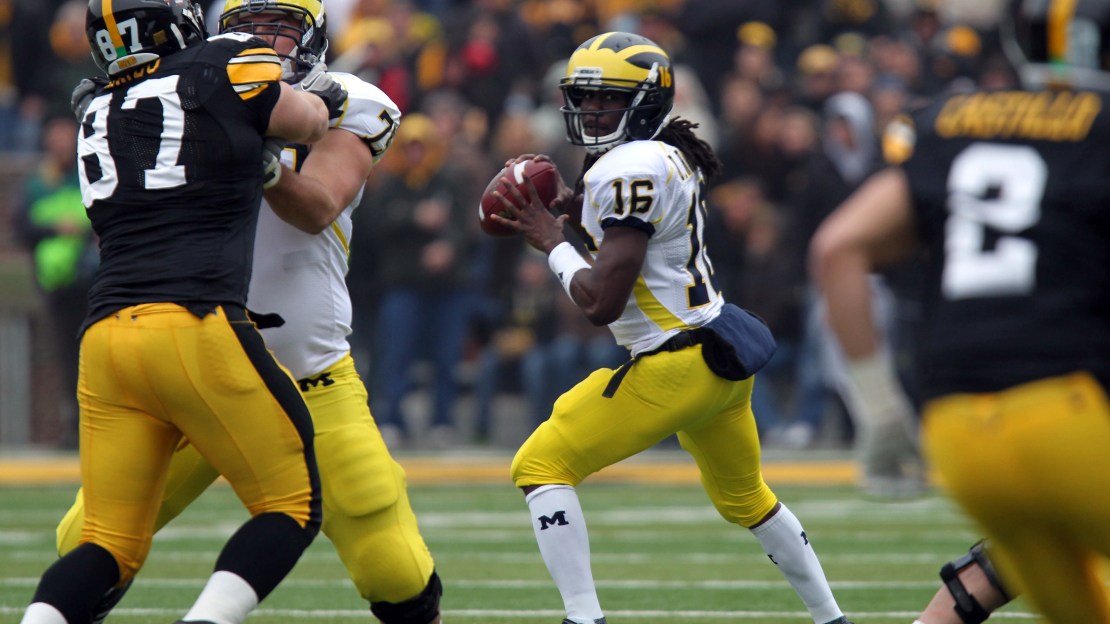 The first Saturday in November was filled with a big surprise: Northwestern winning at Nebraska. That scrambled the Legends Division race, which may come down to a battle between Michigan State and Iowa. Here?s what else I learned on Saturday.

1. The move to divisional play has been genius. With the season coming down the home stretch, there are multiple teams still in the running for division crowns. In the Legends, Michigan State and Iowa are sitting best with each controlling their own destiny, but Nebraska and Michigan still could be factors with hot finishes and some help. Penn State-which was off–sets the pace by two games in the Leaders, but Ohio State and Wisconsin remain in the running. Bottom line: No way this many schools still would be playing for a title this late in the season under the previous conference format.

2. Michigan still has work to do. The Wolverines impressed in jetting to a 7-1 start, but the program?s limitations were exposed in a 24-16 loss at Iowa. Denard Robinson is a spread-option quarterback trying to operate a West Coast scheme. And he?s still not a polished passer. There also is no marquee running back, and the defense lacks playmakers along the front seven. But give first-year coach Brady Hoke time. He?ll get it done, just maybe not in 2011.

3. Nebraska handed out the Blackshirts too early. After consecutive strong defensive efforts, highlighted by a 24-3 manhandling of Michigan State last Saturday in which they allowed only 187 yards, the Cornhusker staff gave the starting defenders and key reserves black practice jerseys in a tradition that dates to the 1960s. Alas, Nebraska?s defense got ripped in a 28-25 home loss to 17-point underdog Northwestern, allowing 468 yards. Now, the Huskers (7-2 overall; 3-2 Big Ten) will have a tough time winning the Legends Division.

4. Minnesota (2-7) and Indiana (1-9) are building strongly toward the future. Yes, neither will play in a bowl this year and each got beat on Saturday (the Gophers fell, 31-24, at Michigan State and the Hoosiers lost, 34-20, at Ohio State), but each program is making strides and still playing hard. And that?s a tribute to the first-year coaches: Kevin Wilson at Indiana and Jerry Kill at Minnesota. Dynamic quarterbacks are fueling the strong efforts in November, with MarQueis Gray and Tre Roberson continuing to develop and impress. The futures look bright.

5. Marcus Coker is the best running back in the Big Ten. I know all about Penn State?s Silas Redd, Nebraska?s Rex Burkhead, Ohio State?s Dan Herron and Wisconsin?s Montee Ball, among others. But I think Coker is better than all of them. He just busted off his fourth consecutive 100-yard, two-touchdown effort (121, 2 vs. Northwestern; 138, 2 vs. Indiana; 252, 2 vs. Minnesota; 132, 2 vs. Michigan) on Saturday in a big win over the Wolverines, pushing him over 1,000 yards for the season. The sophomore sensation is a 230-pound workhorse who has put the Hawkeyes on his back and just may carry them to the Legends Division title game.

BIGGEST SURPRISE: Few outside of Evanston saw Northwestern dumping Nebraska, 28-25. The Huskers had won three in a row and may have been the hottest team in the Big Ten. The Wildcat attack was impressive playing much of the game with backup QB Kain Colter, who took over for an injured Dan Persa. This was a Northwestern (4-5) team that had lost five in a row at one point this season. Now, the Wildcats are aiming for a fourth bowl in a row with three home games remaining. Nice work, Fitz!

BIGGEST DISAPPOINTMENT: Nebraska?s flop was a stunner, as the Huskers had won eight home games in a row and was playing great defense. Plus, QB Taylor Martinez played well in defeat, hitting 29-of-38 passes for 298 yards and two touchdowns. But Nebraska was gashed for 464 yards and ran for only 118. Also, Purdue may have hit bottom, allowing a school-record 62 points at Wisconsin.

TOP GAME: No last-minute heroics, although Michigan almost pulled off some drama, throwing into the end zone for a potential game-tying touchdown (with a two-point conversion) in the waning moments of a 24-16 loss at Iowa. My vote goes to the back-and-forth Minnesota at Michigan State game that saw the Spartans score 10 unanswered fourth-quarter points to rally for a 31-24 triumph and remain in prime position in the Legends derby.

TOP PLAY: Braxton Miller?s 81-yard touchdown run in a 34-20 victory over Indiana was a thing of beauty and it set the school-record for longest TD run by a quarterback, this from a true freshman (watch and rate the play!). He zigged a little; he zagged a little; he looked spectacular a lot. The kid is gonna be special.

TOP RUSHER: Wisconsin RB Montee Ball sliced and diced Purdue for a career-high 223 yards on a mere 20 carries (11.2 ypc) in a 62-17 demolition of Purdue. Ball also scored three touchdowns, giving him a school single-season record 24. He needs only three more to break the league season mark.

TOP PASSER: No 300-yard passers but still some nice efforts. Taylor Martinez completed 29-of-38 passes for 298 yards and two touchdowns, but Nebraska lost to Northwestern at home. Michigan State?s Kirk Cousins rebounded from a tough game at Nebraska to hit 23-of-34 passes for 295 yards and two touchdowns in a comeback home win over Minnesota, while the Gophers? MarQueis Gray connected on 19-of-33 for 296 yard and three touchdowns in the loss.

TOP SPECIAL PLAY: It really was five kickoff returns by Purdue?s Raheem Mostert, who notched a school-record 206 yards on those runbacks. The freshman had a 49-yard return and a 74-yard run back.

SNEAK PEEK AHEAD: Nebraska?s 28-25 loss at home to Northwestern took luster off the Cornhuskers? trip to Penn State this Saturday. That means Michigan State?s game at Iowa is the headliner tilt. The Spartans and Hawkeyes both control their destiny in the Legends Division. The winner will be primed to win the title and advance to the championship game. No one saw that back in August.