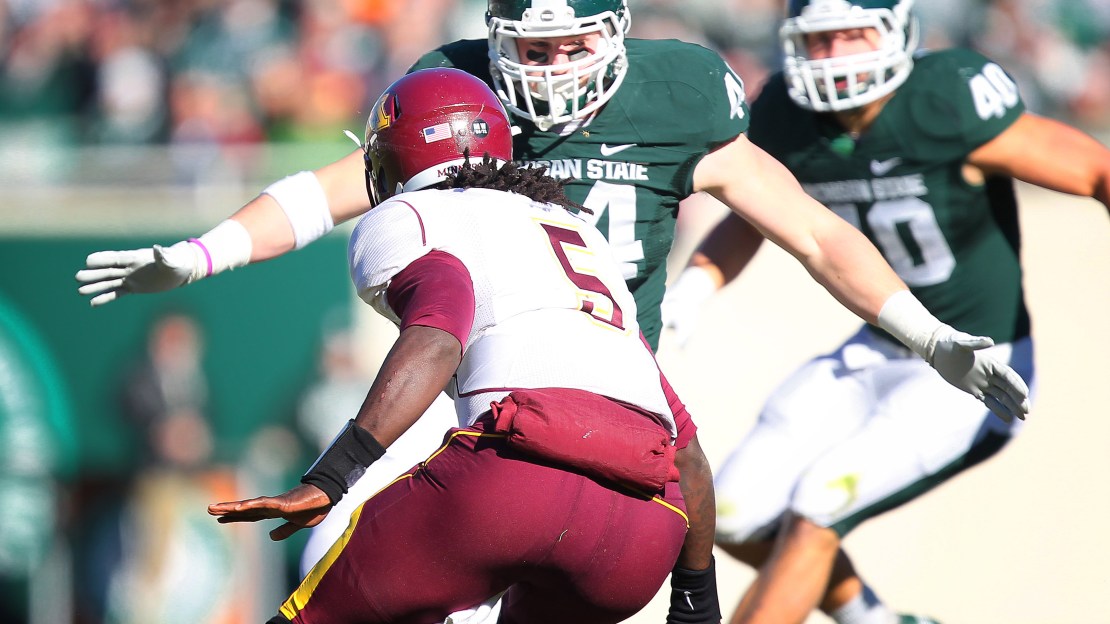 FINAL: Le'Veon Bell broke out against Minnesota, piling up 96 rushing yards and scoring two touchdowns to lead No. 17 Michigan State to a 31-24 victory on Saturday at Spartan Stadium. Da'Jon McKnight was a bright spot for Minnesota (2-7), hauling in nine catches for 174 receiving yards in a losing effort. Michigan State (7-2) didn't capture the lead until the fourth quarter. With 10:58 to go, Bell pounded in a 35-yard touchdown run to give the Spartans a 31-24 lead. Michigan State's offense dominated, ripping off huge chunks of yardage. The Golden Gophers' defense gave up six plays of at least 20 yards. With 10:50 to go in the first quarter, Kirk Cousins found B.J. Cunningham open for a 69-yard pass, the Spartans' biggest gain of the game. Later in the drive, Cousins found Keith Nichol open for a four-yard touchdown pass, which tied the score at 7-7. Cousins threw for 295 yards while completing 23 of 34 passes for Michigan State. Cousins finished the game with two touchdowns and no interceptions. Cousins had a trusted receiver in Keshawn Martin. He hauled in seven catches for 77 yards. Trenton Robinson showed good hands on defense for the Spartans, picking off two Minnesota passes. He came up big during a crucial moment in the third quarter, when he intercepted MarQueis Gray on third-and-12. Michigan State racked up 401 total yards. The Spartans' rushing attack contributed 106 yards on 28 carries in addition to Cousins' passing effort. Gray threw for 296 yards while going 19-32 for Minnesota. He tossed three touchdowns and two interceptions. Gray also ran for 70 yards on 21 attempts. The Golden Gophers racked up 415 total yards, including 296 yards passing while completing 19 of 34 attempts. Minnesota also moved the ball on the ground, earning 119 yards on 40 attempts.

FOURTH QUARTER: Michigan State captured the lead in the fourth quarter and hung on for the 31-24 win over Minnesota. With 10:58 to go, Le'Veon Bell ran 35 yards to paydirt to give the Spartans the lead, 31-24. Michigan State closed the game on a 10-point run. The Spartans tied the score at 24 apiece after Dan Conroy kicked a 39-yard field goal to put a bow on a five-play, 19-yard drive. Trenton Robinson's interception of a MarQueis Gray pass put Michigan State at the Golden Gophers' 41-yard line to open the drive. The Spartans scored on Bell's run to break the 24-24 standstill in favor of Michigan State. The play finished off a four-play, 58-yard scoring drive.

THIRD QUARTER: Michigan State is on upset alert at the end of the third quarter, trailing Minnesota by a score of 24-21. The Golden Gophers held the Spartans to negative rushing yardage (-8 yards) in the quarter. MarQueis Gray's 15-yard touchdown pass to Da'Jon McKnight gave Minnesota the lead, 24-21, and was the final play of a 10-play, 80-yard drive. The Golden Gophers' Gray reached the 200-yard passing mark for the game thanks to 71 in the quarter, and currently sits with 234 yards in all. Michigan State has the ball at Minnesota's 22-yard line to begin the fourth quarter.

SECOND QUARTER: Michigan State leads 21-17 at the end of the second quarter, but Minnesota continues to hang around. The Spartans held the Golden Gophers to just 17 rushing yards in the quarter. Michigan State got even after Le'Veon Bell turned a handoff into a one-yard touchdown to end a four-play, 54-yard drive that tied the score at 14. Kirk Cousins' 31-yard pass to Keith Nichol from the 46-yard line pushed the Spartans into enemy territory. A 15-play, 83-yard scoring drive by Minnesota snapped the 14-14 tie, as Jordan Wettstein drilled a 27-yard field goal. Cousins' two-yard touchdown pass to Todd Anderson put Michigan State on top 21-17, putting a bow on an eight-play, 74-yard drive. The Spartans capped a last-minute drive by scoring with four seconds left on the clock. Michigan State's drive took 52 seconds in all. The Spartans drove across midfield after Cousins' 21-yard pass to B.J. Cunningham from the 43-yard line. Michigan State didn't run a single time on that drive. The Spartans' Cunningham topped 100 yards receiving for the game in the quarter, and has plenty of time to add to his 104 yards and three catches. Michigan State's Cousins hit 200 yards passing for the game in the quarter, part of his 223-yard passing performance thus far. The Golden Gophers' Da'Jon McKnight hauled in two catches for 33 yards in the quarter to put him over 100 yards receiving for the game. McKnight has 121 yards on the day so far. Minnesota will receive to start the second half.

FIRST QUARTER: Minnesota holds a 14-7 advantage over No. 17 Michigan State at the end of the first quarter in what would be an upset. The Golden Gophers' passing attack looked sharp, as Minnesota threw for 97 yards in the quarter. The Golden Gophers got on the scoreboard first, rattling off a four-play, 82-yard drive that ended in a score when MarQueis Gray and Da'Jon McKnight hooked up for a 64-yard touchdown. The Spartans tied the score at seven apiece after Kirk Cousins tossed a four-yard touchdown to Keith Nichol to polish off a five-play, 90-yard drive. Michigan State used Cousins' 69-yard pass to fuel the drive. To break the 7-7 standstill in favor of Minnesota. The play polished off a one-play, 26-yard scoring drive. A fumble recovery by the Golden Gophers set Minnesota up to start the drive. The Spartans are poised to score with the ball on the Golden Gophers' one-yard line to start the second quarter.

Le'Veon Bell shoves you and you move. Nice stiff arm. Good drive just when things were getting shaky for the Spartans. Up 31-24.

Most exciting Gophers' game since? Wait. Since last wk. Hard to believe from how the Big 10 season started. Defense again has to get a stop.

In the first half, Cousins has recorded his 21st career 200-yard passing game and Cunningham his seventh career 100-yard receiving game.

Cousins is at his best when no-huddle two-minute drill is on. Hint. Hint. Hint. No-huddle more often. Take advantage of depth. 21-17 msu

First time Gophers have led after first quarter since North Dakota State game when they were up 7-0. But Bison scored 28 points in 2nd Q.

MarQueis Gray is hard to catch. He may never get sacked.

Wow, Gophers up early on Michigan State. Maybe the lights are coming on for that team. Big win last week over Iowa.