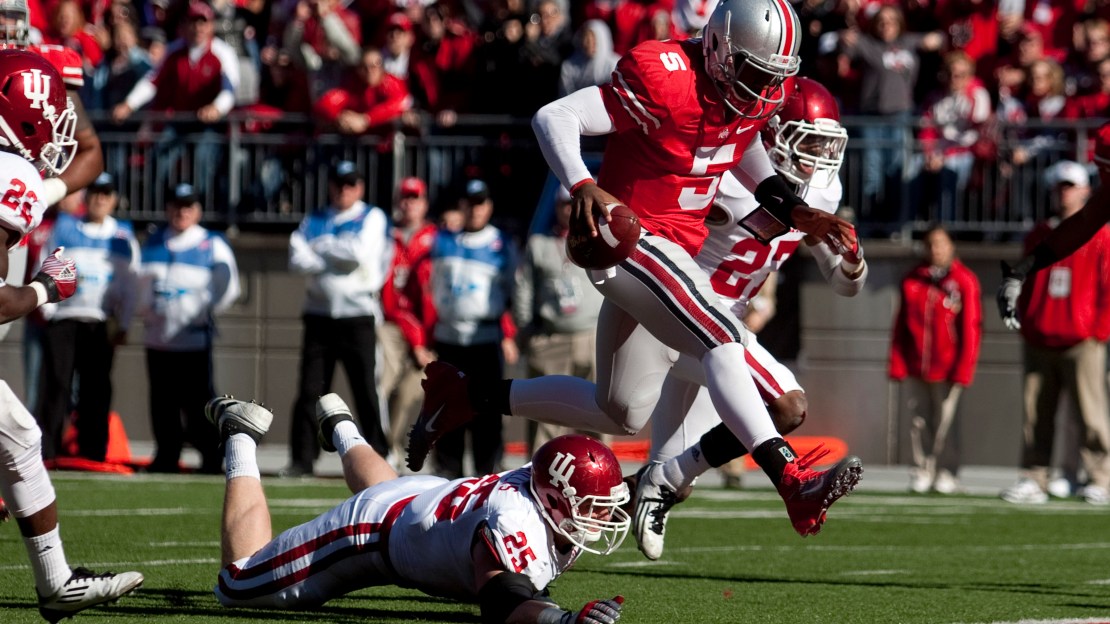 (AP) Braxton Miller ran for two scores including a record 81-yarder and Travis Howard ended Indiana's last chance at tying it with an interception, leading Ohio State to a 34-20 victory on Saturday. The victory was the third in a row for the Buckeyes (6-3, 3-2 Big Ten), but it didn't come easy. Three Buckeyes topped 100 yards rushing: Dan Herron with 141 yards on 14 carries, Carlos Hyde with 105 on 15 and Miller with 105 on 14. It was the first time Ohio State had three runners go over 100 since Scottie Graham, Carlos Snow and Dante Lee did it in 1989 against Northwestern. Read the full AP recap, see the box score and view the Big Ten scoreboard.

FINAL: A one-two punch in the backfield from Braxton Miller and Dan Herron helped Ohio State to a 34-20 victory over Indiana on Saturday at Ohio Stadium. Miller ran for 104 yards and two touchdowns and Herron added 148 yards and one touchdown to pace Ohio State (6-3). Home run plays keyed the Buckeyes' scoring attack. Ohio State had eight plays of 20 yards or more on its way to victory. With 6:12 to go in the first quarter, Miller scrambled for an 81-yard touchdown run, the Buckeyes' longest play on the day. The score cut Indiana's (1-9) lead to 10-7. Ohio State racked up 420 total yards. The Buckeyes' rushing attack contributed 365 yards on 45 carries in addition to Miller's passing effort. The Hoosiers' Tre Roberson passed for 173 yards, completing 11 of 21 throws. He threw one touchdown and one interception. Roberson was also a threat on the ground, as he rushed for 70 yards on 20 attempts. Roberson had a good connection with receiver Kofi Hughes. He caught eight passes for 146 yards and one touchdown. Indiana's offense finished the game having gained 334 yards. In addition to Roberson's efforts through the air, the Hoosiers also rushed 49 times for 161 yards.

FOURTH QUARTER: Ohio State racked up 68 rushing yards in the fourth, and the Buckeyes closed the door on Indiana 34-20. Ohio State ended the game on a 14-point run. The Buckeyes added to their advantage when Carlos Hyde ran two yards to paydirt, the finishing touch on a four-play, 58-yard drive to give Ohio State the lead, 34-20. The Buckeyes' drive was keyed by Hyde's 47-yard run. Ohio State's Hyde reached the 100-yard rushing mark for the game thanks to 63 in the quarter, and ended his day with 116 yards in all.

THIRD QUARTER: Indiana is hanging tough with Ohio State, down 27-20 at the end of the third quarter despite a matchup most presumed to be a blowout. A four-play, 48-yard scoring drive by the Buckeyes snapped the 13-13 deadlock, as Dan Herron pounded in a 15-yard touchdown run. Ohio State started in good field position when the Buckeyes returned a punt. The Hoosiers got even after Tre Roberson and Kofi Hughes hooked up for a 34-yard touchdown to end a seven-play, 64-yard drive that tied the score at 20. Ohio State broke the 20-20 stalemate when Braxton Miller scrambled for a 20-yard touchdown run to polish off an 11-play, 80-yard scoring drive. The Buckeyes threw just one time during that series. Ohio State's Herron hit 100 yards rushing for the game in the quarter, part of his 146-yard rushing performance thus far. Hughes clinched a 100-yard receiving game with 43 yards in the quarter, part of his six-catch, 114-yard day through three quarters for Indiana. The Hoosiers will start the fourth quarter with possession at their own 27-yard line.

SECOND QUARTER: Indiana's Kofi Hughes ran for nine yards and caught two passes for 57 yards in the quarter, and the two teams are tied 13-13 at the end of the second. Ohio State tied things up at 10 when a seven-play, 40-yard drive ended after Drew Basil kicked a 36-yard field goal. The Buckeyes broke the 10-10 tie when Basil made a 45-yard field goal to put a bow on a five-play, 52-yard scoring drive. The key play on Ohio State's drive was Dan Herron's 48-yard run. The Hoosiers tied the game at 13 after Mitch Ewald kicked a 25-yard field goal to end an 11-play, 72-yard drive. Indiana used Tre Roberson's 43-yard pass to Hughes to fuel the drive. The Buckeyes are set to receive to start the second half.

FIRST QUARTER: A potential upset is brewing as Indiana leads Ohio State 10-7 at the end of the first quarter. The Hoosiers took the game's first lead after Mitch Ewald drilled a 35-yard field goal on the last play of an 11-play, 42-yard drive. Indiana made its lead 10-0 when Stephen Houston ran five yards to paydirt on the last play of a six-play, 41-yard drive. A fumble recovery by the Hoosiers set Indiana up to start the drive. The Buckeyes closed the gap to 10-7 when Braxton Miller kept it himself for an 81-yard touchdown run to clinch a 79-yard drive. Ohio State is in a prime position for points on the Hoosiers' 17-yard line to open the second quarter.

The wind is gone from the stadium and Braxton's lungs after that hit by Alexander Webb.

Really don't understand why Ohio State is trying to pass the football.

Blown coverage much? Roberson to Hughes for 34 yards to tie the game.

Boom is over 100 yards for the 6th time in his career.

That's 16 plays of 30 yards or more against IU in six Big Ten games.

RT @CBSSportsOSU: Braxton Miller's 81-yard TD run in the first quarter was the longest by a QB in Ohio State history. http://t.co/YRgrsCaG

When Braxton Miller's passing acumen catches up to his vast running skills–and it will–he will be the top QB in the B1G.

Indiana FR QB Tre Roberson has led scoring drives on 1st poss of each of his 3 starts: FG vs. Ohio State, TDs vs. Iowa, Northwestern.

Much credit to Indiana, Kevin Wilson and this offense. Hoosiers ready to go.

Indiana is leading Ohio State in Columbus. In football.

Not the first time we've seen Ohio State D back on heels against off with little different look. IU quick tempo. OSU needs to adjust

Indiana RB Stephen Houston told me this week that IU wanted to run the ball. 7 of 1st 10 plays were runs, IU leads 3-0.