Iowa Makes It 3 in a Row Over Michigan 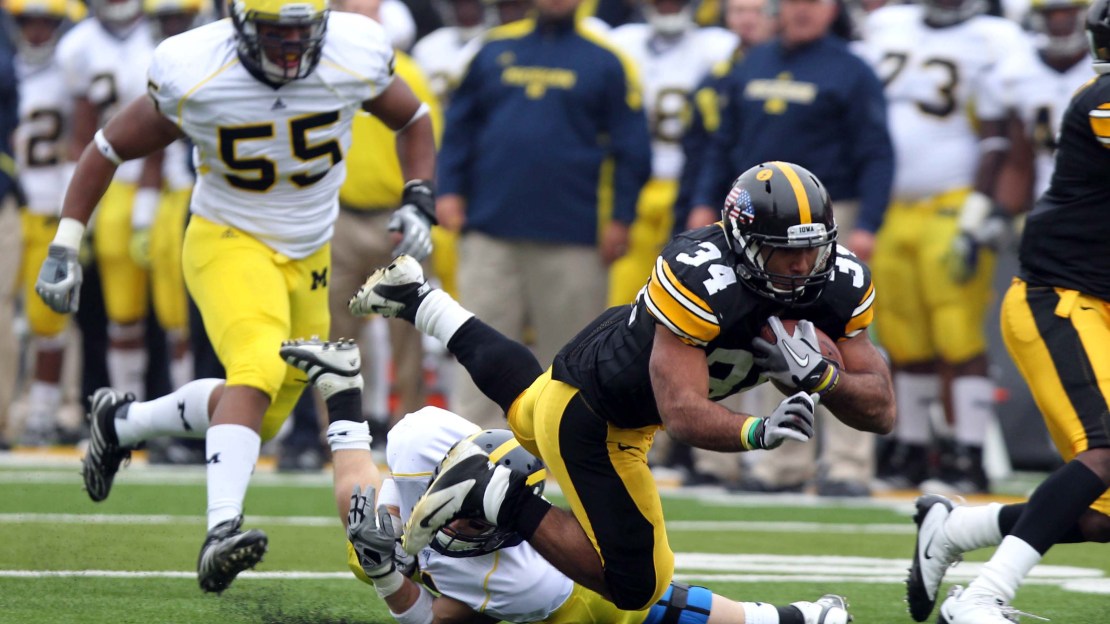 (AP) Marcus Coker ran for 132 yards and a pair of touchdown and Iowa held off a late Michigan rally to beat the 13th-ranked Wolverines 24-16 on Saturday. James Vandenberg added 171 yards passing and a TD for the Hawkeyes (6-3, 3-2 Big Ten), who've won three straight over Michigan for the first time in school history. Michigan drove to Iowa's 3-yard line with 16 seconds left. But Denard Robinson missed on four straight throws, with Iowa's B.J. Lowery breaking up Robinson's final toss to seal the win. Read the full AP recap, see the box score and view the Big Ten scoreboard.

FINAL: Iowa's Marcus Coker is one of the best tailbacks in the Big Ten, and he proved it against No. 13 Michigan on Saturday, carrying the Hawkeyes to a 24-16 victory at Kinnick Stadium. Coker, who came in ranked No. 2 in the conference in rushing yards at 969 on the year, rushed 29 times for 132 yards and two touchdowns. At one point, Michigan (7-2) trailed by 15 points, and while the Wolverines made a run in the game's late stages, they couldn't complete the comeback against Iowa (6-3). The Hawkeyes' explosive offense used big plays to take down Michigan. The Wolverines' defense gave up four plays of at least 20 yards. Iowa added to the highlight reel when James Vandenberg found Keenan Davis open for a 44-yard pass with 12:20 left in the first quarter. The big play set up an eight-play drive that gave the Hawkeyes a 7-0 lead after Coker ran four yards to paydirt. Iowa's Vandenberg was good for 171 yards during the game, completing 14 of 21 passes. Vandenberg tossed one touchdown and no interceptions. Vandenberg had a trusted receiver in Marvin McNutt. He hauled in nine catches for 101 yards. The Hawkeyes racked up 302 total yards. Along with Vandenberg's stats in the passing game, Iowa also added 131 yards rushing on 35 attempts. Michigan's Denard Robinson passed for 194 yards, completing 17 of 37 throws. He tossed two touchdowns and one interception. Robinson was also a threat on the ground, as he rushed for 55 yards on 12 attempts. Robinson looked for Junior Hemingway often. He hauled in five catches for 64 yards. The Wolverines racked up 323 total yards, including 196 yards passing while completing 18 of 38 attempts. Rushing was a key ingredient in Michigan's offensive mix, bringing it 127 yards on 37 carries.

FOURTH QUARTER: Denard Robinson had a productive quarter for Michigan. He threw for 118 yards and one touchdown and ran for 23 yards, but the Wolverines were kept at bay in a 24-16 loss. Iowa made its lead 24-9 when Marcus Coker pounded in a 13-yard touchdown run on the last play of an 11-play, 62-yard drive. Michigan put a bow on a 57-yard drive when Robinson and Kevin Koger combined for a seven-yard touchdown to make the score 24-16. The Hawkeyes' Marvin McNutt reached the 100-yard receiving mark for the game thanks to four catches for 49 yards in the quarter, and ended his day with 101 yards in all. Iowa's Coker rushed for 43 yards in the quarter to put him over 100 yards for the game. Coker finished with 132 yards on the ground.

THIRD QUARTER: In the third quarter, Devin Gardner fought back for Michigan. He threw for zero yards, but the Wolverines have closed the gap to 17-9. Michigan capped off a 45-yard drive when Brendan Gibbons kicked a 32-yard field goal to make the score 17-9. Iowa has possession at its own 49-yard line to start the fourth quarter.

SECOND QUARTER: Iowa stuffed the run, giving up just 16 yards on the ground in the second quarter and the Hawkeyes now lead 17-6. Iowa opened up the lead, 14-6, after James Vandenberg found Brad Herman open for a one-yard touchdown pass to end an 11-play, 78-yard drive. The Hawkeyes made their lead 17-6 when Mike Meyer made a 41-yard field goal on the last play of a four-play, seven-yard drive. Iowa started in good field position at Michigan's 31-yard line when the Hawkeyes recovered a fumble. Iowa is set to receive to start the second half.

FIRST QUARTER: No. 13 Michigan's Fitzgerald Toussaint led the offense in the first quarter. He ran for 39 yards, but the Wolverines trail 7-6 at the end of the first quarter. Iowa got things going through the air in the quarter, passing for 79 yards. The Hawkeyes took the game's first lead after Marcus Coker ran four yards to paydirt on the last play of a six-play, 76-yard drive. The key play on Iowa's drive was James Vandenberg's 44-yard pass to Keenan Davis. Michigan closed the gap to 7-6 when Denard Robinson found Toussaint open for a five-yard touchdown pass to cap a 61-yard drive. The Wolverines will start the second quarter with possession on their own 20-yard line.

Listened to end of Iowa game on xm on way to the stadium. Iowa announcers: I think Kirk Ferentz earned his money today.

First time Iowa has won three straight over Michigan … and #hawkeyes are bowl-eligible.

How is that not a TD? Knee down. In control of the ball.

With a tight end and a fullback, Iowa looks like Iowa again. #hawkeyes

CJF is your TE for the next two years.

Toussaint is a good-looking RB. Explosive.

That TD catch by Fitzgerald Toussaint was his first catch of the season for positive yardage. #wolverines

The more I watch Iowa's Marcus Coker, the more I think he's the best RB in the B1G Ten.

You know it's 11 am in November when Iowa is on your TV — and it looks Iowa cold.