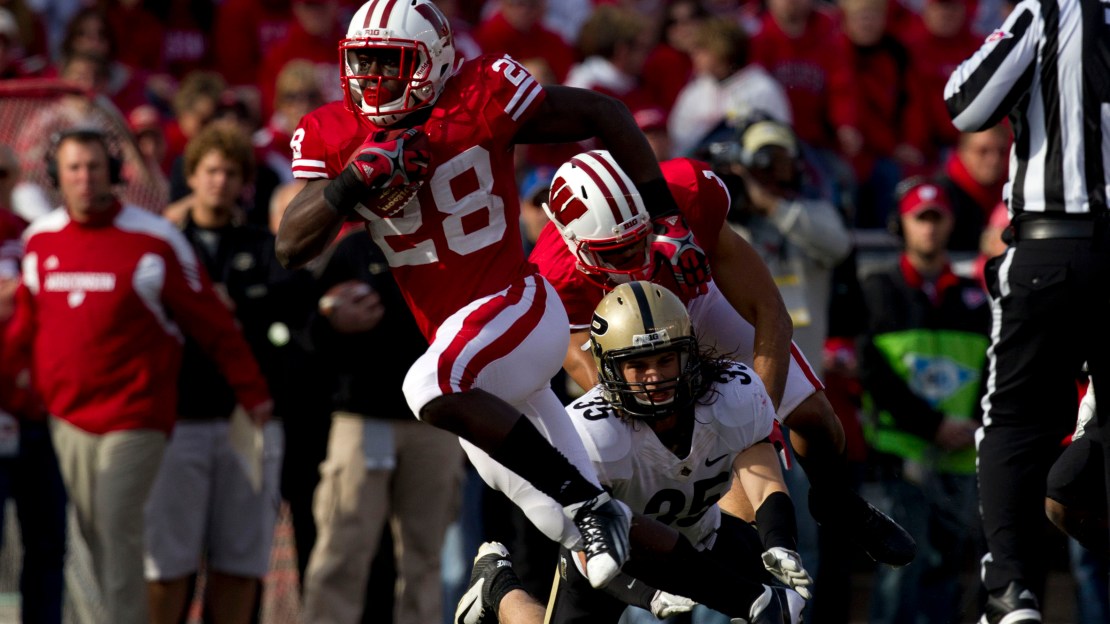 (AP) Montee Ball rushed for a career-high 223 yards with three touchdowns and Wisconsin rebounded from back-to-back losses with a 62-17 rout of Purdue on Saturday. Russell Wilson threw two touchdowns and scored on a scramble for the Badgers (7-2, 3-2 Big Ten). The lopsided victory was a boost to the Badgers after their late collapses at Michigan State and Ohio State the past two weeks. Raheem Mostert had five kickoff returns for 206 yards for the Boilermakers (4-5, 2-3). Wilson was 15 of 20 for 205 yards, and had 76 yards rushing for the Badgers before coach Bret Bielema rested him early in the fourth quarter. Read the full AP recap, see the box score and view the Big Ten scoreboard.

FINAL: One of the best running backs in the Big Ten, No. 18 Wisconsin's Montee Ball ran all over Purdue, carrying Wisconsin (7-2) to a 62-17 victory on Saturday at Camp Randall Stadium. Ball, who came in ranked No. 4 in the conference in rushing yards at 853 on the year, rushed 20 times for 224 yards and three touchdowns. The Badgers' offense dominated, ripping off huge chunks of yardage. Wisconsin had eight plays of 20 yards or more on its way to victory. With 5:06 to go in the first quarter, Russell Wilson found Jeff Duckworth open for a 66-yard pass, the Badgers' biggest gain of the game. Later in the drive, Wilson found Jared Abbrederis open for a five-yard touchdown pass, which gave Wisconsin a 14-7 lead. Wilson threw for 204 yards while going 15-20 for the Badgers. He threw two touchdowns and no interceptions. Wilson also ran for 76 yards on 10 attempts. Wisconsin's offense finished the game having gained 604 yards, including 240 passing yards on 18 completions. The Badgers' rushing attack also contributed 364 yards to the total, with the tally coming on 54 carries. Purdue's (4-5) Caleb TerBush went 10 of 19 through the air for a total of 103 yards. TerBush tossed one touchdown and two interceptions. The Boilermakers racked up 286 total yards, including 166 yards passing while completing 15 of 29 attempts. Purdue also rushed 29 times for 120 yards.

FOURTH QUARTER: Wisconsin completed its blowout of Purdue with a strong fourth quarter and took home a 62-17 victory. The Badgers closed the game on a 27-point run. Wisconsin made its lead 59-17 when James White pounded in a one-yard touchdown run on the last play of a three-play, 25-yard drive. Jared Abbrederis' punt return set the Badgers up to start the drive. Wisconsin opened up the lead, 62-17, after marching down the field for a 12-play, 60-yard drive that ended when Kyle French kicked a 29-yard field goal. The Badgers' Russell Wilson reached the 200-yard passing mark for the game thanks to seven in the quarter, and ended his day with 204 yards in all.

THIRD QUARTER: Wisconsin ran for 68 yards in the quarter, and the Badgers now lead 52-17. Wisconsin stuffed the run, giving up just 13 yards on the ground in the quarter. The Badgers have erupted for 17 straight points. Wisconsin made its lead 45-17 when Montee Ball pounded in a 29-yard touchdown run on the last play of a four-play, 65-yard drive. Ball's 21-yard run took the Badgers from the 35 and across midfield to ignite the drive. Wisconsin opened up the lead, 52-17, after James White ran five yards to paydirt to end a one-play, five-yard drive. The Badgers began the drive with good field position after Chris Borland intercepted Caleb TerBush's pass. Purdue will start the fourth quarter with possession on its own three-yard line.

SECOND QUARTER: Wisconsin put up 24 points in the second, and the Badgers now lead 38-17. Wisconsin finished with 87 yards through the air and 142 on the ground in the quarter. The Badgers had four long plays in the quarter, including Montee Ball's 21-yard run. Wisconsin made its lead 21-10 when Ball pounded in a one-yard touchdown run on the last play of a 10-play, 76-yard drive. From the 47-yard line pushed the Badgers into enemy territory. Wisconsin opened up the lead, 28-10, after marching down the field for a seven-play, 57-yard drive that ended when Russell Wilson took a quarterback draw all the way for a six-yard touchdown run. The Badgers went to the air just one time on that possession. Wisconsin opened up the lead, 35-10, after Ball ran three yards to paydirt to end a seven-play, 87-yard drive. Ball's 22-yard run took the Badgers from the 34 and across midfield to ignite the drive. Purdue closed the gap to 35-17 when Justin Siller turned a handoff into a two-yard touchdown to cap a 75-yard drive. Wisconsin expanded its lead to 38-17 thanks to a four-play, 36-yard drive that ended when Philip Welch kicked a 52-yard field goal. The Badgers' Ball reached the 150-yard rushing mark for the game thanks to 76 in the quarter, and currently sits with 159 yards in all. The Boilermakers will start the second half with the ball.

FIRST QUARTER: No. 18 Wisconsin's high-powered offense resulted in 14 points in the first, and the Badgers lead 14-10 at the end of the first quarter. Wisconsin executed a balanced offensive attack in the quarter, finishing with 98 yards passing and 97 yards rushing. The Badgers scored when Russell Wilson and Jacob Pedersen hooked up for a two-yard touchdown to put the finishing touches on a five-play, 63-yard drive, giving Wisconsin the game's first lead. The Badgers' drive was keyed by Montee Ball's 44-yard run. Purdue tied the score at seven apiece after Caleb TerBush and Crosby Wright combined for a 30-yard touchdown to cap off a two-play, 41-yard drive. The Boilermakers began the drive with good field position after Raheem Mostert's big kickoff return. A six-play, 74-yard scoring drive by Wisconsin snapped the 7-7 standstill, as Wilson found Jared Abbrederis open for a five-yard touchdown pass. The key play on the Badgers' drive was Wilson's 66-yard pass. Purdue closed the gap to 14-10 when Carson Wiggs kicked a 25-yard field goal to clinch an eight-yard drive. The Boilermakers had to settle for a field goal after failing to reach the endzone from Wisconsin's three-yard line. Purdue started in good field position at the Wisconsin 16-yard line when Mostert's big kickoff return. The Badgers have possession on their own 46-yard line to start the second quarter.

Montee Ball has 159 rushing yards so far in the first half. It's most rushing yards he has had in any half in his career #Wisconsin

Craig James, you are the worst.

Boiler up? Yes yes Boiler up.. Beat… The Badgers