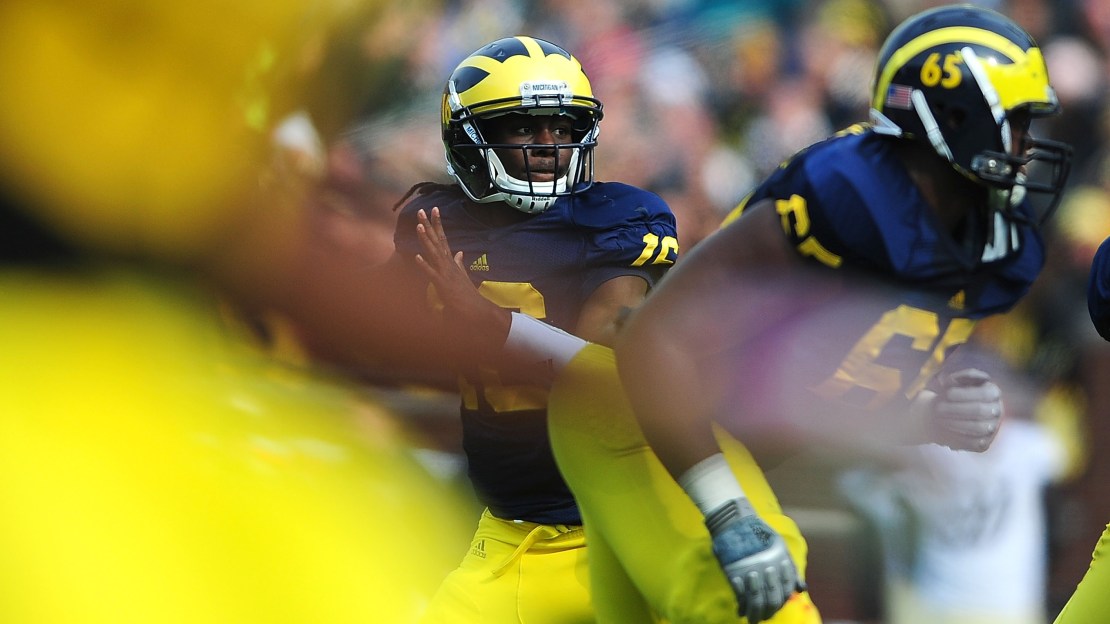 But November starts quietly with an innocuous looking slate of games. The weekend loses more luster with Penn State, the lone Big Ten team unbeaten in league action, off this Saturday. Illinois also is off, which is a good thing for a Fighting Illini squad looking to regroup after losing three games in a row following a 6-0 start.

Michigan?s trip to Iowa is the headliner, but the Wolverines? trip to Iowa City lost much luster when the Hawkeyes got upset last Saturday at Minnesota by a Golden Gopher team that had lost four in a row and was winless in Big Ten action.

Michigan State will look to get back on track after suffering its first Big Ten loss of the season when it welcomes Minnesota.

Like the Spartans, suddenly slumping Wisconsin will try to right itself with a visit from Purdue. On Saturday, the Badgers were stunned at Ohio State, dropping their second game in a row. Can Wisconsin still win the Leaders Division?

Ohio State will look to continue to build mojo by winning a third game in a row when a struggling Indiana squad visits Columbus.

Northwestern ended a five-game losing skein with a 59-38 whipping of Indiana. But now comes a visit to a hot Nebraska team that has won three in a row since a demoralizing loss at Wisconsin and can?t afford another loss if it wants to remain in the thick of the Legends chase. A Wildcat loss would mean Northwestern would need to win its last three games to become bowl-eligible.

BEST GAME: Michigan at Iowa. Coming off a 36-14 domination of Purdue, the Wolverines are still in the thick of the Legends Division race with Nebraska and Michigan State. But many big obstacles remain, including this visit to Iowa. The Hawkeyes may have cost themselves a shot at the Legends title after blowing an 11-point fourth-quarter lead and suffering a 22-21 loss to a Minnesota team that had dropped its previous three league games by an average of 38 points.

BEST MATCHUP: Iowa offense vs. Michigan defense. The Hawkeyes have one of the Big Ten?s better attacks, ranking fifth overall in the conference (402.6 ypg) and fourth in scoring (32.6 ppg). Defense hasn?t been an area of strength in recent seasons, but new Wolverine coach Brady Hoke is trying to change that. He scored a big coup by hiring Greg Mattison from the Baltimore Ravens to run the defense. So far, so good. Michigan is solid, ranking seventh overall in the Big Ten (340.6 ypg) and No. 3 in scoring defense (15.3 ppg).

PLAYER ON THE SPOT: Michigan State QB Kirk Cousins. He needs to rebound after hitting only 11-of-27 passes for 86 yards with no touchdowns and an interception in a 24-3 defeat at Nebraska, which was the Spartans? first Big Ten loss of the season. For the Spartans to win the Legends, he needs to regain his form.

KEEP AN EYE ON: Nebraska?s defense. The unit is coming off one of its top efforts of the season in a 24-3 domination of Michigan State that saw the Huskers limit the Spartans to 187 yards with just 86 coming through the air. Nebraska needs to be dialed in vs. a good Northwestern offense that ranks third in the Big Ten (431.8 ypg) and is coming a 59-point effort at Indiana.

BEST COORDINATOR MATCHUP: Michigan?s Al Borges vs. Iowa?s Norm Parker. Two sage coaches will match schemes in a battle of wits that will go a long way toward determining this key matchup. Parker is famous for his ?bend-but-don?t break? scheme that never really changes, but the Hawkeye defense has struggled much of the season and ranks No. 9 overall (402.3 ypg). Borges is getting better at morphing his West Coast style with quarterback Denard Robinson?s vast skills. The result: An attack the ranks No. 2 in the Big Ten (463.1 ypg).

BEST COACHING MATCHUP: Northwestern?s Pat Fitzgerald vs. Nebraska?s Bo Pelini. Two young coaches (Fitzgerald is 36 and Pelini is 43) who are on the upward slope of their careers. They each share a fire for the profession-and an affinity for defense.

BEST QUARTERBACK MATCHUP: Michigan?s Denard Robinson vs. Iowa?s James Vandenberg. One likes to do his damage on the ground (Robinson), the other prefers traversing through the air. Robinson ranks third in the Big Ten in rushing (111.3 ypg), while Vandenberg is No. 2 in passing (17.5 cpg). Two of the Big Ten?s better signal-callers.