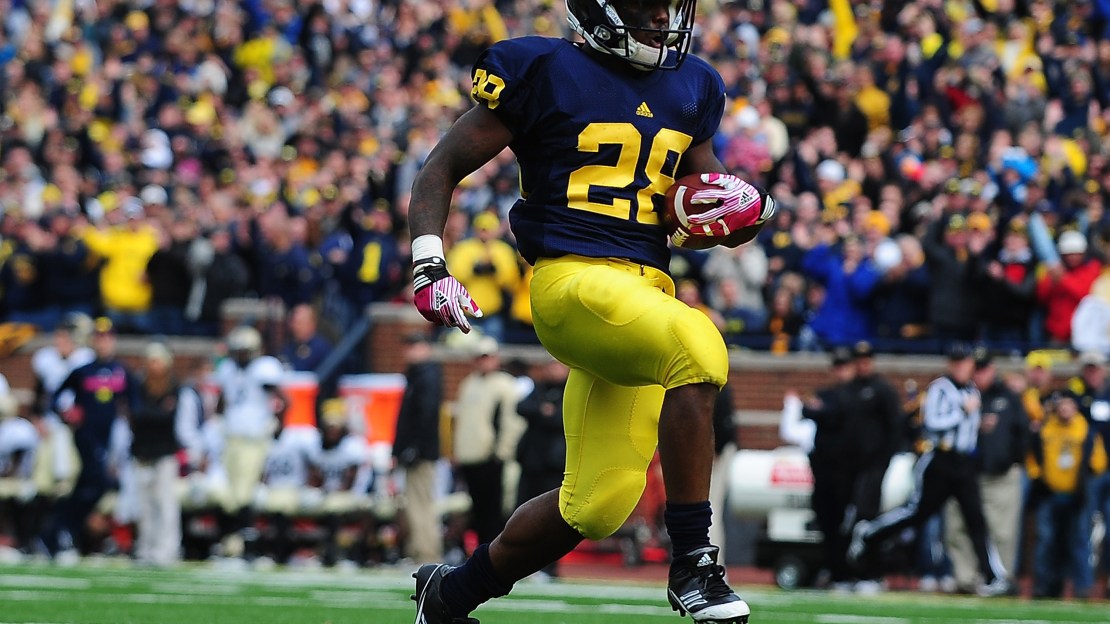 In arguably the biggest weekend this season in the Big Ten, Nebraska announced that it still is in the hunt for the Legends Division title with a dominating win over Michigan State, Minnesota carded its first Big Ten win and Penn State remained perfect in Big Ten play. Following is a look at who was hot and who was not in Week 9 action.

Legends Race. With Nebraska whipping Michigan State, the chase for the Legends title looks wide open. Michigan, Nebraska and Michigan State all are in the running in what will make for a fun run for the crown in November.

Nebraska defense. The unit entered the day ranked No. 8 in the Big Ten (355.7 ypg), but the defense played one of its best games of the season in stifling Michigan State, 24-3. The victory was the Huskers? second in their last 17 vs. Top 10 foes.

Wolverine bounce back. Michigan was off last week after losing its first game of the season, 28-14, at Michigan State. The Spartans had dealt the Wolverines their first loss in each of the last two years, kicking off a second-half swoon each season. But Michigan came off its bye week with a dominating 36-14 win over Purdue to show it has no plans to fold down the stretch.

Northwestern TE Drake Dunsmore. He grabbed seven passes for 114 yards and a school-record four touchdowns to throw his name in the ring for the John Mackey Award as the nation?s top tight end. He also became Northwestern?s all-time leader in receiving yards by a tight end.

Indiana RB Stephen Houston. The Hoosiers had little to cheer about today, but Houston continued to emerge as a rising star with 19 totes for 151 yards and two touchdowns. He entered the game with 403 yards rushing and four touchdowns.

Rex Burkhead. He may be the top running back in the Big Ten after today?s effort vs. Michigan State. Burkhead ran 35 times for 130 yards and two scores. He also caught two passes for 29 yards and a touchdown. Burkhead eclipsed the 100-yard rushing mark for the fifth time in six games.

Northwestern bowl hopes. The Wildcats had lost five games in a row to fall to 2-5, putting in peril the school?s three-year bowl streak. But a 59-38 domination at Indiana kept Northwestern?s bowl dreams alive.

Michigan RB Fitzgerald Toussaint. He entered today?s game vs. Purdue with 318 yards rushing on 62 totes; he ran 20 times for 170 yards and two touchdowns today in a 36-14 win over Purdue. Toussaint may be the No. 1 running back Michigan has been looking for.

Nebraska LB Lavonte David. He notched a team-high 13 tackles and now has 229 in two seasons, a Nebraska record for two-year players.

Joe Paterno. It wasn?t pretty, but it was win No. 409 for JoePa, allowing him to pass Eddie Robinson to become the all-time win king in the Division I ranks with a 10-7 win in the snow over Illinois.

Fantastic finishes. Penn State, Minnesota and Ohio State each scored game-winning touchdowns late to win. The Nits scored with 1:11 left to beat Illinois, the Gophers tallied with 2:48 left to upset Iowa and the Buckeyes scored with 43 seconds left to beat Wisconsin.

Minnesota QB MarQueis Gray. He hit 11-of-17 passes for 193 yards and a touchdown and ran 11 times for 62 yards and the game-winning score in a 22-21 upset of Iowa, helping the Gophers notch their first Big Ten win and end a four-game losing skein. Minnesota had lost its first three league games by an average of 38 points.

Iowa RB Marcus Coker. The big fella toted the rock 32 times for a career-high 252 yards and two touchdowns. Too bad it was for naught, as the Hawkeyes lost at Minnesota, 22-21.

Penn State. The Nittany Lions' 10-7 win over Illinois was their seventh triumph in a row and made Penn State 8-1, keeping the Nits as the only unbeaten team in the Big Ten at 5-0. No one saw this coming, but a tough November looms: Nebraska; at Ohio State at Wisconsin.

Ohio State. After opening 0-2 in the Big Ten, the Buckeye are rolling. First, OSU dumped Illinois. Now, the Buckeyes beat Wisconsin. Just think it the Buckeyes hadn?t blown that game at Nebraska. And OSU only lost 10-7 to Michigan State. The Buckeyes may not lose again, with game remaining vs. Indiana, at Purdue, vs. Penn State and at Michigan.

Underdogs. It was a good day for the ?little? guys, as Minnesota toppled Iowa, Nebraska whipped Michigan State and Ohio State dumped Wisconsin.

Ohio State QB Braxton Miller. It was ugly early on this season for the true freshman, but he?s starting to come of age. Tonight was his best effort yet, hitting 7-of-12 passes for 89 yards, including the game-winning touchdown pass with 43 seconds left.

Michigan State QB Kirk Cousins. A week after throwing for 290 yards and three touchdowns and also chucking a last-second, game-winning Hail Mary pass vs. Wisconsin, Cousins looked pedestrian in a 24-3 loss at Nebraska. Cousins hit just 11-of-27 passes (40.7 percent) for 86 yards with four sacks, no touchdowns and an interception.

Boiler run game. Purdue forged a 7-0 lead over Michigan ? then allowed 36 unanswered points before scoring the final touchdown of the day. An inability to generate a steady ground game hurt the Boilers, who ran 29 times for 89 yards (3.1 ypc). No Purdue player had more than 58 yards rushing–or receiving.

Spartan D: Entering today, the group paced the Big Ten and ranked No. 2 nationally (222.9 ypg), but it looked vulnerable at Nebraska. Michigan State allowed only 270 yards, but 187 came on the ground. With a win, the Spartans could have essentially wrapped up the Legends Division. Now, the race is wide open.

Indiana defense. The ailing unit that entered the game ranked last in the Big Ten (438.6 ypg) was shredded for 616 yards in a 59-38 loss to Northwestern. The Hoosiers had no answer for the Wildcat ground game that generated 315 yards rushing. Indiana has lost six in a row and yielded 40 or more points in four consecutive games for the first time since 2005.

Purdue bowl hopes. The Boilermakers arrived in Ann Arbor riding a wave of momentum, winning two of their last three and thinking bowl. But a 36-14 loss to Michigan leaves Purdue 4-4 overall and 2-2 in the Big Ten. Next up are games at Wisconsin and vs. Ohio State and Iowa before finishing the season at Indiana. Can the Boilers win two of those games to get to their first bowl since 2007?

Iowa K Mike Meyer. He went 0-for-2 on field-goal attempts in a one-point loss to Minnesota that puts the Hawkeyes behind the eight-ball in the Legends Division race.

Illinois special teams. K Derek Dimke?s potential game-tying field goal hit an upright as time expired in a 10-7 loss at Penn State. Earlier in the game, the Illini mishandled a snap on a field-goal attempt and had a punt blocked, continuing a trend of poor special teams play all season for Illinois.

Hawkeye offense. The attacked came into today?s game No. 4 in the Big Ten in scoring (34.3 ppg) but managed just 21 points against a Minnesota defense that was allowing a Big Ten-high 35.9 points per game. Red-zone woes hurt Iowa, which blew a chance to move into a four-way tie in the Legends Division.

Penn State quarterbacks. Matt McGloin hit just 9-of-24 passes for 98 yards with a pick and three sacks, while Rob Bolden went 0-for-4 with a sack. Didn?t matter, as the Nits still found a way to win.

Illinois. The Fighting Illini have now lost three in a row following a 6-0 start. The misery could continue with upcoming games vs. Michigan and Wisconsin, as Illinois has scored an aggregate 28 points during its skid.

Wisconsin?s ground game. The Badgers entered the weekend with the No. 2 rushing attack in the Big Ten (252.1 ypg). But Ohio State stuffed the Badgers time and again, limiting Wisconsin to 104 yards on the ground in a wild 33-29 win that featured four touchdowns in the last 5:28.

Russell Wilson?s Heisman hopes. He still may have been in the running after the loss last week at Michigan State. But his Heisman dreams are over with a second consecutive defeat, even though he posted good numbers in each loss.

Wisconsin pass defense: That?s twice in two weeks that the Badgers have yielded a game-winning touchdown heave in the winning moments.