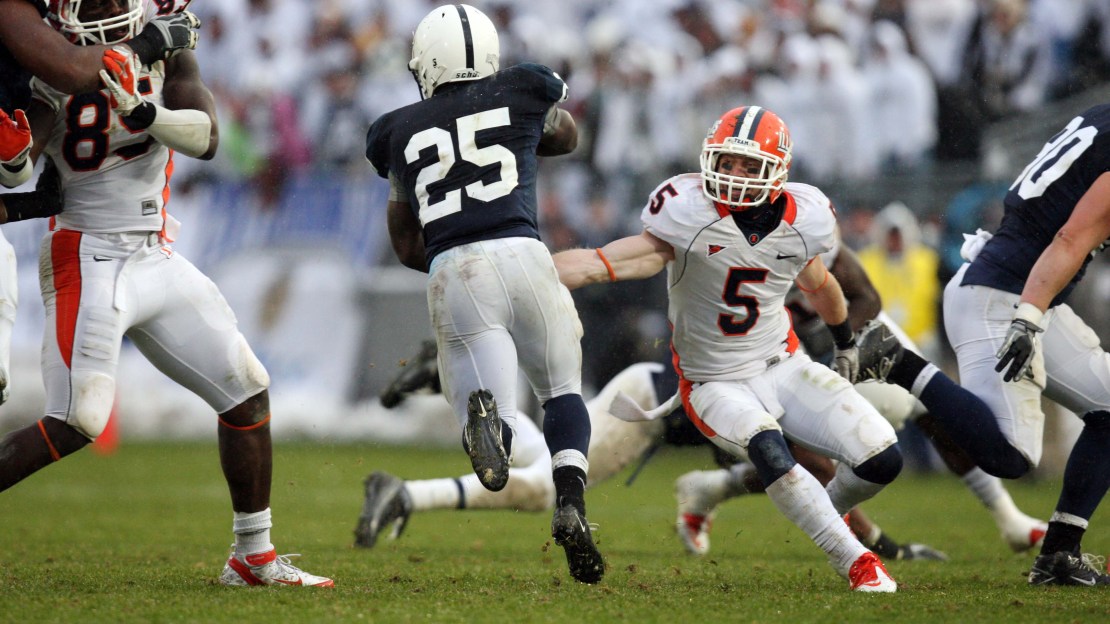 (AP) Joe Paterno broke Eddie Robinson's record for victories by a Division I coach with No. 409 in Penn State's sloppy 10-7 win against Illinois on Saturday. The 21st-ranked Nittany Lions (8-1, 5-0 Big Ten) overcame six fumbles with Silas Redd's 3-yard touchdown run with 1:08 to go. Illinois (6-3, 2-3) drove the Penn State 25, but Derek Dimke's 42-yard field goal attempt bounced off the right upright as time expired. Redd had a career-high 30 carries for 137 yards for Penn State, none bigger than his late run set up after Illinois corner Justin Green was whistled for pass interference after breaking up a fourth-down pass for Derek Moye in the end zone. Read the full AP recap, see the box score and check out the Big Ten scoreboard.

FINAL: No. 19 Penn State took the lead in the fourth quarter and hung on for a 10-7 victory over Illinois on Saturday at Beaver Stadium. With 1:08 to go, Silas Redd pounded in a three-yard touchdown run to give Penn State (8-1) a 10-7 lead. The game was a defensive struggle, with both teams scrambling to put points on the board. The squads totaled a mere 17 points and in the contest. The Nittany Lions' defense was stifling as they shut down Penn State's offensive attack. The Nittany Lions' defense allowed just 286 total yards as it frustrated Illinois' (6-3) offense. Penn State racked up 208 total yards, including 94 yards passing while completing 10 of 29 attempts. The Nittany Lions' rushing attack also contributed 114 yards to the total, with the tally coming on 40 carries. The Fighting Illini's Nathan Scheelhaase passed for 61 yards, completing nine of 16 throws. He tossed one touchdown and no interceptions. Scheelhaase was also a threat on the ground, as he rushed for 99 yards on 15 attempts. Scheelhaase had a good connection with receiver A.J. Jenkins. He hauled in six catches for 41 yards.

FOURTH QUARTER: Penn State captured the lead in the fourth quarter and hung on for the 10-7 win over Illinois. With 1:08 to go, Silas Redd turned a handoff into a three-yard touchdown to give the Nittany Lions the lead, 10-7. Penn State closed the game on a 10-point run. An 18-yard drive that ended when Anthony Fera kicked a 30-yard field goal helped the Nittany Lions narrow the deficit to 7-3. Penn State began the drive with good field position at the Illinois 31-yard line after Brad Bars blocked a punt. Redd's three-yard touchdown run gave the Nittany Lions the lead for good, 10-7, after a 10-play, 80-yard drive.

THIRD QUARTER: Nathan Scheelhaase led Illinois in the quarter. He threw for 23 yards and one touchdown and ran for 22 yards, and the Fighting Illini now lead 7-0. Illinois scored when Scheelhaase threw a 10-yard touchdown pass to Spencer Harris to clinch an 11-play, 64-yard drive, giving the Fighting Illini the game's first lead. Illinois threw just two times on that possession. Penn State's Silas Redd reached the 100-yard rushing mark for the game thanks to 35 in the quarter, and currently sits with 109 yards in all. The Nittany Lions have the ball at midfield to begin the fourth quarter.

SECOND QUARTER: The teams combined for no points and three turnovers in an ugly second quarter and the game is tied 0-0. Illinois will receive to start the second half.

FIRST QUARTER: The first quarter saw both teams combine for no points and one turnover and the game is tied 0-0 at the end of the first quarter. Illinois has possession on its own 35-yard line to start the second quarter.

This marks the first scoreless first half (both teams) in a Penn State football game since a 0-6 Nittany Lion loss at Alabama in 1984.

I ain't feeling this QB rotation

I honestly cant stand watching this 2 qb system..bolden has no awareness! Please play mcgloin and keep him in!

Stop the presses, Illini pick up first first down with 640 left in half.

PSU is going to win this game with Silas Redd, not the passing game. 14 pass attempts so far make no sense.

Pic from field. Snow is still coming down but not as heavy as before pic.twitter.com/LD0YB1og

McGloin's not wearing long sleeves. This is Scranton weather.