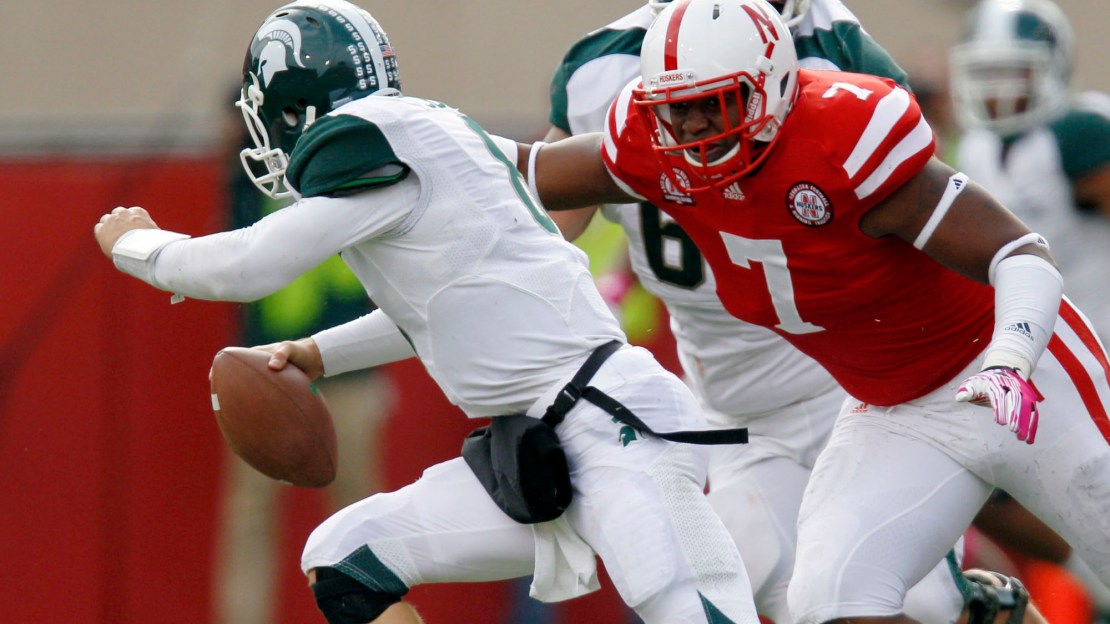 (AP) Rex Burkhead scored three touchdowns and ran for 130 yards on 35 carries, and No. 13 Nebraska defeated ninth-ranked Michigan State 24-3 Saturday to take control of the Big Ten Legends Division. Burkhead, who went over 100 yards for the fifth time in six games, scored at the end of 80- and 89-yard drives in the third quarter to put Nebraska up 24-3. Taylor Martinez completed 6 of 7 passes for 80 yards in the third quarter after going 1 for 6 in the first half. Michigan State (6-2, 3-1), coming off the incredible finish to its win over Wisconsin last week, managed just 187 yards against Nebraska's improving defense. Kirk Cousins was 11 of 27 for 86 yards, with an interception that set up the Huskers' first score. Read the full AP recap, see the box score and check out our Big Ten scoreboard.

FINAL: One of the best running backs in the Big Ten, No. 13 Nebraska's Rex Burkhead ran all over No. 11 Michigan State, leading Nebraska (7-1) to a 24-3 victory on Saturday at Memorial Stadium. Burkhead, who came in ranked No. 4 in the conference in rushing yards at 752 on the year, rushed 34 times for 127 yards and two touchdowns. The Cornhuskers did not allow Michigan State's (6-2) offense to get going throughout the contest. Nebraska's defensive unit stood firm against the Spartans' offense, holding Michigan State to 187 total yards. Le'Veon Bell did his best to carry the Spartans' offense, turning 12 carries into 58 rushing yards. The Cornhuskers' Taylor Martinez passed for 83 yards, completing eight of 14 throws. He tossed one touchdown and one interception. Martinez was also a threat on the ground, as he rushed for 22 yards on 12 attempts. Nebraska racked up 270 total yards. The Cornhuskers' rushing attack contributed 187 yards on 57 carries in addition to Martinez's passing effort.

FOURTH QUARTER: The two teams combined for more punts than points in a slow fourth quarter and Nebraska kept the game out of reach for a 24-3 victory over Michigan State. There were one punts in the quarter as neither team could find a way to move the ball.

THIRD QUARTER: Nebraska's high-powered offense resulted in 14 points in the third, and the Cornhuskers now lead 24-3. Nebraska threw for 83 yards and ran for 76 yards in the quarter. The Cornhuskers' defense held tough in the quarter, holding Michigan State to 29 total yards of offense. Nebraska expanded its lead to 17-3 thanks to a 13-play, 80-yard drive that ended when Rex Burkhead pounded in a one-yard touchdown run. The Cornhuskers made their lead 24-3 when Taylor Martinez and Burkhead combined for a 27-yard touchdown on the last play of an 11-play, 89-yard drive. Nebraska threw just three times during that march downfield. The Cornhuskers' Burkhead rushed for 62 yards in the quarter to put him over 100 yards for the game. Burkhead has 111 total yards on the ground so far today. The Spartans have possession on their own 38-yard line to start the fourth quarter.

SECOND QUARTER: Nebraska's defense shut down Michigan State's aerial attack in the second quarter, holding the Spartans to 20 passing yards and the Cornhuskers now lead 10-3. A 17-yard drive that ended when Dan Conroy drilled a 28-yard field goal helped Michigan State narrow the deficit to 10-3. The Spartans began the drive with good field position at Nebraska's 28-yard line after Johnny Adams intercepted a Taylor Martinez pass. The Cornhuskers will start the second half with the ball.

FIRST QUARTER: No. 13 Nebraska held No. 11 Michigan State to seven yards through the air during the first quarter and the Cornhuskers lead 10-0 at the end of the first quarter. Nebraska got on the scoreboard first, rattling off a seven-play, 25-yard drive that ended in a score when Rex Burkhead pounded in a one-yard touchdown run. Lance Thorell's interception of a Kirk Cousins pass set the Cornhuskers up to start the drive. The rushing attack provided every yard for Nebraska during that series. The Cornhuskers made their lead 10-0 when Brett Maher kicked a 19-yard field goal on the last play of a six-play, 38-yard drive. Nebraska's drive was keyed by Tim Marlowe's 39-yard run. The Cornhuskers had to settle for a field goal after failing to reach the endzone from the Spartans' one-yard line. Nebraska's punt return set the Cornhuskers up at Michigan State's 40-yard line to start the drive. Nebraska kept the ball on the ground during the drive, throwing only one pass. The Cornhuskers will start the second quarter with the ball at their own 33-yard line.

See some of the Michigan State-Nebraska tweets:

Thank you lord for this BEAUTIFUL WIN #HUSKERNATION

The Spartans have scored just 16 points in their 2 losses this season.

Lots of credit to huskers. But lets be honest. Sparty has been brutal. Tough to get up this many times in a row.

I love Cousins, but he'll go down as a very good, but not great, MSU QB because off-field composure doesn't translate on field.

Is anyone really surprised by this Michigan St performance? Coming off 2 huge home wins, plus — it's Mich St. Annual Halloween tradition.

Michigan State's game plan is… interesting. Cousins has tried to chuck it down the field several times into double, triple coverage.

@BTNBrentYarina Just call them the MSU Chicago Bears. If their special teams and D dont score for them they are in trouble

The Blackshirts are back.

Is Cousins aware that the receivers he targets do NOT have to be covered like a blanket? #MSU

Memo to Kirk Cousins: You might want to stop throwing at Dennard

This game has started off terribly for Michigan State … but still not as bad as last week against Wisconsin. And we know how that ended.

And people say Taylor Martinez can't run the option? On NCAA 2011, that would have been a fumble. #huskers

This Michigan State defense hasn't seen a running attack like Nebraska. They looked off balanced on the first drive.