Michigan Runs All Over Purdue 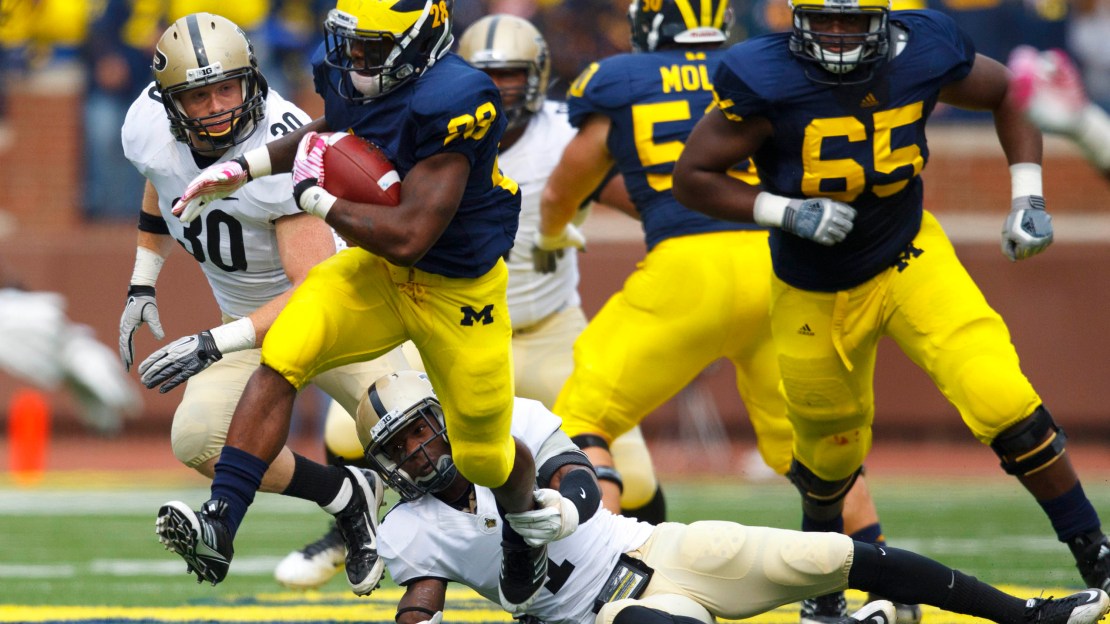 (AP) Fitzgerald Toussaint ran for a career-high 170 yards and tied a career high with two touchdowns, leading No. 17 Michigan to a 36-14 win over Purdue on Saturday. The Wolverines (7-1, 3-1 Big Ten) gave up a TD on the opening drive of the game, then scored 36 straight points to bounce back from their first loss of the season, two weeks ago at Michigan State. The Boilermakers (4-4, 2-2) haven't won or lost consecutive games this year. Toussaint had 155 yards rushing through three quarters, helping Michigan find a rusher to take some of the load from quarterback Denard Robinson. Read the full AP recap, see the box score and check out our Big Ten scoreboard.

FINAL: Fitzgerald Toussaint broke out against Purdue, piling up 170 rushing yards and scoring two touchdowns to lead No. 16 Michigan to a 36-14 victory on Saturday at Michigan Stadium. Home run plays keyed Michigan's (7-1) scoring attack. Purdue's (4-4) defense gave up seven plays of at least 20 yards. With 3:14 to go in the third quarter, Toussaint ran 59 yards to paydirt, the Wolverines' longest play on the day. The touchdown gave Michigan a 29-7 lead.

Denard Robinson threw for 170 yards while going 9-14 for the Wolverines. He threw one interception. Robinson also ran for 63 yards on 15 attempts. Michigan racked up 535 total yards, including 196 yards passing while completing 10 of 17 attempts. The Wolverines' rushing attack also contributed 339 yards to the total, with the tally coming on 53 carries. Robert Marve threw for 66 yards while completing eight of 14 passes for the Boilermakers. Marve tossed one touchdown and one interception. Marve looked for Justin Siller often. He hauled in five catches for 58 yards. Purdue's offense finished the game having gained 311 yards, including 222 passing yards on 17 completions. The Boilermakers struggled to move the ball on the ground, earning 89 yards on 29 attempts.

FOURTH QUARTER: Thanks to a mean rushing attack, Michigan kept the game out of reach for a 36-14 victory over Purdue. The Wolverines rushed for 105 yards in the quarter. The Wolverines made their lead 36-7 when Michael Shaw ran 37 yards to paydirt on the last play of a seven-play, 86-yard drive. The Boilermakers made the score 36-14 after Robert Marve and O.J. Ross combined for a 19-yard touchdown to finish off a 48-yard drive. Purdue started in good field position when Waynelle Gravesande returned a punt.

THIRD QUARTER: Michigan picked up 96 yards in the ground game during the third quarter, and the Wolverines now lead 29-7. Michigan sniffed out Purdue's rushing attack in the quarter, holding the Boilermakers to 16 rush yards. The Wolverines have scored the last 29 points. Michigan opened up the lead, 29-7, after Fitzgerald Toussaint pounded in a 59-yard touchdown run to end a four-play, 80-yard drive. The Wolverines' Toussaint topped 150 yards rushing for the game in the quarter, and has plenty of time to add to his 155 total yards on the ground. Michigan has possession on its own 20-yard line to start the fourth quarter.

SECOND QUARTER: Michigan's offense looked sharp in the second quarter, scoring 15 points, and the Wolverines now lead 22-7. Michigan racked up 100 passing yards and 99 rushing yards in the quarter. The Wolverines have scored 22 unanswered points. Michigan stuffed Caleb TerBush in the endzone for a safety to make the score 9-7. The Wolverines opened up the lead, 12-7, after Brendan Gibbons kicked a 37-yard field goal to end a five-play, 40-yard drive. Michigan added to its advantage when Fitzgerald Toussaint ran two yards to paydirt, the last of a five-play, 83-yard drive to give the Wolverines the lead, 19-7. Michigan used Denard Robinson's 42-yard pass to Jeremy Gallon to fuel the drive. The Wolverines made their lead 22-7 when Gibbons drilled a 22-yard field goal on the last play of an 11-play, 47-yard drive. Robinson's 28-yard run from the 48-yard line pushed Michigan into enemy territory. The Wolverines squandered an opportunity to score a touchdown, missing a chance to score from Purdue's one-yard line before settling for the field goal. Michigan will get the ball to start the second half.

FIRST QUARTER: Purdue's Gary Bush caught a 48-yard touchdown pass in the quarter, and the two teams are tied 7-7 at the end of the first. The Boilermakers struck first when Caleb TerBush threw a 48-yard touchdown pass to Bush, the final play of a five-play, 67-yard drive. No. 16 Michigan tied the game at seven after Denard Robinson kept it himself for a two-yard touchdown run to end a 10-play, 70-yard drive. The Wolverines will start the second quarter with possession on their own 12-yard line.

See some of the best in-game tweets:

Since #Purdue scored on 1st drive, #Boilermakers have been outgained 294-52.

I bet you don't need even one hand to count the number of times a Rodriguez-coached team had a safety and field goal in the same game.

Denard Robinson just threw interception number 645 on the season. Has to be more careful with the ball.