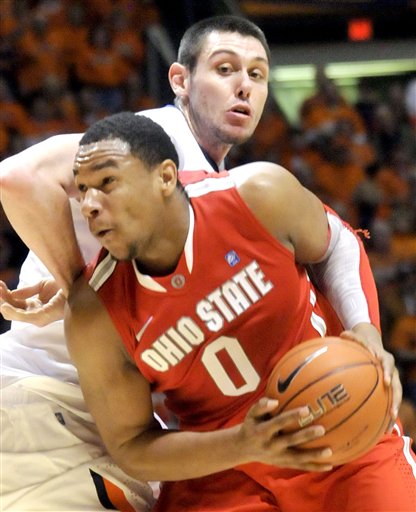 This just in from the Big Ten Basketball Media Day: Defending Big Ten Champion Ohio State has been chosen as the conference favorite heading into the 2011-12 season, as voted on by a panel of Big Ten media. The media also tabbed Buckeye sophomore Jared Sullinger as the Preseason Player of the Year. Wisconsin and Michigan State were selected to finish second and third, respectively. Joining Sullinger on the Preseason All-Big Ten team are Michigan State?s Draymond Green, Minnesota?s Trevor Mbakwe, Purdue?s Robbie Hummel and Wisconsin?s Jordan Taylor.

Ohio State returns two starters after compiling a 34-3 overall record and claiming the Big Ten regular season and tournament titles a season ago. The Buckeyes earned their 13th outright conference crown, marking the most of any Big Ten team, en route to the No. 1 overall seed in the NCAA Tournament. Eighth-year head coach Thad Matta has led Ohio State to seven consecutive 20-plus-win seasons.

After earning All-America status, Big Ten and national Freshman of the Year accolades, Sullinger adds Preseason Big Ten Player of the Year to his list of honors. The Buckeye forward averaged 17.2 points and 10.2 rebounds in his first season in Columbus. Along with earning Blue Ribbon Yearbook Preseason All-America honors, Sullinger is one of nine Big Ten players on the Wooden Award Preseason Top 50 list.

Wisconsin welcomes back two starters to its lineup after earning its 13th consecutive NCAA Tournament berth last season. The Badgers advanced to the Sweet 16, finishing the season with a 25-9 overall record. Taylor, a Blue Ribbon Yearbook Preseason All-American and Preseason Wooden Award candidate, returns to lead Wisconsin after posting 18.1 points, 4.7 assists and 4.1 rebounds per game a season ago.

Michigan State returns two starters from a team that made the NCAA Tournament for the 14th straight season last year. A Preseason Wooden Award candidate, Green leads the Spartans into the 2011-12 campaign after posting 12.6 points, 8.6 rebounds and 4.1 assists per game last season en route to All-Big Ten honors.

The complete 2011 Preseason All-Big Ten Team and preseason poll can be found below.