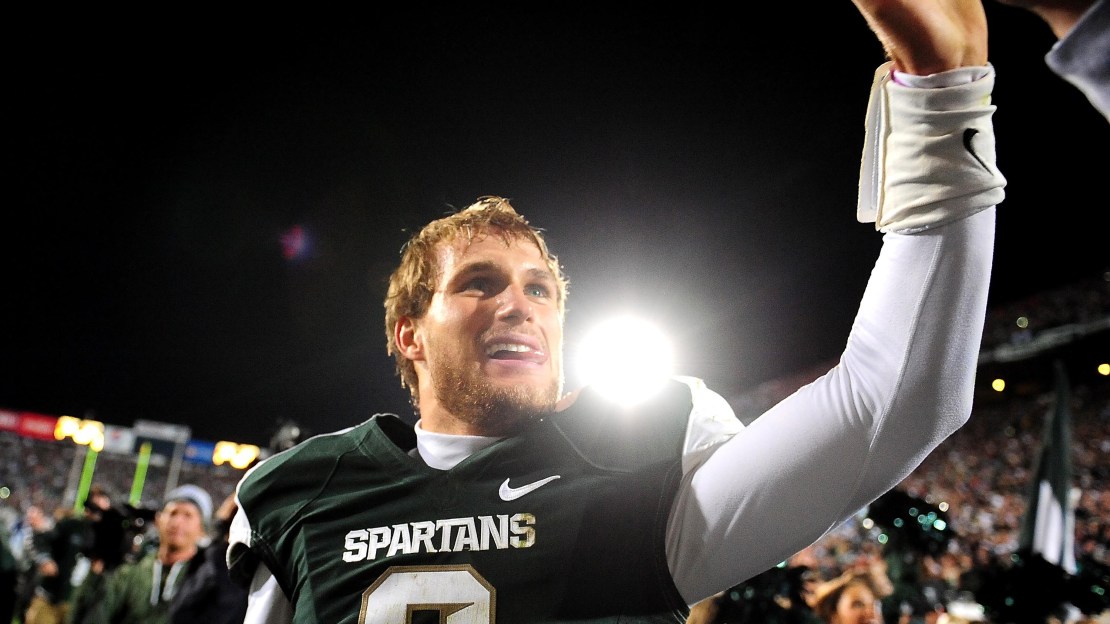 Michigan State quarterback Kirk Cousins has a sense for history. He knows his 44-yard desperation touchdown heave to Keith Nichol with four seconds hanging on the clock was an instant classic. The epic play that knocked off an unbeaten and top-10 ranked Wisconsin team will go down in Big Ten lore. And the play will loom even bigger among Michigan State fans if Cousins and the 2011 Spartans are able to deliver the school its first trip the Rose Bowl since the 1988 season. I caught up with Cousins earlier this week to get his thoughts on his epic pass-as well as a few other subjects.

Q: How often have you been asked about the play?
A: I have been asked a few times. But it?s not getting too old. It was a special moment.

Q: How does it compare to the fake field goal that Michigan State executed to beat Notre Dame in dramatic fashion last season?
A: They are very similar in that they were night games, big atmospheres, big-time team we were playing, the improbability of the play actually working. But at the same time, there are some differences.

The game wasn?t on the line with the Hail Mary. We would have gone into overtime if it was incomplete. With the ?Little Giants? play (fake field-goal play vs. Notre Dame in 2010), it was make or break. If we don?t complete that, we lose.

And Notre Dame, it was early in the year, it was hard to tell how good they were gonna be. They already had one loss. But this Wisconsin team was unbeaten and ranked sixth in the country.

So, there are some differences there, but certainly the pandemonium after the result of both was very similar.

Q: When you got the play, did you think it would work?
A: We work on it a lot. We spend a lot of time with it. And because of the lack of time on the clock, we had to run it. We had no choice. We had to throw it to the end zone, and Wisconsin knew that as well.

I think it?s more than just the play itself. I think it?s the people you have running it who make it special. And I think the size we have at receiver and the jumping ability and good hands that we have. ? I thought we had a decent chance, thought we had a chance to go up and get it. I didn?t think it would be on the rebound, but I thought on the initial catch we may have a chance to come up with it. So my goal was to make sure to I gave (Nichol) a chance to put it into the end zone and get enough air underneath the ball so they could come down with it.

Q: How often do you practice the play?
A: We usually practice on air (against no defense). So, we complete it every time. Typically, if you have a defense there, it?s unlikely (you will complete it). But it?s always one of those plays where both sides hold their breath because even the defense knows the potential of the offense to catch it. So there are concerns on both sides when a play like that happens. We were fortunate to be the ones who came out on top of this one.

Q: The offense seems to be clicking. But is there anything the attack needs work on?
A: We have three talented running backs, a lot of skill at receiver and tight end. You could say our line was a concern going into the year, but because of the amount of big games they?ve played in and the experience they?ve gained, we are starting to really come together there which has been a great deal. And they?ve done a great job protecting me.

Honestly, I think it?s more about simply executing to be as sharp as we can and protecting the football. I think turnovers cost us to some degree the past two weeks and we need to have greater ball security so we don?t get into negative situations.

Q: What would it mean to get to the Rose Bowl?
A: That would mean more than anything I could accomplish here. We won a Big Ten championship last year. To go to the Rose Bowl would be very, very special. That is where we set our sights on dating back to last January. That?s always the focus around here and for every other Big Ten team. And that?s why it would be so special.

Q: You made an impact on many before your big pass last week back at Big Ten media days with a speech you gave at the luncheon. Were you surprised at the impact of your talk?
A: I was surprised by how far it went and how much feedback I received. It was amazing to see old friends who I hadn?t spoken to in a while since I had moved out of the Chicago area who got back in touch and communicated with me that they had seen or heard the speech. I was very thankful for the opportunity to give the speech and was thankful for the way it all turned out. I was definitely surprised by the overall response.