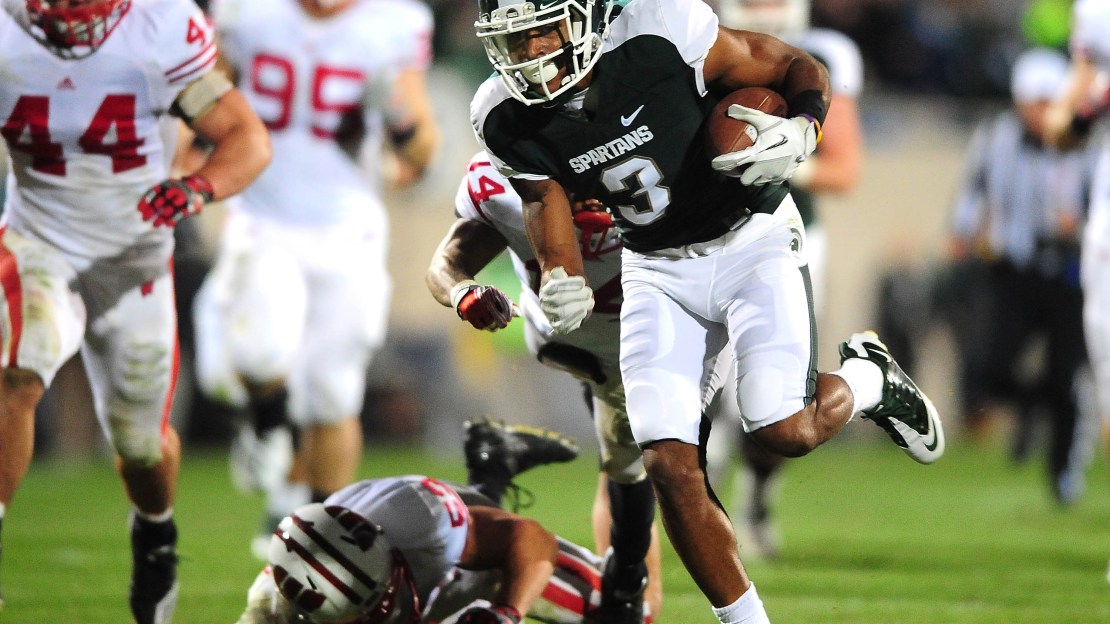 The stretch drive of the season is entering a higher gear with two big matchups on tap in what looks like the best collection of games yet in 2011. The headliner is Michigan State at Nebraska in a key game that will determine pecking order in the Legends Division. The other tilt to watch is a big Leaders Division battle between Wisconsin at Ohio State. The Buckeyes are coming off an off week rested, ready and perhaps with a few new wrinkles. How will the Badgers respond coming off their first loss of the season? Come tell me in the comments box below, or drop me a note in my BTN.com mailbag.

Illinois will look to end a two-game skid at Penn State, which is one of the most surprising 7-1 teams in the nation. A suddenly hot Purdue team travels to Michigan, which didn?t play last week after losing to Michigan State. The Boilermakers are battling for their bowl life, while the Wolverines are looking to maintain their surprising contender status in the Legends race. Find the full Week 9 schedule of Big Ten games on our BTN.com scoreboard.

Iowa goes to Minnesota to battle for Floyd of Rosedale, a bronze pig that?s the coolest trophy in college football. The Gophers won the bauble last season but will face a hot Hawkeye team that has won two in a row. Northwestern plays at Indiana, meaning one of these two winless Big Ten teams finally will taste league victory. The Wildcats have won the last four meetings, but Kevin Wilson would love to notch his first conference victory against his old employer.

MY BEST GAME
All eyes will be on Lincoln, Neb., where the Cornhuskers will play host to Michigan State in a huge Legends Division matchup. The Spartans have stamped themselves the Big Ten favorite following an iconic victory at home over Wisconsin last Saturday night. Michigan State (6-1 overall, 3-0 Big Ten) will wade into Nebraska (6-1, 2-1) as one of just two league teams that are unbeaten in Big Ten action (Penn State is the other). The victor looks to be the favorite to advance to Indianapolis for the inaugural conference championship game. But know this: The game is more of a must-win for Nebraska, as it has no wiggle room left after already having lost at Wisconsin.

MY BEST MATCHUP
Michigan State defensive line vs. Nebraska offensive line. This, ladies and gentlemen, is power on power, the immovable object vs. the irresistible force. Something has to give in this battle of might, right? The Spartans are No. 1 in the Big Ten in rush defense; the Cornhuskers are No. 1 in rush offense. Be sure to pay attention when Husker center Mike Caputo is lined up against Michigan State tackle Jerel Worthy.

MY PLAYER ON THE SPOT
Ohio State QB Braxton Miller. If the Buckeyes hope to avenge last season?s loss at Wisconsin, Miller will have to play well. To be kind, the true freshman is a work in progress, completing just 50 percent of his passes for 403 yards with five touchdowns and two interceptions. The last time out, Miller completed just one of four passes-but it went for a touchdown in a big win at Illinois. Miller has to be more efficient through the air so the Badgers can?t gang up and stop a strong Ohio State ground game.

I SAY KEEP AN EYE ON …
Illinois? offense. The unit has struggled the last two weeks, scoring an aggregate 21 points in consecutive losses to Ohio State and Purdue. The bad news for the Fighting Illini attack: It will play a rugged Nittany Lion squad that ranks second in the Big Ten in total defense. To win for a second year in a row at Penn State, Illinois will need to find a way to establish a ground game with running backs Jason Ford, Donovonn Young and Troy Pollard along with nimble quarterback Nathan Scheelhaase. The ground game has bogged down the last two weeks, notching 121 yards rushing at Purdue and 116 vs. Ohio State. The Nits are yielding just 101.9 yards per game on the ground.

MY BEST COORDINATOR MATCHUP
Ohio State defensive coordinator Jim Heacock vs. Wisconsin offensive coordinator Paul Chryst. Ohio State is having its struggles this season, but not on the defensive side of the ball. Heacock, who has been on the Buckeye sideline for 15 years, is a sage mind who will have had an extra week to prep for the Badgers. Will he have any new looks? Chryst may be the hottest coordinator in college football, primed to be a head coach soon. In recent years, he has complemented Wisconsin?s trademark punishing ground game with a sophisticated passing game to give the Badgers one of the most dynamic, balanced and deadly attacks in the nation.

MY BEST COACHING MATCHUP
Michigan State?s Mark Dantonio vs. Nebraska?s Bo Pelini. Both are nail-tough, defensive-minded coaches who give no quarter. Pelini?s defense isn?t on par with Dantonio?s, but it will be fun to watch them match wits and Xs and Os in this Titanic Legends Division clash.

MY BEST QUARTERBACK MATCHUP
Nebraska?s Taylor Martinez vs. Michigan State?s Kirk Cousins. Each goes about their business in different ways, with Martinez being more deadly traveling by land and Cousins opting to do most of his damage through the air. Whichever signal-caller can impose his will and style of play figures to lead his squad to victory.