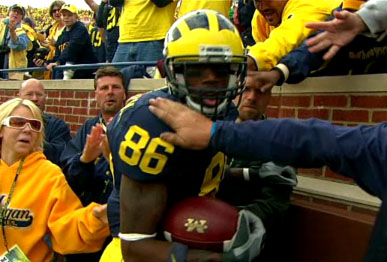 So you think the Big Ten is all about running the ball and defense, huh? Think again. As the sport has evolved and become a passing game recently, the Big Ten has done its part and produced some of the game?s top wide receivers. The 2000s is no exception. The decade featured some of the elite receivers in Big Ten annals, both from a talent and numbers perspective. Michigan State?s Charles Rogers and Michigan?s Braylon Edwards both won the Biletnikoff Award, while Purdue?s Taylor Stubblefield finished his career as the NCAA?s all-time leading receiver (325 catches). Watch a clip from Tuesday's show now and see the entire top 10 list in this post.

Braylon Edwards, MICHIGAN
-Finished career with 3,541 yards and 39 TD
-Set Michigan season records for receptions (97) and yards (1,330) as a senior
-Holds career records for 252 receptions, 3,541 yards and 39 touchdowns,a Big Ten record.
-Only wide receiver in Big Ten history and the third in NCAA Division I-A annals to gain 1,000 or more receiving yards in three consecutive years.
-Holds the Michigan record for the most games with 100 or more receiving yards (17)
-Won the Fred Biletnikoff Award, given to the nation's top wide receiver
-Tied record for most TD catches in a Rose Bowl game, with three in 2005 game

Taylor Stubblefield, PURDUE
-Finished career with 3,629 yards, 21 TD
-Ranks as the all-time NCAA receptions leader (325)
-First player to lead the conference in receptions two seasons in a row since Ohio State?s David Boston (1998)
-As a junior, led Big Ten in receptions (86), totaled 835 yards and three touchdowns; as a senior, caught a Big Ten-leading 89 passes for 1,095 yards and 16 touchdowns
-Tied a Sun Bowl record with 9 receptions, set records with 196 receiving yards and 244 all-purpose yards in 2001 game

Charles Rogers, MICHIGAN STATE
-Finished career with 2,821 yards, 27 TD
-Broke Randy Moss? NCAA record of 13 straight games with a touchdown catch
-Holds school records for most TDs in a career (27) and most receiving yards in a game (270)

Mario Manningham, MICHIGAN
-Caught game-winning TD as freshman against Penn State, sending the Nittany Lions to their lone loss
-As a sophomore, grabbed 38 receptions for 703 yards and nine touchdowns
-Totaled 72 receptions, 1,174 yards and 12 touchdowns in 2007
-Finished his career at Michigan with 137 receptions for 2,310 yards and 27 touchdowns

Brandon Lloyd, ILLINOIS
-Finished career ranked second  in receiving yards (2,583) and touchdown catches (21) and third in all-time receptions (160) in Illinois history
-Consensus First-Team All-Big Ten performer after his sophomore season in 2001, helping lead team to the Sugar Bowl
-Finished career with a 28-game streak with at least one reception
-Caught 65 passes in both 2001and 2002 for a combined 2,072 yards and 19 touchdowns

Eric Decker, MINNESOTA
-Finished career with 3,119 yards, 24 TD
-Set the Minnesota single-season record for receptions (67) as a sophomore
-Broke his own single-season school record for receptions with 84 catches as a junior, while amassing 1,074 yards, good enough for No. 2 in Minnesota history
-One of three Gopher receivers to log a 1,000-yard season

Michael Jenkins, OHIO STATE
-Caught 165 passes for 2,898 yards and 16 touchdowns in his career
-Finished career with at least one reception in 38 consecutive games
-His 2,898 yards rank first in Ohio State history and eighth on the Big Ten career-record list
-Helped the Buckeyes capture the 2002 BCS National Championship
-Caught a career-high 61 receptions for 1,076 yards and 6 touchdowns as a junior