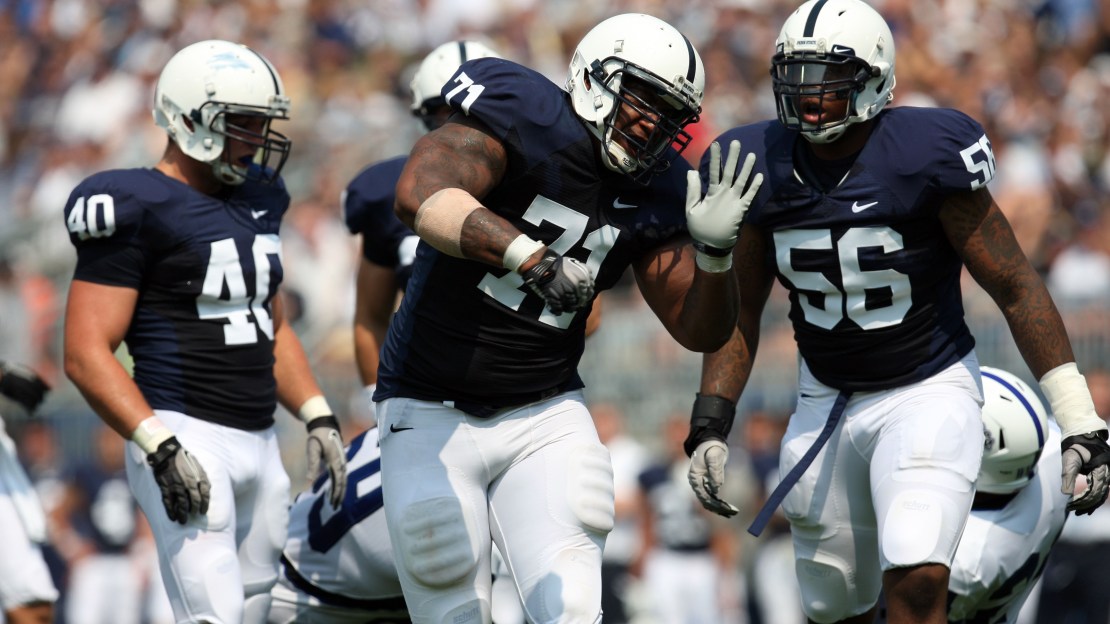 Prior to the 2011 college football season, the Big Ten announced the creation of 18 new trophies, including two for the new Big Ten Championship Game and two for postgraduate awards. Each trophy honors the Big Ten's rich history, with two Big Ten legends' last names on it (i.e. Nagurski-Woodson Defensive Player of the Year).

Every week during the season, BTN.com senior writer Tom Dienhart breaks down the race for the 14 annual trophies. See Tom's top candidates for each trophy following Week 8 in this post.

THE BUZZ: The Badger offense remains the standard in the Big Ten, ranking No. 5 in the nation in scoring and No. 8 in total offense. Credit the tandem of Wilson and Ball, a 1-2 punch that has few peers. But the electrifying Robinson is the quintessential one-man-gang who could grab this honor with a big effort down the stretch.

THE BUZZ: A close race. If Penn State remains in contention for the Leaders Division crown deep into November, it will be because of a defense led by Still. Borland is a Tasmanian Devil who is relentless from sideline to sideline.

THE BUZZ: This is a close race, with Dantonio getting a slight nod due to the fact his Spartans are one of two unbeaten Big Ten teams, Penn State the other. And no one expected that back in August. Joe Paterno and Ron Zook still have good chances to sneak up this list.

THE BUZZ: Young is the top rusher among Big Ten freshmen with 359 yards and four scores. Turner is a former quarterback who injects big-play ability into the Husker passing game. He has 15 catches for 243 yards and only will get better. Countess has been a revelation in a still-developing Wolverine secondary.

THE BUZZ: Wisconsin is an offensive line factory, and Konz is the next great one. The Husker ground pounders are led by Caputo in the pivot, who like Konz is a heady blocker who makes all the calls and blocks for a strong unit. Reiff may be Iowa?s top blocker since Robert Gallery.

THE BUZZ: Yes, Wilson looked human in a 37-31 loss at Michigan State, but he still hit 14-of-21 passes for 223 yards and two touchdowns. Most vital: He rallied his team from two touchdowns down by running and throwing for scores to tie the game late in a hostile environment vs. a great defense.

THE BUZZ: Ball paces all backs with 768 yards rushing and 17 touchdowns. Redd is coming off a career-high 164-yard effort last week and is asked to shoulder a bigger load of the offense than most any other running back in the Big Ten.

THE BUZZ: After a shoulder injury ruined 2010, Borland has returned to the disruptive ways of 2009 when he was Big Ten Freshman of the Year. He ranks No. 2 in the Big Ten in tackles and is fourth in tackles for loss in addition to being a heart-and-soul leader.

THE BUZZ: Jenkins has been one of the top wideouts in the nation, grabbing 62 passes for 987 yards and seven TDs, but he failed to make any big plays vs. Purdue. McNutt became Iowa?s all-time leader in touchdown catches (24) last Saturday with a career effort vs. Indiana on Saturday with six catches for 184 yards and three touchdowns, while Cunningham continues to stretch the field for the Spartans.

THE BUZZ: Pederson, along with Stoneburner, paces all league tight ends with six touchdown grabs, plus he has 19 catches for 262 yards. He looks like the next in a long line of recent standout Badger tight ends. Stoneburner is a safety blanket in a pedestrian Buckeye passing attack.

THE BUZZ: Maher paces the Big Ten with 13 field goals, nailing 81.3 percent of his attempts. Fera deserves special mention in that he doubles as a standout punter.

THE BUZZ: Webster may be the Boilermakers? MVP to this point, averaging 46.6 yards per boot. Buchanan ranks third in the league with a 41.3-yard average despite punting the second most number of times in the Big Ten.