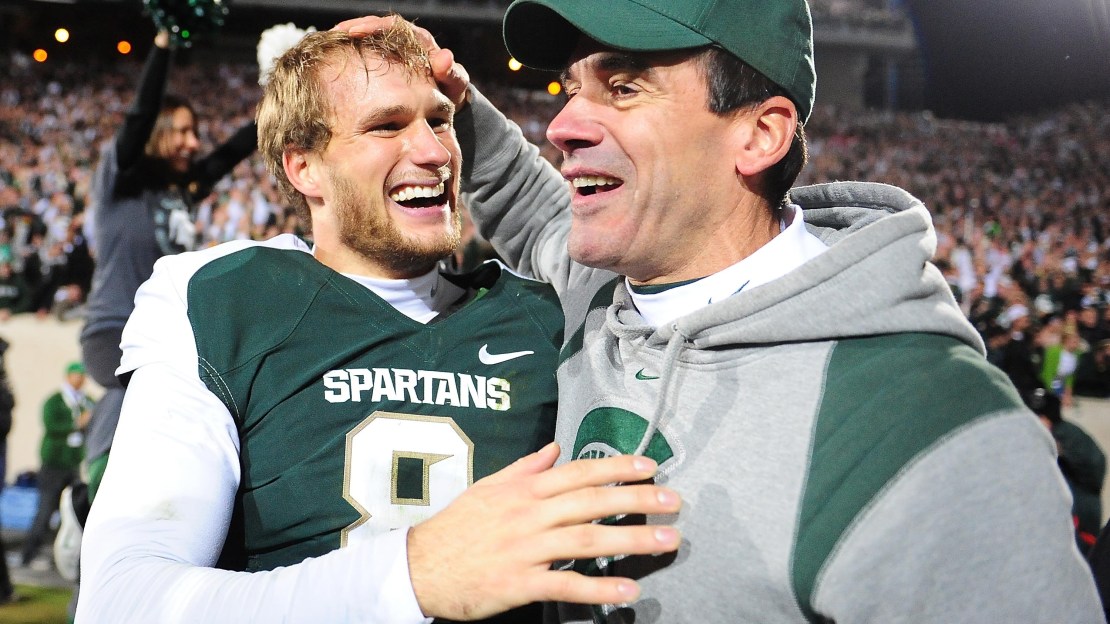 Every week during the football season, Brent Yarina posts his latest Big Ten Power Rankings. Week 8 featured one of the most exciting finishes in Big Ten history, as No. 16 Michigan State used a last-second Hail Mary to beat No. 6 Wisconsin. As for the power rankings, they are not meant to mimic the Big Ten standings. What fun would that be? They aren?t scientific, either. They?re simply Brent?s thoughts on where each Big Ten team stands after its latest game and entering its next contest. Agree? Disagree? Tweet @BTNBrentYarina. Watch our sideline interview with NU grad and SNL product Seth Meyers now and see the rankings in this post.

The latest BCS Standings are out, and Michigan State leads five Big Ten teams, at No. 11. See the Big Ten standings here. Catch up on all of Saturday?s action on our Big Ten scoreboard, with our blogger's Week 8 Recap and with our football video highlights. Here?s something fun for you: Rank our Week 8 top plays. Also, how did Big Ten products do in Week 7 NFL action? Find out here.

And now for Brent's power rankings:

1. Michigan State (6-1, 3-0) - The Spartans picked the perfect time to play the perfect game. In its thrilling last-second win over previously unbeaten Wisconsin, Michigan State didn't draw a single penalty, it blocked a punt for a score, it blocked a field goal, it tallied a safety, and it only committed one turnover. Its reward for beating the Badgers: a trip to Nebraska to face the 6-1 Huskers in a battle for the top spot in the Legends Division.
Last week: No. 2
Next game: at Nebraska

2. Wisconsin (6-1, 2-1) - It was a road game under the lights at a stadium where the Badgers hadn't won since 2002. On top of that, all-world running back Montee Ball missed action due to injury, the opponent didn't commit a single penalty, and it needed a last-second deflected Hail Mary touchdown to tally the win. Add it all up, and Wisconsin's BCS title dreams were squashed in Saturday's 37-31 loss at Michigan State. But don't let the loss make you think the Badgers are done. They still have a great shot at the Rose Bowl.
Last week: No. 1
Next game: at Ohio State

3. Nebraska (6-1, 2-1) - In its last two games, the Huskers have tallied their first home and road Big Ten wins. The latest victory wasn't as impressive as the final score indicated (41-14 at Minnesota), but it was a win and it helped make this week's Legends Division tussle against Michigan State all the more important. The winner of the game will be in control of its destiny, something Husker fans didn't think they'd be saying at halftime of the Ohio State game.
Last week: No. 3
Next game: vs. Michigan State

4. Penn State (7-1, 4-0) - Lost in all the talk about Montee Ball and Rex Burkhead, Penn State's Silas Redd continues to churn out serious yardage. In Saturday's win at Northwestern, Redd ran for a career-high 164 yards. The sophomore back hasn't run for fewer than 129 yards in the past four games, and he's averaging 141.5 yards per game during the span. Don't forget about the other side of the ball, either, where Gerald Hodges, Devon Still and company are making life tough on every opponent.
Last week: No. 4
Next game: vs. Illinois

5. Michigan (6-1, 2-1) - Denard Robinson and Michigan, no doubt, enjoyed the bye week following their physical game against rival Michigan State. The off week not only allowed the Wolverines, in particular Robinson, to recover from their bumps and bruises, but it gave the coaching staff extra time to analyze its first loss and prepare against another possible late-season swoon.
Last week: No. 5
Next game: vs. Purdue

6. Iowa (5-2, 2-1) - If Marcus Coker continues to run the ball as well as he has the past two weeks (263 rushing yards and four touchdowns), the Hawkeyes are dangerous and will be a threat in the Legends Division. The defense has its holes and lack of depth, sure, but James Vandenberg and the offense are quickly becoming one of the Big Ten's best units.
Last week: T-No. 7
Next game: at Minnesota

7. Ohio State (4-3, 1-2) - The bye week should have provided the Buckeyes with plenty of time to solve their passing woes. In its first three Big Ten games, Ohio State averages 6.3 completions, including just one in its last game against Illinois, and 89 passing yards. Boom Herron's return from suspension should help those numbers at some point.
Last week: T-No. 7
Next game: vs. Wisconsin

8. Purdue (4-3, 2-1) - The Boilermakers have been a very nice surprise through the first month of Big Ten play – so much so they are tied with Wisconsin for second place in the Leaders Division. Their lone loss came at division-leading Penn State, a game they could have won without a few self-inflicted wounds. Still, Purdue is 0-2 on the road, including a loss to Rice, and its next two games are on the road: at Michigan and at Wisconsin.
Last week: No. 10
Next game: at Michigan

9. Illinois (6-2, 2-2) - As well as things were going during Illinois' surprising 6-0 start, they're going equally as bad the past two weeks. The reason for the Illini's woes are multiple, but none may be bigger than their struggles in the running game. Perennially one of the top running attacks in the Big Ten under Ron Zook, Illinois is averaging 3.5 yards per carry the last two weeks, compared to 4.7 in its six wins.
Last week: No. 6
Next game: at Penn State

10. Northwestern (2-5, 0-4) - With Saturday night's 34-24 defeat to Penn State, the Wildcats have lost five consecutive games for the first time since they dropped six in a row in 2006. For all of Northwestern's struggles, Dan Persa continues to light it up. Since making his debut on Oct. 1, Persa has completed 98 of 131 passes (75 percent) for 990 yards and six touchdowns. During that span, however, the Wildcats have allowed an average of 38 points per game.
Last week: No. 9
Next game: at Indiana

11. Indiana (1-7, 0-4) - The struggles continue in Year 1 of the Kevin Wilson era. Through its first four Big Ten games, Indiana has been outscored 161-61, including Saturday's 45-24 loss at Iowa. The good news: True freshman quarterback Tre Roberson dazzled in his first career start, completing 16 of 24 passes for 197 yards and a touchdown, to go along with a team-high 84 rushing yards.
Last week: No. 11
Next game: vs. Northwestern

12. Minnesota (1-6, 0-3) - Another Big Ten test, another disappointing result. The Gophers lost 41-14 Saturday against Nebraska, meaning they have been outscored 144-31 in their first three Big Ten games. It won't get any easier, either, with Iowa, at Michigan State and Wisconsin up next.
Last week: No. 12
Next game: vs. Iowa