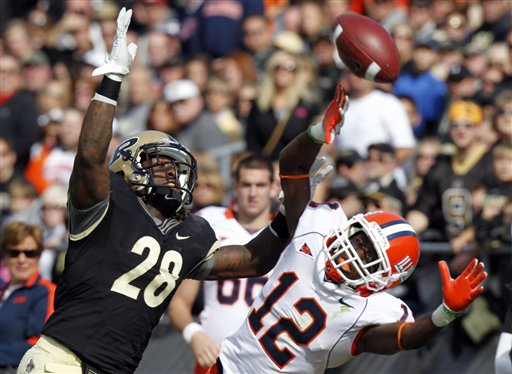 (AP) Caleb TerBush passed for 178 yards and two touchdowns to help Purdue upset No. 23 Illinois 21-14 on Saturday afternoon. Raheem Mostert ran for a touchdown and tackled the punter on a play that led to another score for the Boilermakers (4-3, 2-1 Big Ten). It was Purdue's first victory over a ranked team since beating No. 7 Ohio State in 2009. Illinois (6-2, 2-2) lost its second straight. The Fighting Illini scored on a 16-yard run by Jason Ford with 8:12 remaining, and a 2-yard run by quarterback Nathan Scheelhaase to cut Purdue's lead to 21-14 with 54 seconds to play. Read the full AP recap, see the box score and check out our Big Ten scoreboard.

FINAL: After building a 21-point lead, Purdue withstood a furious comeback by No. 20 Illinois and managed to pull out a 21-14 victory on Saturday at Ross-Ade Stadium. Caleb TerBush picked apart Illinois' (6-1) secondary, completing 16 of 25 passes for 176 yards and two touchdowns on the day. Jason Ford did his best to carry the Fighting Illini's offense, turning 10 carries into 81 rushing yards and one touchdown. Purdue (4-2) racked up 303 total yards. The Boilermakers complemented TerBush's passing with 127 yards rushing on 42 attempts. Illinois' offense finished the game having gained 366 yards, including 244 passing yards on 26 completions. The Fighting Illini's ground game balanced their offense, bringing 122 yards on 33 attempts.

FOURTH QUARTER: Purdue's Jared Crank led the offense in the fourth quarter. He ran for 17 yards and the Boilermakers stopped a late Illinois rally to win 21-14. The Fighting Illini scored 14 unanswered points to close the game. Illinois closed the gap to 21-7 when Jason Ford turned a handoff into a 16-yard touchdown to put the finishing touches on a 60-yard drive. A 90-yard drive that ended when Nathan Scheelhaase turned a quarterback sneak into a two-yard touchdown run helped the Fighting Illini narrow the deficit to 21-14. Illinois' Scheelhaase hit 200 yards passing for the game in the quarter, part of his 216-yard passing performance.

THIRD QUARTER: Illinois is on upset alert at the end of the third quarter, trailing Purdue by a score of 21-0. The Boilermakers will start the fourth quarter with possession on their own 20-yard line.

SECOND QUARTER: Purdue holds a 21-0 advantage over Illinois at the end of the second quarter in what would be an upset. The Boilermakers opened up the lead, 14-0, after marching down the field for a nine-play, 88-yard drive that ended when Raheem Mostert ran 21 yards to paydirt. Caleb TerBush's 28-yard pass to O.J. Ross from the 31-yard line pushed Purdue into enemy territory. The Boilermakers opened up the lead, 21-0, after TerBush and Jared Crank combined for a four-yard touchdown to end a four-play, 14-yard drive. The Fighting Illini's failure to convert on a fourth-and-6 set Purdue up to start the drive. Illinois will start the second half with the ball.

FIRST QUARTER: No. 20 Illinois is on upset alert at the end of the first quarter, trailing Purdue by a score of 7-0. The Boilermakers' defense shut down the Fighting Illini, allowing only 26 yards of offense in the quarter. Purdue struck first when Caleb TerBush and Justin Siller hooked up for a six-yard touchdown, the final play of a 13-play, 91-yard drive. The Boilermakers have the ball at their own 12-yard line to begin the second quarter.

View stats, see the best in-game tweets and track all the action on our Big Ten scoreboard below:

Chew on this for a minute, Buckeye fans: Purdue (2-1) checks in above Ohio State (1-2) in the Leaders Division.

Illinois kicker could not have done much better there. Guys lost track of the ball.

My ILLINI are stinking it up. Let's go guys. Get it together. #Illini

Purdue is one sack away from doubling its season total today. Scheelhaase holding the ball too long.

Illini, down 21-0 at half, really need to dig in in 2nd half/ w PSU, Mich, Wis next. Problem is, Illini look lost in every way.

Seriously #Illinois?! Did you bother watching any film at all?! Everybody knows you don't throw to #RicoIsland and live to tell about it.

Ummmm…. #boilerup. Yikes. Putting the Super in SuPurdueper. Up 14 and driving

Purdue looks resolute on both sides of the ball…well-prepared and motivated. Really good to see. Now, let's see if they can continue…

Beautiful drive by Purdue. This is a scary game for the Illini. Big test of their bounce-back ability

Third #Purdue scoring drive of more than 90 yards this season.